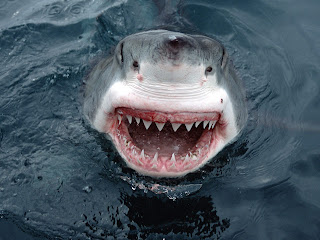 There are many ways to approach the annual event on the Discovery Channel known as Shark Week. One can ignore it. One can get angry that other people are enjoying the sharks (Randy). One can enjoy a ceaseless array of documentaries detailing nature's most perfect killing machine. One can declare sharks the new monkeys or pirates or bacon or whatever.

As a kid, I watched the heck out of Mutual of Omaha's Wild Kingdom (which led me to believe Omaha was an exotic place and Mutual of Omaha a totally cool company), and I watched a hell of a lot of Jacques Cousteau. I was born the year of the release of Jaws, and so sharks were sort of in the zeitgeist while we were growing up. Jason and I checked out the same shark books repeatedly at the library. We owned a few shark books. We had at least two action figure sets that I can remember which were about nothing but sea-exploring,* which really meant shark watching. 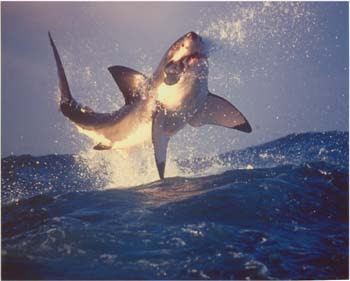 If this is how I go out, just know that my last thought was "THIS IS SO AWESOME"

Collecting shark facts wasn't that uncommon for us kids growing up. They could smell blood from a mile away. Their noses could sense electrical impulses. if you checked the contents of their stomach, you could find everything in there from fish, to a license plate to half a dog. Sharks had rows of teeth.

So, in short, I was pre-disposed to an interest in sharks. They were enormous, relentless things that wanted to eat me, and they were there, just beneath the waves.

Discovery Channel seemed to pioneer the best footage of sharks you were likely to see. I actually remember the first Shark Week I watched circa the summer or 1992. The KareBear had left town, and it was me, Jason and The Admiral left behind, and every night I'd watch a different shark documentary. And it was awesome.

My interest has waxed and waned over the years. I still like a good aerial stunt from a Great White taking out a seal. But, you know, a whole week is a lot of sharks.

This year, I'm watching some of Discovery Channel's Shark Week, as well as hitting both the Jaws documentary The Shark is Still Working and a screening of Jaws at the Ritz.

So, anyway, I think to over explain Shark Week is to over explain anything that comes on TV. Why do you like baseball? Law & Order? How can you watch anything on TV with roughly the same subject?

I dunno. The sharks are interesting. Always have been. Always will be. Watching humans interact with sharks, or watching sharks hunt, travel, leap out of the sea? All good stuff.

So, happy Shark Week, everybody.

*It occurs to me that a lot of the sharks we had that we used to play with these toys must have been cheap rubber sharks from the bin at the grocery.

But we totally had these sets: 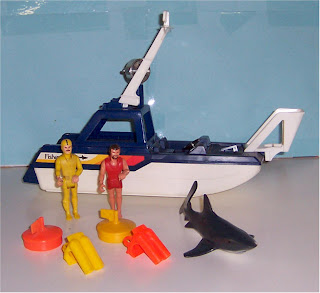 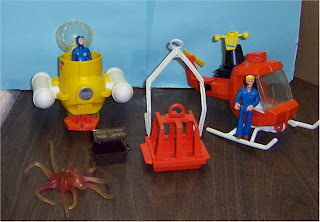 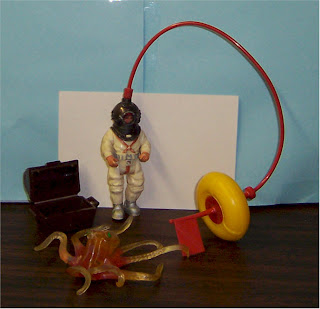 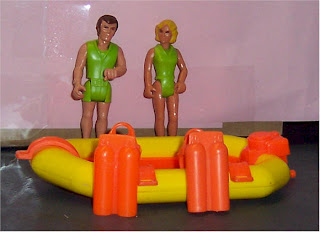 I don't know which Shark Week special it was we were watching Sunday night, but the guy who was sitting on the whale carcass taking pictures of the shark who was EATING the whale carcass for this year's Darwin Awards.