Two Events at Start of September

1) Intergalactic Nemesis - Live at the Long Center! Honestly, I have no idea what to expect. I knew artists Tim Doyle when he ran now-defunct comic shop Funny Papers circa 2001. I'd pick up his self-published work at the time, and still have copies of Amazing Adult Fantasy and Sally Suckerpunch somewhere.

THE INTERGALACTIC NEMESIS Live-Action Graphic Novel
Austin’s favorite sci-fi radio thriller comes to life in a entirely new form! Three actors once again portray a variety of characters as sludge-monsters from the Planet Zygon invade the earth. Only this time, their adventures are accompanied by more 1200 drawings by graphic wizard Tim Doyle, projected on the Long Center’s huge screen and accompanied by Graham Reynolds’ original score. Keeping Austin weirdly wonderful!

Tickets are a minimum of $14.99. I'm likely going to do this if anyone wants to come along. September 3rd and 4th.

It's nerd manna from heaven here in Austin. Each year on Labor Day, Austin Books has a massive sale. A sale that, if not contained, could break mens' minds. 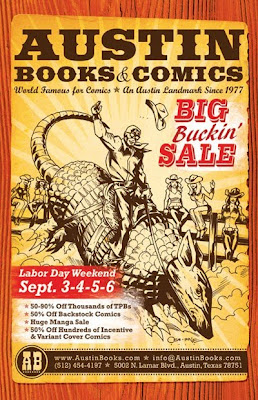 -50% Off Backstock Comics! (Back Issue Bins)

-Our Infamous Manga Sale... load up!

-50% Off Hundreds of Incentive & Variant Covers

-Lots more surprises to be announced!

The trade paperback selection is always terrific, and its never less than awesome to rifle through back issues at 1/2 off.

I'm sure Austin Books would love to see you! And you should come on down and see their new addition: a to-scale, shiny, Silver Surfer hanging out over the back issues.
Posted by The League at 8/04/2010 12:03:00 AM

Email ThisBlogThis!Share to TwitterShare to FacebookShare to Pinterest
Labels: events