Some movies I should have commented upon

A Kiss Before Dying - Its hard to watch this movie without thinking how its been emulated a 1000 times over since this movie was released.  Its not a bad movie, and it features Robert "Yeah, totally THAT guy" Wagner as our heavy.

The Red Shoes - People had kittens when this move was restored, and that was the first time I think I'd heard of it.  I missed its theatrical release but caught the movie on cable this week.  A movie that I was expecting to be "good" turned out to be truly a great movie.  Just masterfully handled.

Kiss Me Deadly - Man, this is the strangest damned movie I've seen in a long, long time.  50% detective, 25% celebration of sociopath, 20% noir and 5% sci-fi, of all the damned things.  I have very mixed feelings on this movie, but its really hard to ignore.

In a Lonely Place - Bogart and Gloria Grahame, directed by Nicolas Ray.  Its filed under noir, and I think I can see why, but its a great thriller/ character study and gets past the veneer of most noir and can feel almost awkward in parts as the characters tumble into distrust and their own miscommunications. 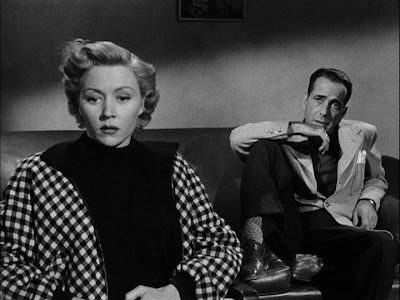