While the East Coast has been experiencing severe weather, and Louisiana has been grappling with a tropical storm, since the 4th of July, most of Texas has been dealing with record breaking heat by standards of both intensity and duration.  Add in the fact that it simply will not seem to rain here, and the Central Texas region, which is home to Austin has become a wildfire waiting to happen.

Fires of various sizes have been cropping up all summer, and its a credit to the firefighters that while we've definitely lost homes and property, by and large the disasters have not spread completely out of control.  Until now.

I'm afraid its gotten pretty bad out there.  My folks bought a house in North Austin they're retiring to before Thanksgiving, and were in town for the weekend for the UT/ Rice game.  Unfortunately, wildfires caught out in their area, and right now they're evacuated to my... sofa, actually.  Its fairly nerve-wracking watching the news and seeing the devestation.  And the crazy part is that Steiner Ranch isn't even the part of town hardest hit.  Bastrop, a former small town - now a bedroom community, is getting hit really hard.

Anyhow, I may be distracted for a while dealing with my folks' situation and real life, so I ask that you bear with us.

Here's The Statesman, our local paper, and their coverage. 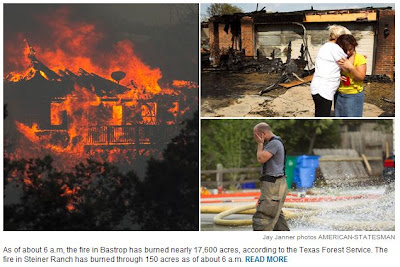 Good Luck. I love my parents, but too long in my house and I get crazy. I hope all is well.

A fire missed our house by 2 miles. Fortunately, the firefighters came to the rescue and stopped it. Everyone's fine in my neighborhood, except for a bit of a cough from the smoke and ash.

Matt, glad your family is safe. Sounds like the fires are now either in Bastrop or out further west.

Here's to hoping this isn't the new normal.

Jake, my folks were champs and I think we managed not to annoy each other. Lots of checking the news and websites for information. Not too much else.