Hey, Signal Corps!  While I was in Laredo, CanadianSimon emailed me about doing some reviews for Atomic Robo.  That sounded awesome to me as I was quite literally planning to start picking up Atomic Robo this year.  I'm a bit of a novice, and so Simon has graciously sent in these reviews, which also gets me off the hook for lack of content (and I'm going to see The Thing tonight with SimonUK, so I don't know that I'll be posting any time soon).

So I was hanging out on twitter the other day as I an wont to do and I noticed a tweet from Atomic Robo scribe Brian Clevinger who was looking for folks to review the latest installment of Atomic Robo: The Ghost of Station X. This was much too good of an opportunity to let slip by.

For those of you unfamiliar with Atomic Robo, here is a brief primer. Atomic Robo was created by famed inventor Nikola Tesla in 1923. Tesla was able to endow Robo with "automatic intelligence" as he called it and what is now commonly referred to as "artificial intelligence". Because Robo is, well a robot, and by definition is not limited to a regular humans lifespan we are able to drop in on him over 80 plus years of adventuring where he's taken on Nazi's, Lovecraftian horrors, alternative dimension vampires among other challenges. This also gives us the opportunity for Robo to meet such luminary historical figures like the aforementioned Tesla, Thomas Edison, HP Lovecraft, etc. 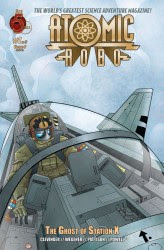 The Ghost of Station X is the sixth Atomic Robo mini series. However, knowledge of the previous stories is not necessary. As issue one opens Robo receives a call from NASA as some astronauts are in trouble on a space station and only have 7 hours to live. It is up to Robo and the folks at Tesladyne Industries to rescue them. Unlike most comics where the characters would immediately leap into their spaceship Robo and his team have to figure out a way to get to the stranded astronauts. There is a very Apollo 13 tension going on during the discussion on how to mount the rescue mission.

At the same time there is a building stolen from Bletchley Park in England with possible ties to Robo's past. Unfortunately, Robo is not able to divert himself from the astronaut problem so he sends the "B" team to investigate.

The issue ends on a great cliffhanger where Robo takes off in the rebuilt Aerospike to rescue the astronauts. 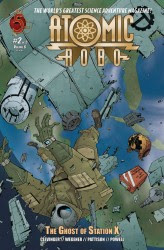 Issue 2 picks right up where the issue 1 cliffhanger left off. We see the folks at Tesladyne leaping into action to resolve this crisis. This is where Clevinger really excels as he bounces from character to character with each one having a distinct voice and motivation.

At the same time team "B" continues to investigate the theft of the building from Bletchley Park. Once the Tesladyne team is able to avert the crisis we begin to realize through information communicated by the characters in the book that the rescue of the astronauts was a diversionary tactic. Is Tesladyne Industries under attack? Was some unknown opponent trying to distract Robo from the mysterious disappearance of the building in Bletchley Park? Could it have been both? Tune into issue three to learn more.

Scott Wegener is doing some great art in this series. I absolutely love that he has more than one body type. Too often in comic books each male character looks the same as any other male character and each female character is depicted as a bombshell.

Look folks, I can't recommend Atomic Robo enough. It is a great book that everyone of any age can enjoy. Heck you can read any of these issues to your kids. I've been following this series for years and users of Comixology can buy the digital issues at a ridiculously low price. Please give this series a try either by grabbing some digital issues or pre-ordering the floppies.


This sounds pretty great!  If you've not downloaded the Comixology app or tried their site, I think they've got a good model going.  We need more comics like Atomic Robo out there making comics FUN.
Posted by The League at 10/18/2011 01:45:00 PM