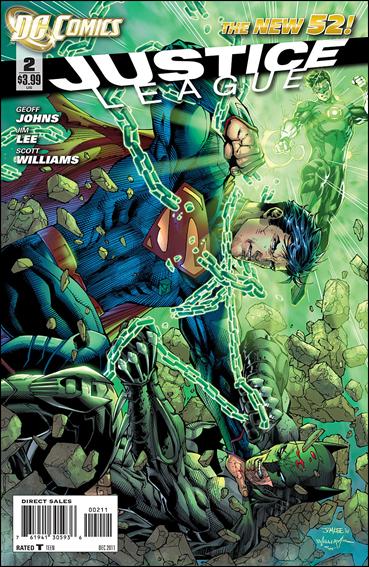 Having had read almost 3 dozen of the New 52, I'm a bit over the shock of these All New #1's not exactly having the best idea what a #1 might look like that's useful to new readers.  In this series, its clear that Geoff Johns will be writing for the trade.  He's counting on the fact that our new readers have familiarity enough with Superman, Batman and Green Lantern (and The Flash!) that we need not spend much time getting readers caught up.  It'll be several more issues before the band is put together, I'd guess, but when assembled, Johns will have put down a template for a possible treatment of whatever Justice League movie the comics-side of DCE must be day-dreaming about as the trailers for Avengers have spun the internet into a little tizzy.*


In discussing Supergirl #2, I mentioned that I was pleased with how Johns dealt with the "meet/ fight" clash that was set up in the final pages of Justice League #1.  I know its a staple of superhero comics, but its not really interesting anymore to see the "misunderstanding leads to exciting fight/ make-up/ team-up" pattern that's just been done to death since the 70's.  Instead, Johns uses the conflict to bring in The Flash and establish Batman as the dead calm mind in the chaos, and how these characters will be very different from one another.

In short, the brawl goes somewhere, provides some useful information and resolves itself while revealing character bits.  Not as much as we'd like after two issues, but its moving forward.


At some point post DKR, every single writer decided it was very clever to put their character up against Superman and demonstrate how their character would beat Superman.  Superman fan or not, this trend ultimately served to diminish the character within the DCU.  Superman losing should come as a shock, not as something you're so used to seeing that when this issue doesn't follow that path...

One thing I was hoping for in the New 52 was that DC would at least try to acknowledge Superman's unique place within the DCU.  Seeing him burst Hal's chains was extremely gratifying to me as a reader and Superman fan, but also...  because it makes sense.  I wasn't thrilled at two 2-page spreads in about 10 pages, but I was thrilled to see DC putting a marker down and saying "this is what Superman can do.  This is what makes him Superman and different from other superheroes".

I doubt the trend will continue (and we've already seen Supergirl #2), but I hope the architects will continue to remember how Superman stands out within the universe he created.

Meanwhile, we're getting more of the Vic Stone journey toward Cyborg-ness (a story I've never read in the original except in 1980's role-playing game supplements), which is handled with the subtlety of a hammer to the head, but still manages to effectively set up Vic Stone's character arc and future conflicts.

The overarching plot of an Apokalyptian invasion is confirmed, and I look forward to seeing what Johns and Lee bring to the table with these fan-favorite villains.

There's not a lot of content in this issue, although it seems like War and Peace in comparison to Supergirl, and I like Jim Lee, too, but with limited page count, I tend not to get super-jazzed about double-page spreads.  With the $3.99 price tag and filler supplemental material, I'm a bit annoyed that we're more than likely really paying Johns and Lee's fees and not for extra pages.  But it is what it is, and as a consumer, I have the option to quit paying it.

Lee is definitely doing some very nice work, and while I never buy comics on art alone, and I rarely talk about art, the tone is right for a big-picture comic about aliens and men in capes slugging it out and hoping to be taken seriously.  No, I don't think he "uses too many lines", but I do think his ideas about anatomy are occasionally interesting, but always lean toward a more powerful figure, and that's okay.

Still not sold on his Superman redesign all these months in.  That's got me concerned.  Its just too flat.

But, really, this feels like a flagship book.  Big heroes.  Great talent on everything from inking to coloring.  Its a nice package of a comic, and something I'd hand someone else who barely knew anything about superheroes, just to see them ask "so what happens now?"

Is it a game changer?  Maybe not, but it is a Universe Definer, and I appreciate Johns and Lee's attempts to make it interesting.

So far, I'm still enjoying this book well enough, but am ready for Wonder Woman to make an appearance, which she's scheduled to do next issue.

Haven't picked mine up yet. Looking forward to it.

Wait, what? Batman doesn't take down Superman in 5 seconds flat? Pffftttt! I'll never read this book as it is so unrealistic.

Exactly, Simon. I'll consider the DC relaunch a success if they take a few steps back from Batman always having everything perfectly planned for every situation, accounting for every variable, knowing or discovering immediately the fatal weakness of every opponent.

If Batman is so formidable, why not rotate some of Superman's villains into the batbooks? Then Batman can fight Doomsday, Mongul, General Zod, Braniac, Bizzaro and Darkseid.

Or maybe he should focus all his mental acumen toward finding away to keep the Joker, Riddler, Two-Face, etc. from escaping Arkham Asylum every few weeks.

From the interviews I've read with Scott Synder he plans to do exactly that with Batman. That is, the city of gotham will turn on him in a way he doesn't suspect. Apparently Batman's villain in this arc will be hubris. This is something that interests me and hey I think I can get the first issue now for $1.99 so I'll have to start reading it.

Don't even get me started with that revolving door policy at Arkham. Seriously though, no one has really invented a good Batman villain since the Ventriloquist.

That does sound interesting. I haven't looked at a new Batman book in years. I've been thinking about showing the new Catwoman series to my wife. You know, see if it'll add some spark to our sex life.

Speaking of Batman's convenient invincibility, is it me or is superspeed every writer's biggest foil and/or the most ignored power in comics?

@Jake Shore Ha! I don't think Catwoman is going to help your sex life at all.

Super speed, when you factor in all the other powers that it pulls along with it, makes it the best power in the world. Basically, if you can run fast enough you effectively become invisible. Your brain and muscles must be able to react faster in order to keep you from running into things, etc. etc.

That's always been part of why I've liked The Flash, from the first issue I picked up at the start of the Wally era.

Creative writers seem to have some interesting ideas of the potential. But, yeah, it also has plenty of room for abuse at the hands of other writers.

I still like early, supposedly boring, Flash. They were just having a good time.

@jake - I dunno if Catwoman is going to help you out, but maybe things are colorful at your house.

I will say - after hitting tow costume shops this year - there's no shortage of "sexy" superheroine costumes available. Good golly.

Well, the new Catwoman book looks like little more than a Kama Sutra for geeks, so you can't blame me can you?

But thanks for looking out for me. Too bad. It would have been worth seeing the look on my wife's face when we get into bed and I bust out Catwoman #1, "So honey, what do think of this?"

Finally got my copy. I agree with your observations for the most part. Like the first issue, #2 just doesn't get very far. There's so little exposition. Mostly splashy pictures and snappy dialogue.

The writing's OK. I really enjoyed the introduction of the Flash, but I wasn't particularly impressed with these lines:

The art is good, but not Lee's best. After seeing what he did on his Batman run, we all know what he's capable of. The pencils and inks look, at times, rushed and a little sloppy. Lee's layouts are good, as usual and the colors are great.

I like where the story is going. I just wish it would get there faster, and with a little more substance.

Yeah, you won't find me trying to defend Johns' dialog.

Given what a train wreck I've found so many of the relaunches, at least this one seems to be doing what it set out to do.

I may beg to differ on Lee's art, but after reading him since the 1980's, its a continuum, I guess.

I should clarify that I'm judging Justice League on a whole different scale given the talent involved. I dig the book so far, despite my critiques.

Same goes with Lee's art. Look, he's probably my all time favorite, so all I can do is nitpick. To my mind, his stuff is still head & shoulders above 90% of artists out there. I'm judging him only against his other work.

His pencils on Uncanny X-men, WildCATs (just the art!), and especially Batman was just amazing.

But I've also seen his stuff when it looks a little rushed, not as polished, and without the attention to detail.

For me Justice League is somewhere in between.