As I understand it, Tintin is a global phenomena that somehow never exploded in the US the way the character has entertained generations across good chunks of the rest of the globe.  Its telling that the release of The Adventures of Tintin: Secret of the Unicorn came to the US months later than the rest of the world.  Because it is not "ours", this has meant low-flying expectations for the boy reporter here in the states and a welcome not unlike how we treat foreign exchange students when they arrive at our high schools in clothes not bought at Foley's. 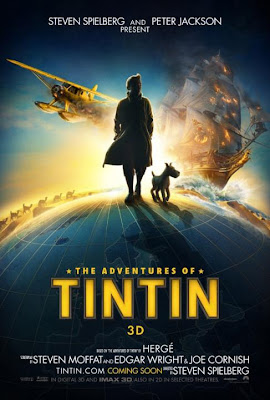 We're talking about the movie here for a number of reasons.  1)  It is based upon the comics by Belgian comics-smith Hergé.  2)  It is a high-flying adventure movie.  3)  Its the creation of a wide-range of geek friendly folks from Steven Spielberg to Steven Moffat.

At the Alamo Drafthouse here in Austin, the pre-show rightfully showed clips of adventure serials, Indiana Jones homages, etc...  before the movie.  The comic strips in which Tintin appears actually pre-date Indiana Jones by about fifty years, so I want to make this clear to the legions of Americans who believe that action stars come in either Sylvester Stallone or Jason Statham models and find the idea of a Belgian action hero hilarious:
A)  Van Damme  B) this is the most pure adventure movie to hit the screens in the US in a decade.  And that sort of worries me about American movie-making.


I saw the movie in 3D, which it was designed for.  And while last summer I threw in the towel on 3D movies after enjoying Thor more in its 2D presentation,  I might be reconsidering thanks to what I've seen in Hugo and this film.

Parents should be aware: this is an old-school adventure film, and while I believe its all-ages, I have no doubt many parents will freak out that our heroes pick up guns from time to time and one of them drinks (a lot).*  There's a lot of shooting at our heroes.  They occasionally get smacked around.  It is, however, a world devoid of the concept of sex (short one comment by Captain Haddock), so you've got that going for you.

What this movie is not is another very safe, absolutely stress-free lesson in numbing your brain until you can't feel it any longer like Alvin and the Chipmunks (which is kicking Tintin's ass at the box office right now).  Instead, The Adventures of Tintin is one long action ride in which the tension almost never lets up, our characters face an endless array of potentially deadly fates, and basically thumb their nose at danger at every turn.

All that is grand, and I hope people start to hear about this movie, because the story alone is probably worth checking out.  But from a technical perspective, this movie realizes all sorts of new potential for an entirely CGI film, from how motion capture works to the stunning beauty of the virtual landscapes and sets, to the look in a character's eye.  But on TOP of that, Spielberg goes nuts with the potential for choreographing set pieces.  As crazy as the Indiana Jones action sequences were, once Spielberg can move the camera anywhere, he does.  And the effect is astounding.

All that said, the movie also has Spielberg's sense of what makes for threats, credible and fantastic.  It has his sens of timing for how a scene should play out and work to draw an audible gasp from your faithful blogger here (remember the propeller scene from Raiders?  Well, we kind of revisit that, in a way.).

Nobody is going to think this film is going to change the world from the standpoint of a script, etc...  the sort of adventure tale its relating is the stuff we've already mined in Indy movies, Scrooge comics and a hundred other globe-trotting adventures.  Its light on character, and all plot and set-pieces.  And that's okay.  Sometimes that's exactly what a movie needs (I don't need for all of our characters to have an arc of self-realization that's going to wind up a shredded mess, anyway).

Anyhow, if you see it in the listings, its worth considering for the PG-friendly crowd.


*You know...  we all grew up with Han Solo and Luke shooting the @#$% out of villains left and right.  We also grew up with boozers in a lot of our media (hell, we meet Han as he and Chewie are tying one on).  Heck, Mrs. Hannigan in Annie struck me as a bit of a drunk.  Frankly, I find it baffling that our generation chooses to lose their minds over this sort of thing in kids entertainment.
Posted by The League at 12/26/2011 11:18:00 PM

I liked it. Good flick.

The "boozing makes you more fun" motif seems a little dated to me, but I guess if you're looking at this as a lighthearted period piece (as it was meant to be), it works.

1) Of what little Tintin I've read, I don't know how you'd get around Haddock's boozing and stay true to the material

2) I think its time we returned to days of yore when drunks were a welcome part of every media, including that of children.

Yeah, I know I'm a buzzkill, but it just seems like it's romanticizing something that's not all that great in real life. True to the story or not, Haddock would be in desperate, desperate need of a 12 step program! But I've definitely never previously seen a movie that made such charming use of the hallucinations that can be brought on by a hardcore alcoholic going through withdrawal!

I don't disagree that its a complication. What I would point out for parents out there is that this is at least partly about Haddock's moment of clarity and the start on the road to sobriety, but in a very light-handed manner.

I was a bit surprised, myself, how much the movie played with the boozing. Yes, its part of the source material, and I think its worth respecting that, but I totally do get why this sort of thing has gone out of style.