The newest Austin location of The Alamo Drafthouse has opened very close to my house, and I am extremely impressed.  The tradition of service and experience continues, as well as the obvious differences at this location which reflect The Alamo's continual desire to improve their theaters.

It should be noted, the other Alamo locations are hampered a bit by the fact that all were built out of existing structures.


The new space is laid out with ideas like audience management in mind.  The queues of the Alamo South don't exist.  Instead, it works almost exactly like Southwest Airlines' seating, with groups going in by letter and number (something I'm becoming pretty damned accustomed to of late).   My lesson on this:  get your tickets as early as possible.  Yeah, if you're a "let's go to the theater and see what's showing!" at 7:00 on a Friday kind of movie-goer, the Alamo may not be for you, but its probably not for you, anyway.  You're going to want to know up to five days in advance if you're going to take in a film.  Now, you're going to also want to organize your friends a day or two ahead of that, so you can all enter together.

The menu hasn't changed much from the other locations.  However, I'd note the following:


The Alamo South has had a great "UFO's Blowing Up Texas" theme since it opened.  The lobby is full of old-timey carnival ride parts suggesting an epic battle between airplanes and flying saucers, with a mural of a drive-in getting vaporized.

The new location has gone for a sort of "man-eating plant is out of control" theme.

Rather than regular marquee style signage, we've got lovely flatscreens.  Now, the pattern on the walls looks super-familiar, and I thought it was from The Shining, but now I don't think so.  I'd love some help.  I've actually emailed the Alamo to ask. 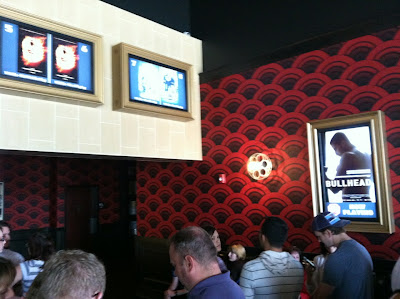 Here's the other side of the lobby.  No film showing during the day thanks to too much daylight, but you can see how big the expanse is, plus the lobby roof is high, which will help when crowds are packed in.  Anyone who has been the the Alamo South knows what its like to get crammed in there. 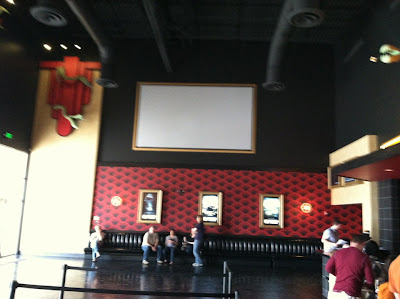 It looks a bit like the standard candy counter when you walk in, and I was thrown off (I am sure this will freak out the Circle C neighbors who go to the Alamo for the first time down here).  But its just the ticket counter, far away from the sunlight.  They also had a bar back there I should have taken a picture of.  The 400 Rabbits also has a door from the parking lot and from inside the theater.

The table set up is a bit different and seems like the next generation after The Village.  One table per two seats.  Perfect for seeing a movie with Jamie.  Also, unlike at The Ritz and South Lamar, no more acrobatics if you need to get out to go to the bathroom.


What you can't see is that its level there in front of the table, so like at The Village, its a bit more intrusive when the waiter comes.  The waiter peering over the tops of your table isn't the situation here, and Jamie didn't love it.  I thought it was fine.  And I didn't worry about cutting my scalp open on the menu holders coming and going when I went to pee before the movie.

I didn't think to grab pics in the hallway, but the storage of 35mm genre films was right out there behind glass and soft lighting.  Also, some key Mondo posters.

Oh, and projection is the highest standard digital.  Absolutely beautiful.

I'm headed back Monday night to see From Russia With Love and have a martini or two with Jamie, Simon and JAL.  Looking forward to seeing whatever print they bring of that movie.  We're also trying to out the "priority seating" system, so I'll let you know how that goes.

This is so cool. I would love to have something like this where I am.

That wallpaper is out of a classic film, but I cannot recall for the life of me which one.

I am really hoping they write me back and tell me. Its driving me nuts.