So.  No one will be seated during the amazing chicken leg sequence!

I can't recommend KiIller Joe (2011) for a general audience, so let's get that out of the way first.  The movie made the hard choice to (a) get made and (b) not water itself down, and that meant an NC-17 rating. I can't even remember the last time I saw a movie with this rating, but even R-rated movies generally have a few swears these days and its mostly intended to keep people from bringing their kids with them to the 9:00 show of the latest Scorsese picture.  Basically, nobody really has the guts to do a Hard R movie these days (except the Hangover guys, I guess) and so an NC-17 should be box office death. 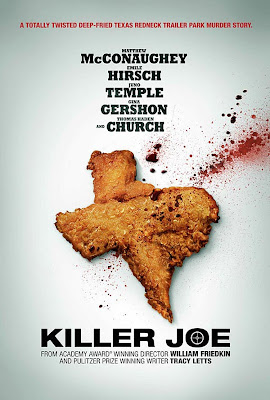 The movie is based upon a play by Tracy Letts which ran off-broadway some 14 years ago.  Its been adapted here to the big screen by Letts and directed by William Friedkin, director of The Exorcist, The French Connection and a host of other films, but the last movie of his I saw was Blue Chips (which I actually quite enjoyed).

It's a deep-fried southern noir in the darkest corners of white trash America, and reads somewhat like one of those news stories you can both believe occurred - predicated on the notion that all of the players were unsympathetic, near-illiterate dopes whose grasp was further than their reach when it came to planning - and still find the fact that someone ever started this plan to begin with stupefying.

But, like I say, it feels a hell of a lot like a true-crime story, in its way.

Chris is the son of Ansel, who long ago divorced Chris' mother, Adele.  Chris's sister, Dottie, lives with Ansel and his new wife, Sharla.  It seems Chris is in deep to some bad guys for a few thousand dollars, and his solution is to include his father and step-mother in a scheme to have his mother killed so his sister, the sole beneficiary of Adele's life insurance, will pull in the money which Chris, Dottie, Ansel and Sharla will split once they've payed off a local killer-for-hire (who also happens to be a police officer).

If you're seeing noir seeping out of the projector's sprockets, there's a good reason for that.

It's a terrific cast, with Emile Hirsch as Chris, Thomas Hayden Church as the brain-dead Ansel, the always underrated (and still amazing) Gina Gershon as Sharla.  People take their swipes at Matthew McConaughey, but in a lot of ways, the guy arrived in Hollywood just as action stars were being sidelined for CGI and non-threatening pouty boys in movie leads.  Swagger wasn't terribly welcome except in certain kinds of movies, and so the guy's career got relegated to odd casting like being "the guy" in a "Kate Hudson falls over a lot" rom-com.  Older and with some of the shine gone, McConaughey takes a great big damn gamble with his role as a sociopathic, deeply corrupt cop/ killer-for-hire who will be a model for "how bad can a bad guy get" for a long, long time.

On the flipside, Juno Temple as Dottie plays the picture of innocence.  A girl with the body of a woman, Dottie isn't all there upstairs and still has pictures of Justin Bieber on her walls and, despite the white trash splendor or her folks' situation, she's a pretty happy kid - who sparks something even more awful and dark in Joe.

There's a hell of a lot of grim in this movie, and its hard to argue that a lot of choices don't feel excessive, but that's an R-rating talking.  Friedkin wants it all up on screen as the family tears itself apart with some petty, selfish and deeply corrupt decision making - and toning it down might have produced just another forgettable Hollywood homage to noir, just with a bit of white trash southern flavor.

Frankly, I don't shock all that easily when it comes to movies (what actual people do never fails to blow my mind, however), so the violence, nudity and other aspects of the film registered - I'm not dead - but they all felt like part of the whole, and not just there for shock value once we'd gotten past that very first scene.