The eighth in the line of Parker novels, The Handle places master thief Parker in several odd positions.  Most of the prior stories occurred above the Mason-Dixon line and detailed Parker working with a team of professionals.  This one has Parker working, for reasons of his own, alongside The Outfit, the bloated, corporatized mob from the first three or so Parker books.  The score settled between the two and pragmatism the word of the day, and The Outfit has hired Parker to crack a nut they can't solve.

Off the coast of Galveston, by forty miles, a casino has been built by a man with no affiliations with The Outfit.  Of course, that's bad business to have vice occurring so close to Outfit territory but with them getting nothing, so they'd like to see if Parker can rob the place blind and then shut it down. 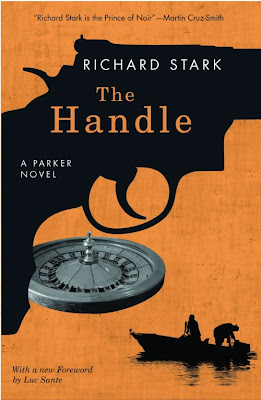 The target is in a place with no exits, in hostile territory (the island is owned by Cuba) with the mob looking over his shoulder.  And then things get complicated.

The story features repeat characters Alan Grofield and Salsa, and seems to introduce several new characters I'd expect we'll see more of.  While the story ups the stakes for Parker to a level I found hugely surprising, somehow the story didn't grab me as much as the shades of inner struggle we saw in The Seventh, and felt more like a caper with a lot of problems, somewhat like The Mourner, but on an epic scale.

All in all, it's a fun book, even if, as a Texan, I'm not sure I bought some of Stark's thinking on geography (for example: he describes an uninhabited island 40 miles off the Texas coast as covered in jungle.  Probably not.  Nor would the casino described stand up to the summer storms out in the gulf.)  Nonetheless, a fun book, and a good segue as the next Stark book I'll read is the first Grofield solo book.

Nor am I sure anyone would walk away from some of what happens to Grofield (spoiler - he survives).

And, man, I don't know what happened here, but this book was absolutely riddled with type-o's.  Very strange to see that many in print in a 160 page book.  I think I found 2 or 3 over 3 John Carter novels the last time I noticed type-o's in a book.

Still, I enjoyed the novel and I blew through the last 70 pages extremely quickly as the action heated up.  Interesting, unexpected ending in true Parker fashion.
Posted by The League at 9/01/2012 01:21:00 AM