Jeff Lemire is currently doing a tremendous amount of work at DC Comics, and not just his series Sweettooth.  Prior to the New 52 he took on Superboy, and was doing a great job - certainly telling less headache-inducing stories than what we saw starting last September.

But many of us came to know him from his work on the Essex County trilogy, meditative, ethereal stories of past colliding with the present.  His latest book, The Underwater Welder feels a bit like a fourth installment in the Essex books, but in a new location (the hard cut coast of Nova Scotia), with water and diving a significant and ongoing theme rather than the wide open prairie/ near tundra of Essex County. 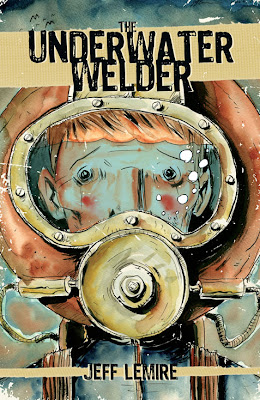 Jack Joseph is 33 years old and has made his living as a welder on the oil rigs that can be seen from the shore of his hometown.  His wife is very, very pregnant as he heads out for one last stretch of work before the baby is born - all in the week around Halloween, a day that resonates with Jack back through the years.

Lemire recognizes that past informs the present, and unlike the previous books in the Essex trilogy, the anxiety of the coming of fatherhood informs the future.  Despite the 224 pages of book, the comic feels much more like a particularly dense short story, in part because of Lemire's elaborate sense of pacing through visuals.  While far from an illustrative approach, Lemire's work stays on model in its' scratchy/ sketchy style, but paced brilliantly over the page count as each panel holds significance to the forward motion of the story - panels breaking up time, changing from one object to another, or otherwise manipulating the reader's point of view.

I hesitate to give up too much about the book, but it feels like Lemire is moving onward and upward with his work, instead of continuing to repeat himself - especially in the denouement of the book.  Rightly so, TV writer Damon Lindelhoff intros the book as an episode of The Twilight Zone, which featured tight vignettes that took characters through a strange or supernatural occurrence that provided some greater relevance in their life or gave the audience a moment to think a bit about what it meant for the character (I am still haunted by the idea of the man who wanted time to read, and in the wake of nuclear holocaust had all the time in the world.  Until he broke his glasses.  I probably think about that at least once a week.).

The story reads like fable or myth, and that's to its strength.

I did wonder how rushed Lemire felt to finish the book with his other assignments in queue.  The ending, while entirely satisfactory, lacked the pacing of the preceding set ups.  But perhaps I read the book too quickly.