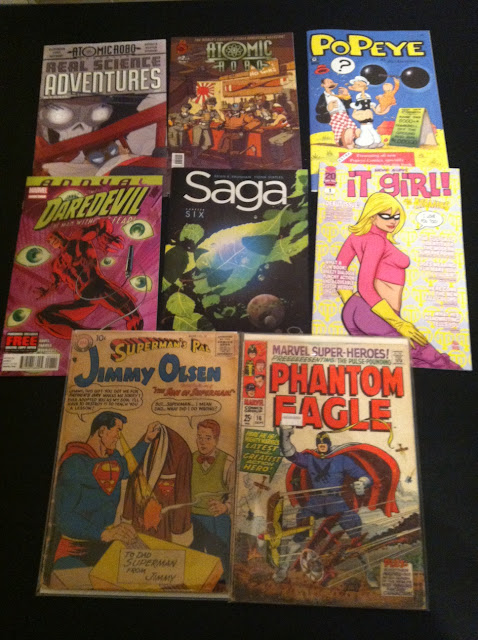 So this is what I picked up after 2 weeks away from the shop.

2 issues of Atomic Robo (ongoing series and a mini), Popeye ongoing #1, a Daredevil Annual, Saga #6, the new Allred project - which is an old Allred project, It Girl!  I have no idea what It Girl! will be about, but I'm betting that at least I'll like the art.

And I came across Superman's Pal Jimmy Olsen #30 in pretty iffy condition, but it's a book I've been lacking from my Jimmy Olsen collection and one of my favorite Jimmy covers, so there you go.

The Phantom Eagle I picked up on a whim, but it's a Marvel war book from the 60's-era Marvel and obviously meant to grab some of that sweet, sweet Enemy Ace money.  Several years ago Garth Ennis used the character in his book War is Hell: First Flight of the Phantom Eagle.  I hadn't thought much about the character since, but the cover jumped out at me and I figured it was a good addition to my aviation comics.

Yes, I sort of buy and collect military aviation comics.

I also put a few sheckles down on my lay-away copy of Action Comics 101, a comic that I will one day actually have in my home.

Digitally, I've picked up the one-shot Busiek and Lieber comic, Thoughts on a Winter Morning, published here by MonkeyBrain Comics.   It's a lovely slice-of-life story, and makes you wonder what else Busiek would be writing about if he walked away from superheroes and whatnot for a bit.  It's a nice meditation on time and perspective, and uses the medium of comics beautifully.  At least, it seemed so on my laptop on guided view.
Posted by The League at 8/16/2012 12:43:00 AM

I'm glad to see the Atomic Robo love. I confess, I buy the collections on Comixology whenever they are available. I was just re-reading volume 4 two days ago and I laughed out loud at the last panel of the "Why Dr. Dinosaur Hates Atomic Robo" story. I don't want to spoil it on anyone who hasn't read it but it is a really funny homage to a famous panel from the X-Men.

So has Saga been as good as people have been gushing about? I saw the first trade is going to be $10 which sounds like a great introductory price.

It's good, but I'm going to switch to trades. This is a marathon and not a sprint. Nothing is ever as good as the comics press would have you believe when more than two of them decide they like something and it somehow spirals into The Best Thing Ever. But it's interesting, and at $10? Sure, why not?

I still have the problem with Vaughn's writing that while I generally like the books, the characters always feel a little whispy - that maybe there's something there but we never really feel like we know all that much about the characters, and in a monthly format, that's a drag. But even in trades, I quit reading Ex Machina because I wasn't sure what I was reading anymore after a while and didn't miss the story or characters when I put the trades away.

Cool, well at $10 I'm going to get the trade for sure. That seems like a great value for 6 issues of a comic.

As a counter point, I paid $21 after a discount at my LCS for Hulk Season One. Weighing in at 136 pages it is about 7 comics worth of story but then you have to take out the title, art pages and the copy of Incredible Hulk #1 by Aaron/Silverstri that they reprinted in the back to bump up the page count. So, it is more like 5 issues of real story. So $10 for 6 issues of Saga seems like a huge deal.

I have read to the bitter end of Ex Machina and I must tell you that I threw down the book after reading the final story. Man that ending pissed me off. Luckily I did not damage the book as it was a library copy.

One advantage of Saga in floppies is the extremely amiable old-school letters page—something I'm guessing will be missing from the trades.

So far, I'm a big fan, though I'm a bit behind myself, having just picked up 5 and 6 yesterday and not having read them yet.

Soooo, howabout that "It Girl" art? Were you like me and expecting to see Allred's inimitable style?

Kind of a downer, eh?

Yeah, I try not to do posts on books that I don't like, but I didn't even finish the comic. It wasn't Allred (which I didn't know) and it felt aimed at someone other than me. It just felt like generic Marvel-influenced hero-ing. Rich and Norton are two creators who I never click with, and if I'd even noticed they were the talent on the book, I'd have saved myself a few bucks.

I'm sure it's good for somebody, but it all felt very "been there, done that, thanks, but no thanks".