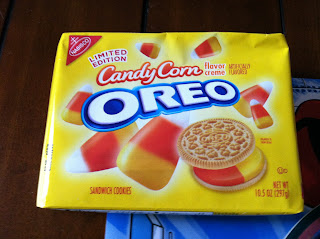 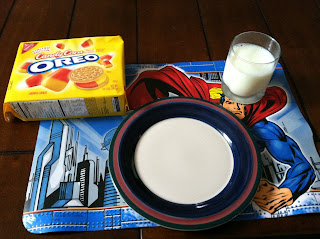 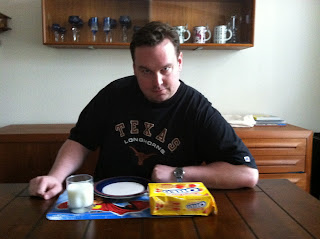 Yes, it's time once again for A Very Special Taste Test.  This time we're looking into "Candy Corn Oreos", an exclusive to Target stores for this fall season.  My special skills have been requested by our Berkeley branch, and as we knew this challenge was both unique and possibly life threatening, we feel like the old gun slinger called back into action one more time in the name of the greater good.

You need SCIENCE made, we will MAKE SCIENCE.

Fact #1:  I love Oreos (or their superior but less well known predecessor, Hydrox).  But as Oreos are about as good for you as a spoon full of lard, I tend to steer clear of them.

Fact #2:  I also love candy corn, but limit myself to one bag per fall.  It's basically corn syrup left out to harden, so it's best if we don't think too much about it.

I have seen one or two other reviews online, but both started off with the premise that this was going to be gross, and, surprise, surprise, they found the cookies gross and made a big deal out of it.  Well, people, that is NOT SCIENCE.  Our job is to simply try the cookies out and record our reaction.

As seen above, the only addition to our pure sampling of the Oreo is a glass of skim milk. 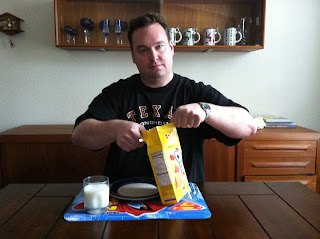 OBSERVATION:  Immediately the smell hits me, and it does not smell like candy corn nor Oreos.  Now, I am not very familiar with the vanilla Oreos, but that seems to be the basis for the cookie.  The cookie portion does not immediately smell like anything, but a smell much like cake frosting for grocery store cakes erupts from the bag like Vesuvius and seems to emanate entirely from the lard/ sugar middle. 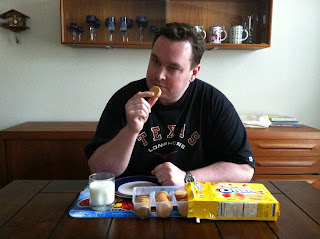 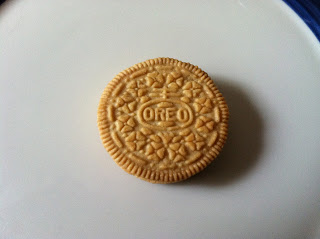 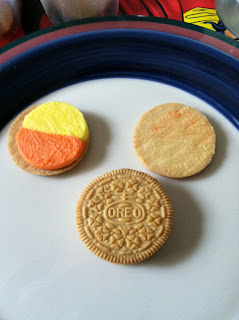 The images above show both the cookie in it's entirety and opened up to investigate the innards.  It's a candy corn bit of frosting, and so one observes the festive fall coloring which which the lard and sugar has been injected.  I try not to imagine the machine created that made this happen. 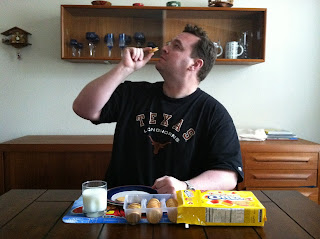 We sample the bouquet one one more time. 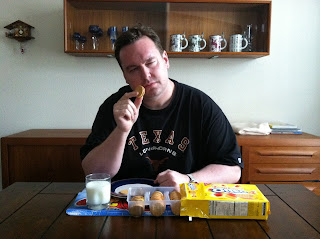 Above, the subject ponders how 5 billion years of history, consumption of foodstuffs, agriculture, technology, marketing and evolution led to this. 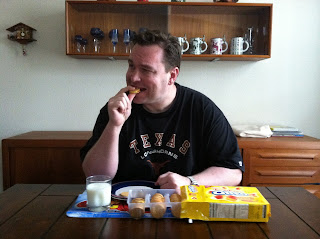 The first bite.  Note that the cookie is not twisted apart.  We're going for whatever the Oreo Corporation intended. 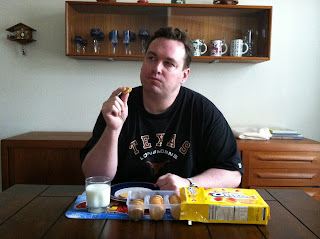 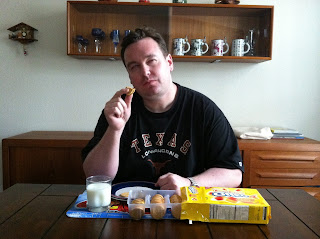 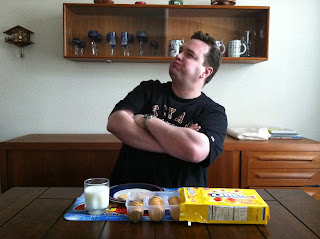 Yet more thinking and tasting as mastication reaches a climax. 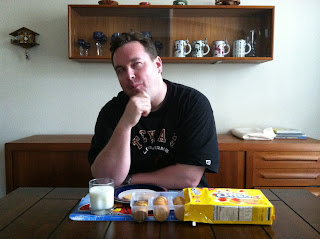 Well, it's really oddly sweet.  The comparison to frosting is not far off, but it's not as immediately stomach wrenching as office-party/ grocery-store cake.  It's a bit tastier than that, but we're not detecting any of the "mallow" flavoring we associate with candy corn.  It's a zippier sweetness than the usual Oreo frosting, and it's hardly cut by the vanilla cookie, and has no chocolate to cut the taste at all.

Actually, they're kind of okay, but we see no comparison whatsoever to actual candy corn.  We're calling it now:  The Candy Corn is all in the coloring.  Comparing the taste will lead to confusion, misery and heartbreak. 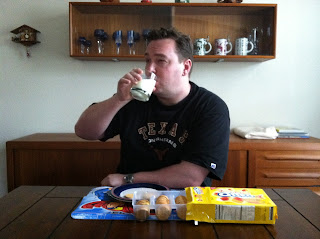 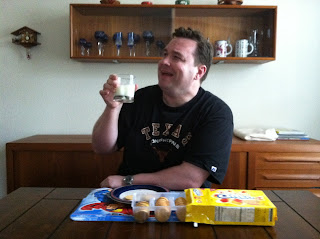 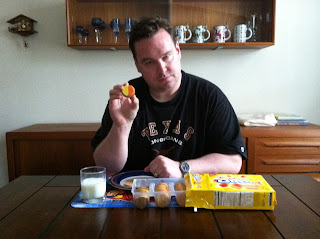 Clearly the frosting/ lard/ sugar middle is the selling point here, and somehow it's even easier to disassemble one of these cookies than you might be used to.  I'm assuming there's some reduction in whatever chemicals seal together the cookie bits and the lard bits in a good 'ol regular Oreo. 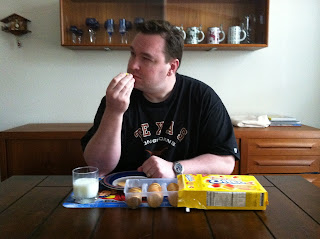 The smell changes not at all. 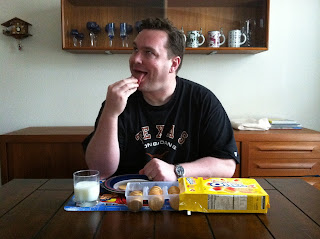 The first lick is quite useless.  I think I'm using the wrong tastebuds. 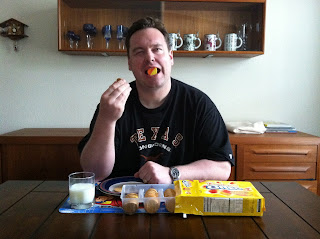 Undeterred, we separate frosting from cookie altogether and are impressed with how it holds up as a single disc of chemical novelty.

It should be noted, my feelings on the frosting didn't really change after eating it solo. 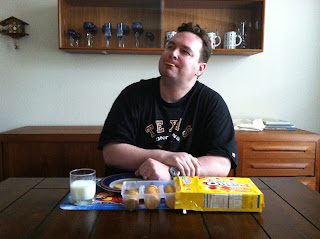 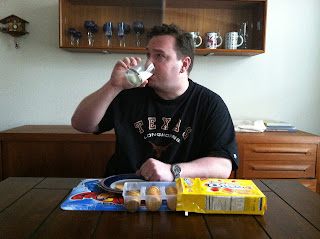 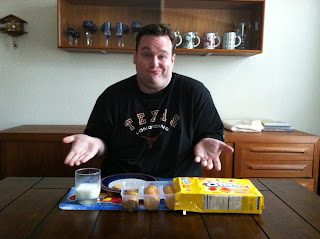 VERDICT:  I dunno.  It's not awful.  I don't know why people were taking to the internet to make faces and high-pitched whiny sounds about it.  It's a cookie, and it's better than your average generic cookie off the shelf, but it's also really, really, really sweet. 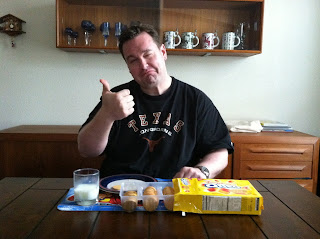 GOOD ENOUGH:  We're not going to throw stones.  It's not a homemade snickerdoodle, but, by definition, it is not a homemade snickerdoodle.  We also like the idea of being able to stop after about 3 or 4 of these things.  It's sort of like - by the time you're 30 you know you never need more than 2 donuts.  If you develop the same rule of thumb with these, you'd be fine.  And they'd be a fine treat to sit next to the decorative gourds you're going to put out on your dining room table when company comes over. 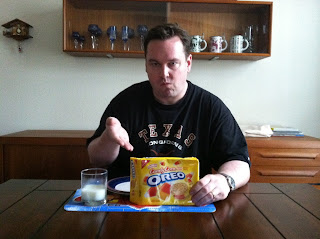 So why NOT Candy Corn Oreos? 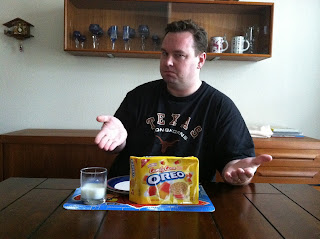 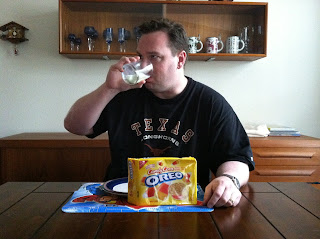 This is hilarious. Thankfully, even with all your tweets/FB posts about these (I hadn't heard of them otherwise), I have not been tempted.

I can't buy regular Oreos. I'll eat the entire package in one weekend. I will not tell you about the Hostess Cupcake Incident of 2007.

Long ago on a previous blog, Taste Tests were not a staple, but they were a feature.

You can also see our less formal approach, some bad haircuts and our kitchen from the house in Arizona.

The taste tests sort of culminated in the notorious Christmas taste test of the Jones Soda Holiday Pack.

Nobody ever really recovered from that incident.

You had me at, "a smell much like cake frosting for grocery store cakes erupts from the bag like Vesuvius."

Also, I will straight-up cut a man for a handful of Harvest Mix.

Oh, yeah. The little pumpkins? That stuff is usually what I get rather than the straight Candy Corn option. Especially if they have the brown candy corns mixed in.

Damn son. You did science to them cookies. Next you'll be getting a job at Tesladyne Industries.

I couldn't get past the creepy David Copperfield expression in the first photo.

That's my "we're about to make SCIENCE" face.