When World War II broke out, Bong headed to the Pacific Theater where he piloted a P-38 Lightning to 40 confirmed kills and likely shot down other enemy planes that could not be confirmed.  To earn an "ace" ranking, by the way, one needed confirm only 5 kills.  So, he was 8 times better than that.  And all in the incredibly dangerous battleground of the skies over the Pacific Ocean where every trip up was likely to end poorly. 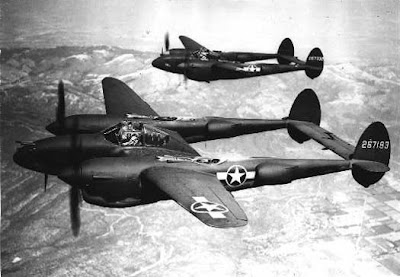 The P-38 Lightning was a remarkable aircraft, and it's now permanently tied to both the Pacific Theater and to Ace Dick Bong.


I note that Bong put an image of his best girl on the nose of his plane.  An odd thought when you consider one of his tactics was to get really close to an opponent before opening fire.  Meaning this lovely young lady's face may have been one of the last things those guys saw.

As always, take a look around the internet.  Bong's combat record is amazing, and we didn't really do it justice here.

This is such a great post. Fascinating. I did have to go look him up, especially because you had that teaser about his death. HOW? Awful, awful.

I read a really fantastic book earlier this summer called Code Name Verity, about a woman pilot in WWII (which they actually had) and her best friend who was a spy. Fantastic book. And you're right, those tin cans looks so vulnerable. What bravery.

I need to look up that book.

Yeah, the efforts of the WACS and WAVES don't get discussed enough, but there were definitely women flying cargo runs over dodgy territory. And, of course, we'll never really hear much about the intelligence work women performed during WWII.

The Russians sent up women as fighter pilots during WWII. Look up "The Night Witches" sometime.

When you have a minute check out Bernie (Bernard Fisher), a pilot who was still flying out of Pleiku when I arrived there in April 1966. He was an everyday courageous A1E pilot who one day did something very special.Make sure you get the full story.

Holy. Cow. Yeah, we're writing that one up.