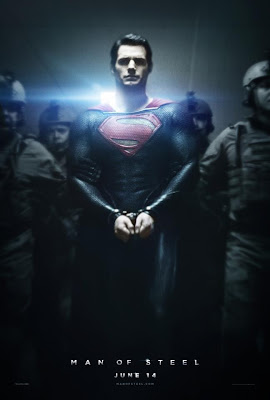 The comics have reflected the distrust that would materialize with an appearance of Superman in books like Waid's terrific Birthright and more recently in both Geoff Johns' Secret Identity and the rogue Superman of the New-52 facing down with Lex Luthor and Sam Lane leading the military industrial complex to face down a living weapon not under governmental control.

If there's an image that maybe can turn the perception of Superman on its ear, its the image of Superman in shackles surrounded by the minions of authority figures.  It plays on a lot of ideas - not the least of which is that we automatically root for the misunderstood good guy (see Batman, Spider-Man, etc...), and we love to distrust and look down on the nitwits in positions of power - in the 80's it might have been corporate tycoons, but these days it seems "the guvernmint".

If a rockstar, rapper or actor gets street cred from trouble with the law, why not a Man of Steel?  In a lot of ways, it makes far more sense, and it does go to Superman's roots.  He can't have started as a duly deputized agent of the cops and friend to law everywhere.  Is this the image that brings relevancy back to The Man of Steel for the pop culture pundits?  Dark in tone as well as content, no smile, no circus-performer suit and the outsider status clearly front and center...  it's like pop culture pundit catnip.

And, of course, the image raises so many questions.  Why is he in this position?  Why doesn't he merely walk away?  What could have led to this?

I don't know.  I do know that it's not what people expect when they think about Superman, and so if it drives a bit of interest in how this situation could ever even happen...  then it followed the Mort Weisinger formula of "cover first, story second".  And it's a good formula.  If making you want to see what's going on inside the cover enough to pay the price of admission, that's all right.

I mean, you sort of want to know what's happening here, right? 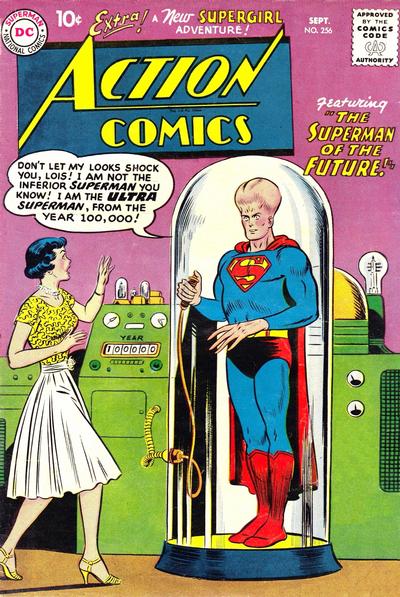 I'm good with the formula.

The purpose of Man of Steel is to bring Superman to a new generation, and for the second time in less than ten years, WB is taking a chance on Superman at the box office.  We'll see what happens.  This is the same character that's been considered too old timey and old fashioned to find relevance in the modern zeitgeist.

It's just one image from the movie, and I can probably figure out the scenario that gets Superman there without thinking on it too much, but for a lot of people, this is that Mort Weisinger cover, and we'll have to see what will get folks into the theater and embracing the character all over again.

The movie won't suck if they remember to get him to do something "super".

Well, since I think he goes toe-to-toe with Zod and Faora in this movie, we should be okay, I think. And it's Snyder. If he can slow down the film to show Superman doing nifty things, he's going to do it as often as possible.

In no way am I sold on this movie as I haven't seen a real trailer yet, but I think everyone is aware of what didn't work with Superman Returns.

I mostly liked the last movie but I would have preferred more Superman catching planes than brooding Superman. Not to say I want a mindless slugfest but I'd love to see some more spectacular feats of strength by Superman. Why can't he punch a tsunami to save a small costal village for instance?

we'll see what this movie brings. I really have no expectations other than Superman v. Zod in a royal smackdown in the 3rd act.

Probably about 45 minutes of them punching each other destroying Metropolis causing untold deaths that will never be touched upon. In other words a Zac Snyder jam.

I sort of expect so. I have a hard time believing Snyder will have presence of mind to show Superman saving the kids on the bus or stopping the flood from flattening the small town.

So you're saying that he doesn't have the subtly to show Superman saving someone from suicide, not by catching them but rather by talking to them? You're probably right.

Here's the real problem- Zack Snyder is not a good director. If there's gonna be any hope for a decent product here, you better really hope the producers and writers play a huge role in this thing and that Snyder isn't doing more than implementing someone else's vision. Otherwise, even if there are some decent concepts involved, they'll be left on the cutting room floor in favor of simple style. Snyder, if he has a strength, finds it in executing other people's ideas, and when he doesn't really seem to have a great grasp of those ideas in the first place, the result can be a real mess (see Watchmen).

That's more or less it in a nutshell. I have very low expectations of the movie, but that doesn't mean I think it'll flop, and I imagine it'll be service for the sort of action the X-Box/ Movie-going crowd wants.

Do I expect the nuance of All-Star Superman? You know... because that scene exists on paper, it's possible someone has seen it and wanted it for the movie. But Singer swiped Ross/ Dini's imagery from "Peace on Earth" and it was this odd, perfect moment in an otherwise messy movie. So who knows...

I'm not expecting much, and I think as long as I set my expectations low, I won't walk out angry, just disappointed that Snyder confirmed my suspicions.

I actually don't have a problem with this. And I agree with all of your reasoning. But I like it for another reason. I think the image is powerful because it shows someone who is basically a God, humbling himself and letting himself be judged by his peers. I think that tells you a lot about who Superman is. I generally try to avoid Christian analogies (even though I am one), but I think there is something Christ-like in the image. It evokes Jesus' willing arrest and judgement at the hands of his people.

It's certainly a striking image, and I'm not sure what it portends for the film. I don't necessarily mind a darker tone, so long as they get the character right. I have no problem, since we are dealing with his origin story, with the idea that people would be suspicious or frightened of him at first. But I don't want to see a dark, moody Superman. That would just be a disaster. Christopher Reeve, and to a lesser degree, Brandon Routh, projected goodness, humility, and wholesomeness. I hope Henry Cavill is able to do the same, even if it looks a little different. And while I'm excited for a movie that really shows what Superman can do, I am also uninterested in a one hour slugfest with on and off slow motion. I'm trying to stay cynical, but it's hard not to be excited.

I don't think you are wrong about the messianic influence of that poster. Frequently Superman is depicted as a messiah like figure, in fact the original creators of Superman Siegel and Shuster borrowed parts of his origin from the story of Moses.

fellas, I think that's a good read on the scene.

Here's to The Hobbit and the first real trailer, coming in about 8 days.