The pile, however, reveals exactly what kind of "old man" reader I now am.  The titles mass around Action Comics, The Shadow and Popeye.  I've got other comics, too, like Stumptown piled up, but I may not be the market for "crazy new ideas" in books I'd be sampling, which, mostly these days it just feels like recycled better concepts.  I have had all the ninja/ zombie/ vampire/ vixen/ superteam action I need.  Even most crime comics leave me cold when I pick them up and try to compare them to Rucka's work, or the Parker adaptations.  I flip through some of the rest of the stuff on the rack (and there's always a steady stream of other folks doing crime-ish work), and it's just money, boobs and badly drawn guys in badly drawn suits with gold jewelry on their fingers getting shot to hell.

The truth is, when I think about spending time and money consuming "stories"...  there are movies, TV shows and  books out there I'm reading or listening to via Audible, and they're simply more worth the time than a lot of comics trying to emulate what the books, movies and TV shows are doing better.  And they're not $3.99 for 20 pages or a few minutes of read time (for the love of Mike, that is not value.  Action Comics #1 was 64 pages for ten pennies.)

I picked up Frankenstein, Alive!  Alive!  for the art - which is exquisite b&w - and stayed for the story.  I was never much more than luke warm on Steve Niles' work I'd previously encountered, but there's a maturity of storytelling in just two issues so far that I wasn't anticipating.  That's a terrific book, and again, worth it for the price of the Bernie Wrightson artwork alone. 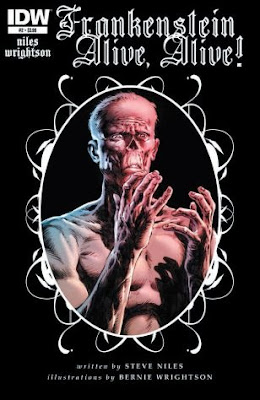 The book that's like a wee bit of sadness with every page is the Joe Kubert Presents anthology from DC.  It was clearly started under Levitz as publisher, and harkens back to a better era at DC, and a better era of craftsmanship.  That first issue points toward the Alex Raymond illustrative style in the Hawk-couple story, telling the first Hawkman story in over a decade that didn't make me want to sort of poke myself in the eye.  It's simply told and beautifully illustrated, and is so at odds with putting poor old Rob Liefeld on a Hawk-title, it would take all night to discuss the dissonance.  And, of course, the passing of Kubert and knowing that this is the final word on the matter is all the harder. 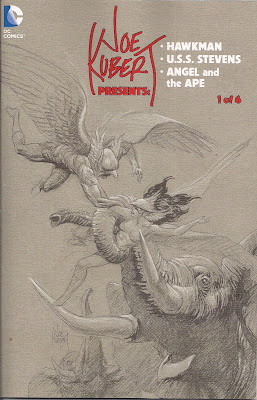 I've gone from picking up 6-10 floppies per week to picking up about 10 per month, and that number is okay by me.  I just want to make time to enjoy the comics I've got.

In the meantime, I do want to call out the first issue of Mark Waid's Indestructible Hulk.  If you enjoyed The Hulk in The Avengers as a movie, this may be a great option for you.  I am totally excited to see what Mr. Waid does on this title, and history shows:  I am not a Hulk fan when it comes to comics.  But this...  this I'll stick around for.

As I said - funny about the "not working out" bit.  Everyone has been telling me I look thinner lately.  My boss, a co-worker, my mother-in-law...  Yeah, i've been sick A LOT this year, and that has something to do with it.  I also haven't been pounding away at weights at the gym, which made me physically bigger and also made me really hungry quite often.  So I think what some people are seeing as "thinner" has been me noticing the diminishing muscle mass this past month, but for other people - I look skinnier, which is supposed to be healthier.