I considered listing this one as a noir, but it's more or less really a 1950's G-Man thiller mixing gangsters, fifth columnists, monkeys and Audrey Totter.

The movie opens on Montreal (?) where an organ grinder and monkey wait outside a building at McGill University where they snap picks of an unsuspecting French-Canadian scientist from a camera hidden in the hurdy-gurdy.  A cop spots the iffy organ grinder, and gets straight-up murdered by the oddly dated stereotype.

Turns out our organ grinder is a Fifth Columnist gathering info on a physicist, and then it gets complicated. 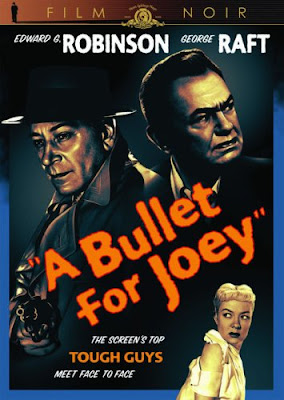 Edward G. Robinson plays a wisened Montreal detective, Audrey Totter plays a moll pulled back into the action by George Raft and asked to seduce the scientist.  Bodies start stacking up and the Canadians and US G-Men are on the case trying to figure out what the heck is going on around this fellow.

Virginal secretaries get seduced by seedy con-men, gangsters get bought off by communists and people keep forgetting they have guns.  Also, Audrey Totter improves her golf game.

It's actually a pretty good thriller, and you could easily see a remake with less slow-moving, Dad-aged leads like Robinson and Raft.  Mostly notable for the Cold War vibe, casting of Peter van Eyck as a Commie, and the appeal to look out for fifth columnists in your work, whatever it might be, it's not so much propaganda but a movie that understands its era and audience.

It also deploys the latest in crime-busting technology from the era, like... microscopes!  Weird versions of composite sketches!  Radio!

It's an odd film in that I actually very much liked the story and players, but the actual execution of the narrative left me a bit cold.  It seemed to fill the first half of the film with exposition and occurrences that felt like they could have been managed quite differently and with more punch with a different script.  Totter is great as the former bad-girl who still knows the score, and I'm a fan of the Double Indemnity take on Edward G. Robinson as the moral compass who sees the angles but who is still processing the evidence.  A far cry from Little Cesar.

I'll slap "noir" on the movie, because I know others might drop it in that category, but I don't think it has the same undertones that I normally associate with the genre.

A watchable picture, certainly, and worth seeing as you can tell, like FBI Girl, that the studios were suddenly concerned not just with the Cold War but ensuring their status as part of flag-waving/ anti-Commie America - all while, in this movie, playing good neighbor with Canada.