Yup.  The little movie about teenagers murdering each other and rolling in the media's late 80's obsession with teenage suicide like a pile of autumn leaves.

It is, of course, impossible to imagine anyone bankrolling this movie any time after about 2000 A.D., and it's entirely likely the receipt of this script to a studio in this day and age would mean FBI alerts and investigations.  Still, there was a time when a guy in a trenchcoat pulling a .357 out of his pocket and firing blanks in the faces of two burly jocks in the high school cafeteria was considered hilarious.

I consider myself privileged to have experienced high school in an era before metal detectors, clear plastic backpacks, helicopter parents, "Teen Mom", 24/7 News Cycle angst. and a celebration of popularity on each and every teen-oriented show on TV.  I did not avoid blaming metal bands for the ills of society, and the phrase "juvenile delinquency" still carried some cachet before we decided, en masse, to pretend that all kids are special snowflakes.  And this movie is a product of the era around when I entered grades 9-12.

It's fair to say that the film hasn't aged well, even as it continues to look like the jokes told out back of high schools all across America where moody teens tried not to get caught smoking, the shadow of a decade of dead bodies in public schools looms over the movie and - in its way - doesn't exactly presage actual violence, but doesn't resort to blaming video games, gay marriage and name-a-pundit's-personal-poison, and rather looks at the ecosystem somehow we pretend to not know was there, when high school is, really, the last common denominator of a shared experience for the vast majority of Americans.

It's also gratifying to see "nerds" and "geeks" in a movie from an era before the idea was co-opted.

I still think this movie is - in many ways - wickedly brilliant, and after having not watched it except in pieces in probably more than ten years, viewing it from beginning to end again really punched home what a high wire act the script performs.  Movies like Mean Girls and TV shows like (insert anything from ABC Family) pretend to upend the alter of teen popularity, stomp their feet about it, but - in the end - no matter what comeuppance befalls their Heather #1, there's always a sort of implicit agreement that popularity is important in and of itself and it always comes off a bit like a circuitous route to the feelings that must come with popularity or attaining popularity itself, just on a Mary Sue's terms.

Heathers isn't about exploring popularity, but it recognizes popularity as the blunt force instrument that it is for influencing students, campus administration and parents.  Most puzzling as an adult watching the movie

The film both skirts the atrocities performed by the protagonists of the film (which it acknowledges in a way that I don't think I gave the film credit for as a kid), and manages to pull it all back with a winky "Jesus, High School, right?" nod that you can appreciate even as a middle school kid, but as an adult, you sort of wind up going along with the horror because - yeah.  High school.

The movie feels around the contours of actual teen suicide (all the rage in the popular press in the late 80's), teen angst, the uselessness of authority figures and the inevitable cruelty and somehow systematic approach that enables bad behavior to start getting rewarded at the same time you're earning a driver's license.  Parents and teachers are clueless, administrators are just trying to keep the monkey house from exploding, and men of the cloth drone on in bizarre, disjointed, meaningless soliloquies.*  And somehow even the pop anthem is a knowingly soulless trash tune with a plea as silly as "Just Say 'No'" with "Teenage Suicide - Don't Do It!".   It's cold, cruel satire - and it's not like anyone escapes unscathed. 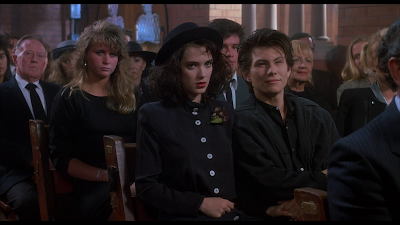 The mood whips back and forth, and I still remember the uneasy feeling from the first time I watched the movie and it was all played for laughs right up until Veronica is giggling at a joke at the funeral of two football players and one of their young sisters looks back to see who is laughing.  It's a pretty clever dig at the audience for going along with the joke.

The conflicting ideas of teen sense of immortality and power and a romantic obsession with death fuel the movie.  Even as we stare in shock as the bodies of Ram and Kurt, we're pulling mineral water out of a sack in a dated gay joke (but at least the timing is good).  The movies starts by asking what you'd do at the end of the world with all the riches you'd need available, and it's sort of the defining question for youth and all the possible opportunity before them, just before they get snuffed out one way or another.

The biggest problem with the movie is that once you get past the first two acts, Jason Dean's motivation and ethos are clear as mud.  He may be escalating the plot by wanting to plant a Norwegian in the boiler room, but... why?  Does he just want to watch the world burn, after all?  And what does it mean that he goes boom at the end of the movie?  He does some handwaving about the "@#$% you!" this will be to the world, but it feels oddly tacked on - as oddly placed as his complaint that "nobody loves (him)".  Clearly something he believed he could attain through Veronica, but by then, she wasn't going to be celebrating with him in the debris.

That's a pretty big structural problem, and while the ending is "cool", I'm afraid that it dilutes a lot of what came before it.  Yes, there's something circular in Jason Dean taking his own life, and for all his bravado about how to make the world a better place by killing the bad people - he does seem to realize he's the worst egg of the batch and does himself in.  It's a "boom" everyone hears, but nobody knows what occurred (and I'd guess they never will).

Maybe asking for moral clarity is a but much, but at least when Veronica seizes the throne, her first act is to dump prom and plan a night in with Martha Dunnstock.

I'm not sure if it's even okay to still say you like this movie as (a) an adult and (b) in 2012.  But it's an interesting film not just for the satire, but for the perspective.  Its not a movie that wallows in punditry's ideas about how bad things happen to young people - and it shakes it's head at the willingness of authority figures to embrace their personal agendas and keep them from ever looking at what actually happened (in our case, a sneaked cup of Drain-o from vengeful 17 year-olds).  As detached as the press seemed from the reality of high school experience when I was in high school - and the bizarre-o interpretations that appeared on TV in shows like Saved by the Bell and 90210, I wondered then - as I do now - what high school the talking heads attended and what they missed or had forgotten since graduating.

The movie acknowledges what horrible little @#$%s the average high schooler really is, whether it's Heather #1 or the guy gunning for Ivy League acceptance or the guy who wants to put a bomb in a lion's butt.  And that we grow up into these weirdo adults who aren't any help.  That's a pretty tough pill to swallow.  Maybe Mean Girls played with the idea, but it wallows so much in Lindsay Lohan's transformation and sad music as she abandons her pals that it misses the part where Heathers starts at, where all that's already in the past - and the adults around Lindsay Lohan are reacting less and showing up more as part of Tina Fey's pals needing jobs.

The movie isn't perfect - far from it.  But I think it also shows a wit and edge that's lacking later high school satires that recycle the same tropes with nothing to add.  It wasn't well appreciated during its theatrical run, and found a second life on home video and cable where it found the audience that didn't know it was waiting for this movie.

I'm still a fan, and as much as I want to watch it without the past fifteen years of history hanging over my head, I can't.  But I can at least try to appreciate what the film tries to do, and that it was made at a unique time when getting this movie out there was even possible.

I remember loving this movie when first I watched it. It seemed like a slightly more realistic portrayal of high school albiet with more deaths. Now, I want to go watch it again.

I love my dead gay son!

Great write-up and I remember seeing it in theaters in 9th grade and just being ecstatic at the portrayal of the high-school eco-system.

I know what you mean about the cognitive dissonance hearing adults describe high-school when you're actually attending it.

I haven't seen this in ages. Now I want to see it again.

However, my take on the Dean character's motivation for blowing up the school, way back in high school when I saw it, was his frustration with the life he had, not being able to see past high school, and trying to emulate his father.

I'd like to see how well that idea holds up if I watch it again.