The evening was looking pretty dull, I don't mind telling you. We had no plans. The hour grew late, and finally, somehow we settled on the faded glory of an Austin now receding into the distant past.

You can have your Paul Qui fancy-schmancy fusion bistros. Food is what reminds you of home, and I grew up in this town when we still had armadillo races as a form of local fun. And back then, we ate our pizza like we had nothing to live for. Conan's Pizza has only a few locations left after the expansion in the late 80's and contraction of the late 90's. They haven't redecorated since putting any of the Conan's in place, and they had a particular look back then that lingers to this day.


If you're wondering, why yes, they LOVE Conan the Barbarian.  You can't tell from the pic above, but most of the art is either Frazetta prints or Frazetta knock-offs.  Not too many other places would it seem like part of the tradition to eat under a Molly Hatchet album cover, but at Conan's, it's part of the ambiance.

The pizza you want to get there is called "The Savage".  Get it deep dish with a wheat crust or you're kind of just wasting everyone's time.  The Savage is literally every topping they've got.  You will absolutely feel sick after eating it.  But, let me stop you now and say, if you don't eat The Savage, neither I nor the staff nor other patrons of Conan's have any real reason to respect you.


I did limit my Savage intake and thought I might as well head next door to the DQ for a cone, so long as I was attacking my own GI tract.  I was a few feet inside the door when I noticed that Dairy Queen has added a new item to their menu: 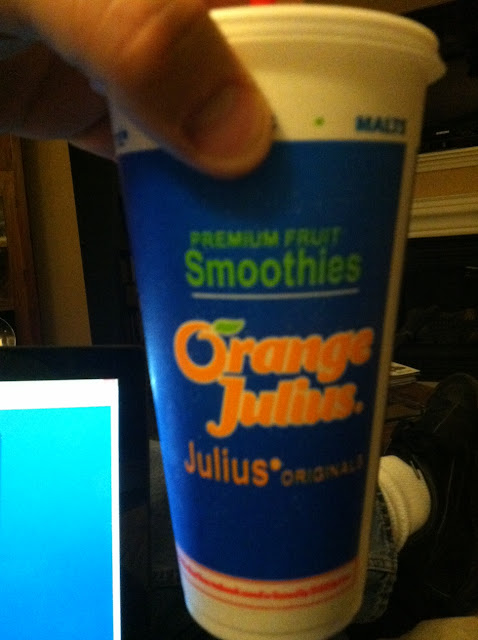 It's a small tragedy that Orange Julius disappeared from shopping malls circa 1993.  It's only about once a decade that I stumble across an Orange Julius stand.  There was one in Chandler, AZ in the mall, and it drove Jamie crazy that I would get my Orange Julius when we went there, which wasn't that often.

I don't know what her beef is with Orange Julius, but I suspect she has some Orange Julius related tragedy in her past she just hasn't revealed yet.

Anyway, the whole way home she was sort of railing against the Orange Julius like I'd somehow even suggested she have one.  All I want in this world is to have my Orange Julius in a judgement free context, but I know that will never happen.  In this way, my life would make a fine Russian novel, I think.

I stepped out of the DQ and looked over at the parking lot for the Tex-Mex place next door, and this young lady caught my eye.

I'm pretty certain that sheep's next few hours are leading up to her becoming someone's Sunday Brunch Special at Aranda's #3 here in South Austin, but maybe not.  But, you know, I don't really know why else you'd have a sheep in the parking lot of a Tex-Mex place at 9:00 on a Saturday night.

Still, not often does one see a sheep in a t-shirt in a parking lot, even in South Austin.

Coulda been dinner. Coulda been that someone was just pickin' up their South Austin lawn mower from a friend.

Actually, not only do I like your ending to this story better than mine, it seems very, very possible.