These days I now only visit the comic shop once per month.  My LCS, Austin Books and Comics, doesn't have a pull list, it has a system I actually greatly prefer to other shops at which I was a regular customer.  ABC sends out a webform each Monday evening with that Wednesday's releases.  You fill out the webform, and ABC holds the things you want for that week.  They don't have a pull list you have to set up and try to maintain through the front desk, something I never felt worked terribly well, and they over-order on all titles so it's a very rare instance when I realize I missed something and now I can't find it on the shelf.  Most shops order exactly what people pre-requested, and then maybe a couple of copies for the rack.  How the industry thinks having just a few copies for someone to discover is beyond me.

And, of course, shops that were supposed to order me things routinely did not do so, or if they under ordered, somehow it seemed I was always the one who got shafted.

This evening I made my monthly run to ABC, and walked out with a fairly serious stack of books.  I picked up:
It's a healthy stack, to be sure.  It's also a greatly decreased stack from my monthly haul two years ago.  You can see I wanted to try some things, you can see I have some loyalties to folks like Rucka and Kubert and Ennis in there, and my interest in some of the pulp stuff Dynamite is doing.

I'm an Alex Ross fan, and can't understand you people who don't care for his work.  And I love his voers for The Shadow, up to and including this latest.

I sincerely wish Dynamite would consider a print portfolio series or something from his work on The Shadow, Masks and their other licensed pulp properties.  The problem is you also have guys like Chaykin, Samnee, Francavilla and others working on covers, too, but at $3.99 a comic, I'm only buying one.  So, some softcover collection of all those covers would be greatly welcome.

You'll note that I have a few #1's here, and that's to see if I'm at all interested in a series I'll pick up later as a trade.  I used to give series up to 3 issues before deciding if I wanted to follow the new book, but anymore, I'm a 1 and done guy.  A $12 investment is just way too steep to see if I might want to follow a book.  And, frankly, I can do that with digital comics.  I just don't usually scan Comixology all that much, and maybe I could or should.  Most of my Comixology purchases are still things I know I need to go in and fetch (see: the line-up at MonkeyBrain).

I've only read a  few of the comics so far that I brought home, including that issue of The Shadow, but once again I was almost breathtaken with Morrison's editorializing, in-story, on DC's management of Superman in the pages of Action Comics. 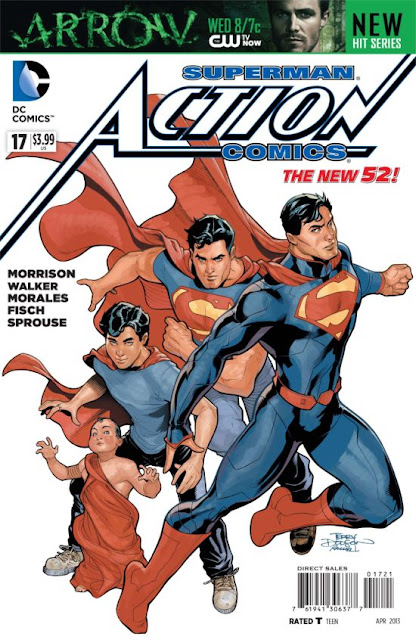 Our villain presents himself in Morrisonian declarative expository dialog, which all seems oddly at home in a Superman comic.  "Do you know what I am?" asks the monstrosity.  "An unstoppablekiller franchise from a parallel reality!  A thought that gets bigger and bigger the more you think about it!  The thought that there's a Superman better than you!" the monster blares as he blasts our Superman with eye beams, tosses him around like a rag-doll.

The New 52 version of Doomsday is:

...THE THOUGHT OF A BIGGER SUPERMAN.  A STRONGER, MORE RUTHLESS SUPERMAN!  .... POWERED BY A SINGLE CORPORATE DIRECTIVE: ANNIHILATE THE COMPETITION!

"Look at me!" says this version of Doomsday.  "Your replacement!  The Last Knight of Tomorrow!"

Between you, me and the wall, I really don't know how else to interpret this other than Morrison's commentary on Superman at DC comics these days.  It's not too hard to see the direction editorial thinks the character should go, and the management of Superman by DC broadcasting their fear that there's a better Superman out there, in some other reality, and that Superman is something that our Superman is not.  That better Superman - this mash-up of Batman and Superman, a faceless monster created and driven by corporate directive - is demolishing the idea of Superman, even as multi-handed imps reach back through time, out of sequence, out of joint, twisting and turning Superman's history to suit their needs and have their way with Superman.

It's not the first time Morrison has commented on Superman in-story (see: Action Comics #9), and depending on how DC's current regime likes all this, it may be the last as we've only got one more Morrison issue to go.

Morrison has said these are all the ideas he had for Superman, but one has to wonder if he's moving on and might not be back when the environment is better for a Superman that he clearly believes in that the current regime at DC is doing everything in its power to wipe off the map.

I do think its worth noting:  As much as I'm enjoying monthly installments of Morrison's Action run, this storyline was written for the collected edition, just as much as Batman, Inc. and his run on Batman, in general.  I'm actually okay with that.  He's not alone.  I've more or less quit reading Rucka and Waid except in trade collections.  I'm still picking up Action monthly mostly out of habit, but it's increasingly difficult to find a reason to warrant the purchase of paper monthly comics.

It's not that I think DC should make it policy to print whatever criticism artists and creators feel like tossing at management right in their stories, but it does highlight what's possible in a superhero comic when it's not just writers reacting to editorial bullet points and directives.  At the Big 2, there are maybe four or five writers given that freedom.  It does seem The Big 2 gave up on the idea that their comics could mature with their audiences (see: the gutting of Vertigo), and exploring new ideas and allowing for exploration is far from the order of the day.

Superman works particularly well for allegorical stories, and you see creators trying that out, be it James Casey, Morrison or even JMS (obviously there are varying degrees of success).  With Morrison shuttering his run on Action, however, it's going to be a while before we can see anything like it in the pages of Superman.
Posted by The League at 2/23/2013 01:29:00 PM

Timely post, as I spent this rainy afternoon in front of the wood stove, hounds by my side, reading my monthly haul.

We had quite a few overlaps. I loved the ending of Happy, and am not sure why I don't like Ennis' Fury more than I do. I'm always psyched by Parlov's art, but this CIA-dirty-deeds-behind the scenes stuff just isn't hitting for me. I did get the first ish of Red Team, which I liked a bunch.

I also recommend the new Defenders. The hook is that Valkyrie is assembling a team of "Shield-Maidens" so its a nice vehicle for an under-used character.

I haven't been to the comic book store in months. Not a thing a I want to pay money for. How is the Punisher trade? Per your recommendation, I got the first Rucka trade a while back. Really liked it. Haven't made it to the second. Might be the best take on Punisher I've ever seen. Wasn't a fan of the Tarantino-style Ennis stuff.

Ever read Punisher/Batman: Deadly Nights? One of my all time favorite one shots. The only Marvel/DC crossover that worked for me. Chuck Dixon nails both characters.

@Fantomenos - I read the first couple issues of the Fury book, then decided to pick it up in trades. I'm okay with the back-room CIA stuff. I think the other Valkyrie book I picked up I thought was going to be whatever this Defenders is you're describing. I'll take a look at Comixology.

@Jake - If you liked the first trade, trades 2 and 3 are a continuation. It's kind of a fresh look at Castle through another set of eyes, and it's really pretty fascinating. Makes the decision to end the series and make Punisher Elektra's boyfriend seem absolutely crazy, like nobody at Marvel was even looking at Rucka's book.

I like Ennis a lot, but I never read much of his Punisher. I don't even really remember if I planned to move to trades or what happened, but I had heard he made a switch a year or so in and the book took on a lot of gravity, which I've always found an interesting proposition.

Beware that half of the 2nd Punisher trade is a DD, Punisher, Spidey cross-over, and it helps to be reading DD right now (which I also read in trades). It's all in continuity and works, but the story solidifies a lot in the 3rd trade.

If Action 17 is anywhere near as good as 9 I'll have to pick it up. I still can't believe 9 got by their editors.

It's not a complete story with a fine point on it the way Action #9 is, but I very much look forward to going back and reading the trade and entire run to see what I missed as Morrison built to his point.