I've said before that I felt part of my enthusiasm for superhero comics was that it felt that the DC Universe and Marvel U's were working toward something in the wake of the 1980's quantum leap in talent, storytelling and risk taking.  I started writing about comics because I felt the narratives were rich enough to explore and share - a strong enough stone that I could sharpen my own writing by writing about what was out there.

I do think geekdom has changed.  The idea of challenging readers seems to just anger the current crop of folks who make up the audience.  Package it.  Repackage it.  Let me buy the t-shirt and/or CosPlay, and understand from a tumblr site that old comics are weeeeird.  It's intended to be fun and disposable and read on a phone and the universe will provide more whenever I want it.

It's a way to approach the fandom, but when charges of fake geeks - guy or girls - get dropped - I think this is at the heart of the argument.  Fandom, that geek-cred, was an earned credit of money and time spent, "knowledge" gained through work and effort.  I don't even know what I'm looking at when I'm online and stumble across someone talking about how their fan-fic is the way they see the characters - and that's their version.  I used to use the word "entitled" so much, I excised it from my vocabulary, but I'm otherwise at a loss for a word.

I can't say I'm interested in a comic about yet another twist on an idea - no more Superman knock-offs unless you're Mark Waid or Alan Moore.  No more zombies.  No more apes - with a funny hat or whatever your take.  No more writers believing that mashing up internet memes and cute things is adorable.

There's a 3 day "Brony" conference coming to Austin this fall.  3 days.  Of My Little Pony.  I know, I know... I can't throw stones, but...  running a conference is hard work.  It's exhausting.  My professional conference, with guest speakers, panels, workshops, etc.. was only, really, about two days.  And we're talking about preserving the scholarly and research record of western civilization.

I can't begin to fathom what 3 days of Brony fandom even looks like...

As much as I surround myself with my trophies and collections here in this... fortress of solitude...  I am still seeking the path for how or if I will continue to engage in what's been a lifelong hobby and, sure, passion.  I like a challenge.  I want to take that on myself, but I also want for genre comics to come back at me and show me what they've got.

By virtue of comics blogging, I cannot help but feel I am part of the problem.  Or would be, if my readership crested 40 on a given comics post.

When I project what a post Man of Steel world looks like, if the movie is successful, there are two likely tracks for how the character will be re-absorbed into the zeitgeist - and it's up to the producers to make sure it's not in the mold of how the Punisher and Venom have been embraced as these weird totschkes of low-brow bad-assery.  I'd like to hope we'll do one better, even as Superman and the "S" are used to move candy bars and whatever else WB can slap the images on. 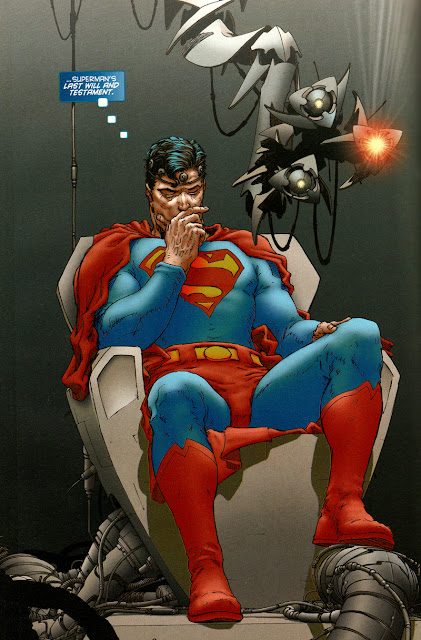 *I look forward to the first Mad Men Con.  It'll be all dressing natty, being horrible to each other, drinking and avoiding the riding lawn mower.
Posted by The League at 5/13/2013 11:26:00 PM