And, of course, they have an active social media community that gets them to retry the same myths with different experimental methods or parameters, so you can revisit some myths multiple times, depending on viewer reaction.

For a show that's been on for ten years, not often do I feel like they're going through the motions or that I'm getting bored with the format or formula.  I assume the hosts don't want to get bored, so it often feels like their own dissatisfaction is what drives change and tinkering for improvements.

It has been fascinating to watch the show change, as they initially truly explored urban myths and - briefly - had a professor of urban folklore as a regular explaining why the myths resonated.  Originally it was just Jamie and Adam, then Tory, Kari and Scottie.  Scottie left and we got Grant Imahara, who is a guy I would want to drink with in a heartbeat.  Well, I'd buy any of these guys a drink.  We also had a Myth-tern for a year.  When Kari left on maternity leave, there was briefly this pretty engaging woman on (Jessi Combs), but she disappeared as quickly as she appeared.  Nobody else could fill Kari's welding mask, I guess.

And, of course, you can't discount "Buster", the crash test dummy or the many, many heads they've made out of ballistics jelly (of all the creative uses of dead hogs). 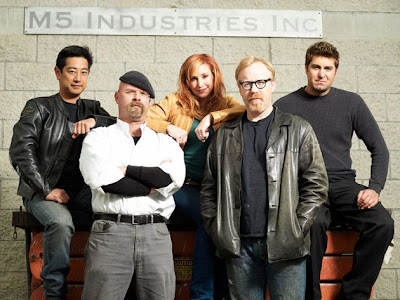 I assume I don't have to sell you on Mythbusters.  It's had ten years and innumerable episodes for you to buy in or not buy in.  There have been knock-offs and other 'build" shows, but none have really found the same charm or nuts and bolts approach.  Many have fallen into the trap of casting cheesy hosts or just failing to connect.  Often, the failure seemed to come from the fact that the set up of the program felt gimmicky, and got in the way of just exploring an idea or concept.  I don't need time limits or eliminations to make a show interesting, Big Brain Theory.  Or even competition.  Just let the science people do sciencey stuff.

This season, the show's 10th, started as the first episode did, back when I was living in Arizona.  They tested the "rocket on an Impala" myth and took it mostly to fruition (I have a few quibbles, but we'll see what they do for the fifteenth anniversary).  The few bits they did show for what's coming this season looked predictably awesome.

Here's to as much Mythbusters as the team wants to produce, and for being one of the most genuinely fun shows on television.

I still want to see them build another Batmobile for more Batman experiments.


*it is not myth, but fact, that if you leave a can of soda in your car on a hot enough summer day, the can will explode and spray Coca-Cola all over the inside of your Mitsubishi Eclipse, getting residue on a tape, which you will not notice until after you've placed it in the tape deck, thereby ruining the factory stereo in your car.

Mythbusters claimed that this couldn't happen after putting a soda in a convection oven for a bit.  No, I don't know why they obtained different results.  But my incident wasn't a fluke.  My college pal, Richard, also destroyed his grandma's Towncar by leaving a whole six pack in the car.  Man, was he in trouble.
Posted by The League at 5/02/2013 10:07:00 PM