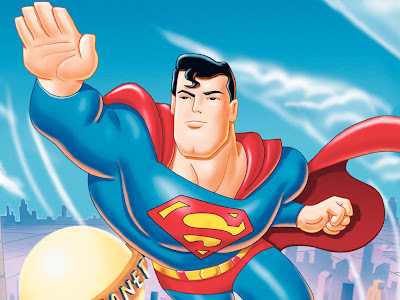 The creators didn't tie themselves to any one version of Superman from movies, TV or the comics, and instead built their own Superman.  Some parts were decidedly pre-Crisis, some post.  Some influenced by the movies, most by a wide sampling of comics from the late 60's to modern touches as of 1996.  The influence from the show was immediately felt in the comics, reflecting the super-city look of Metropolis, a bit more of the city-girl bite to Lois (based on her first appearances in comics, cartoons and radio).  And it's difficult to underestimate the effect Clancy Brown and the WB animators had on the personification of Lex Luthor in the comics.  After the pudgy Lex of the 80's and the red-maned Lex of the 90's, this was the Lex of the next fifteen years.  And, the series introduced the idea that Brainiac originated on Krypton rather than Colu (although this Brainiac is pure computer and does not shrink cities). 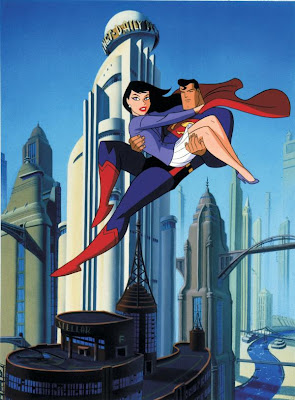 Between this show and Mark Waid and Alex Ross's Kingdom Come, I finally had my "in" to Superman.  DC would take a little longer to crop the super-mullet (they'd really invested in it, and it'd be after 2002 that all the licensed mullet-imagery would finally disappear).

The art in the series isn't as good as what we'd eventually get in Justice League or even the Batman/ Superman Adventures (a show with a theme song of nearly unparalleled bad-assery).    The show has come clunkiness to it in the first season, including the 3rd act of the 3 part pilot "Last Son of Krypton".  But it's a show that's never awkward or embarrassed about who Superman is, and that fundamental understanding carried this show for 3 seasons and through however many seasons of Justice League and Justice League Unlimited.

Of course, Bruce Timm's influence in art, style and substance is all over this cartoon, and his deft ability to create a truly all-ages show, one that kids could watch with no problem but that adults would find engaging in 30 minute chunks, is now practically a lost art on American TV screens.  And especially impressive when you consider it was running alongside the uber-popular junkfood TV of Power Rangers and similar programming.

Superman: The Animated Series managed to do what Superman comics have done since the 50's, continually expanding and layering the world around Superman, thanks to the possibilities of the character.  While Batman: The Animated Series excelled in so many ways, it remained almost forever static, with some of the biggest character leaps of the series occurring off-screen, including Robin's transformation to Nightwing, the adoption of Tim Drake, and more.  Batman's biggest character moment probably actually occurs in the first scene of the series Batman Beyond, which is telling.

This show grew Superman in power, his relationship with Lois, his Kryptonian past, his discovery of Supergirl, his feud with Darkseid, and more.  Sure, the program is episodic, but it always felt like the writers were going somewhere, and they did, finishing Justice League with plot threads from this series.

The origin story here is broken into the three parts of "Last Son of Krypton", following the usual triptych of  Krypton/ Kansas/ Metropolis.  We get a high-adventure Jor-El, a confused young Clark in Kansas learning his history and, of course, Clark's introduction to the Daily Planet and his rivalry with Lex Luthor.  All good stuff.

I also watched the two-parter, "Blasts from the Past", in part because I think the story will be reflected in the upcoming movie, Man of Steel.  The cartoon sticks to the Bronze-Age preference for Kryptonian Phantom Zone nemesis Jax-Ur (voiced by Ron Perlman) rather than Zod, and rather than either Faora or Ursa, gives us a third option in Mala (voiced by Leslie Easterbrook who dudes who watched Police Academy movies will remember as Lt. Debbie Callahan**).

I doubt the movie is lifted wholesale from the series, but it'll be interesting to compare.

Anyway, if you've barely checked out the series, I think it's on iTunes and you can get the discs from Netflix.   The show did a great job if introducing the larger world of the DCU into the cartoon universe, with episodes including folks like Aquaman and The Flash.  It also has some terrific voice talent, from Dana Delaney as Lois to Gilbert Godfried pitch-perfect as Mr. Mxyzptlk.  You can't really go wrong.

*I don't want to undersell the effect the mullet had on me in 1992.  By 1992, any association the mullet had once had with Mel Gibson and Lethal Weapon was faded and the hair style was now relegated to really awful bands and some really cheesy dudes in the Houston area.  By 1993, when I arrived at college and DC was invested in the look, they should have been looking to the Vertigo line for what was considered edgy or cool.  The characters in Shade and Invisibles reflected the culture of 1993-95 in a way the superhero comics couldn't begin to touch.  Clark Kent in a ponytail actually looked way, way more out of style at that point than Clark in his traditional, conservative look.  By 1997, even Metallica had all cut their hair off.

Everything about that era and look did nothing but signal to me that Superman was being handled by people with tastes just behind the times enough that Superman didn't feel old, the creative team felt like old nerds workshopping what they thought maybe kids liked, but were off by about 6-7 years - and it all felt so faddish, but like cheering on Right Said Fred in 1998 (actually, bad example.  Right Said Fred is timeless).

Really, ANY change like that for Superman should be considered grounds for dismissal.