SW Watches: Most of "Major League"

Somehow this movie gets circulated a lot.  I guess there aren't that many successful baseball comedies as the only two other baseball comedies I can think of that aren't Major League, Major League II or A League of Their Own are the Bernie Mac movie Mr. 3000 (that I'm not sure anyone has ever actually seen), and the Tom Selleck flick, Mr. Baseball, which no one really remembers. 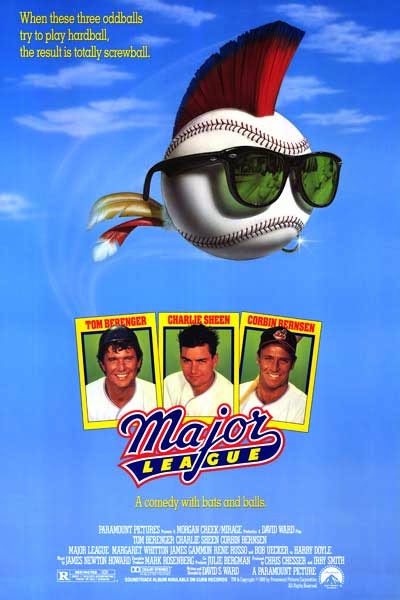 I'm just not sure this is a very good movie.  maybe it is.  I can't tell.  It's certainly something people have seen and quote infinitely ("just a bit outside...").  It has good bits, and it does have Rene Russo in a thankless girlfriend role to a mulleted Tom Berenger, so at least she's in it.  It does have an early career Wesley Snipes, Charlie Sheen and Dennis Haysbert as well as an established Berenger and Corbin Bernsen.  And, of course, baseball's Bob Ueker and the gravel-voiced James Gammon.


It also features all the reasons the culture around the Cleveland Indians was and is problematic as anglos wear headdresses, beat toms in the stands and refer to the field as "The Happy Hunting Ground" and their mascot "Chief Wahoo".  Throw in that the villain of the plot is a former showgirl who has a photo that is slowly disrobed as a reward for each victory, and the whole thing is a Rorschach test for the sports-macho-'Merica! attitude I'm not sure we examined too well until recent history.


I do recall seeing this in the theater, and people cheered like maniacs.  The movie works as well as an actual good baseball game in that regard - even if you kind of know these guys are going to win.  It does understand the drama and marathon approach to baseball with over 160 games per season.  And it does have some really funny bits.

I did see Major League II once back when they were doing free screenings at UT for upcoming movies (I never knew what that was about), but never saw it again.  Apparently there's also a third part to the trilogy called "Back to the Minors" of which I have no recollection, but it's keeping Berenger off the streets, I guess.

I love this movie. What does that say about me?

You like Tom Berenger beyond the point of reason.