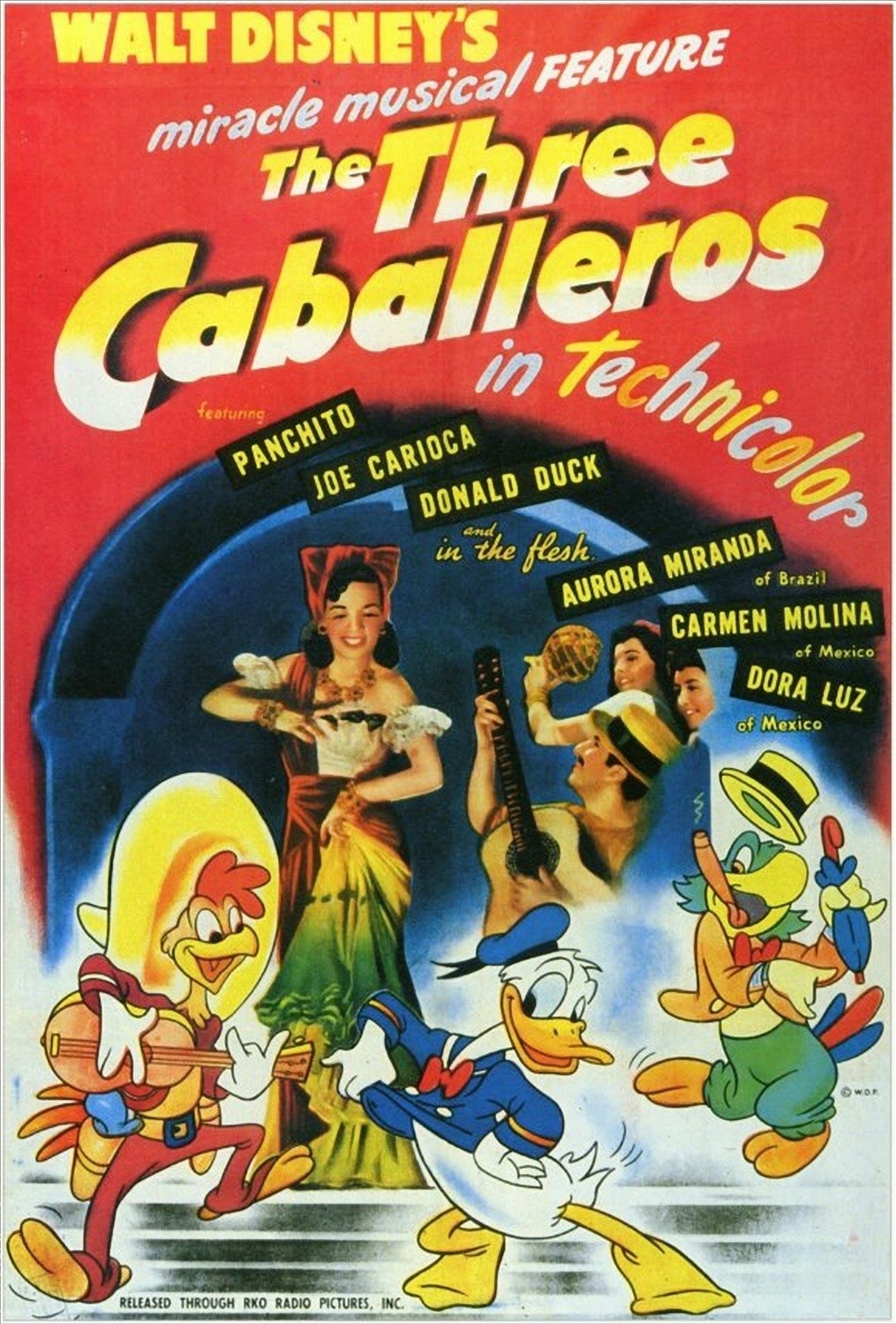 
It's probably very important to contextualize the movie.  In the 1940's, we were, of course, at war.  Disney had turned a lot of the studio's output to wartime efforts from training to propaganda.  The US government decided we needed a good neighbor program with our neighbors to the South of the Rio Grande down to Antarctica and sent Disney and his pals on a Latin American voyage to (a) create a movie that would enable Latin America to see itself reflected in the Euro and Anglo-centric Disney film and (b) likely to try and train up white Americans to try and be way less racist, maybe, by sharing some highlights of the cultures of, as it turns out, Brazil and Mexico.


The movie is just super weird.  It's not a straight narrative.  It's a collection of short films crammed together with the, frankly, half-baked concept of Donald opening birthday presents.  One present is a faux-documentary about a penguin bailing on Antarctica because it's too cold and he wants to live on the equator.  It's in a traditional animation style, cute and forgettable.  Then a plotless short about birds that doesn't go anywhere except to introduce a character who kind of appears sporadically as an agent of chaos for some reason.  And then there's a short about a boy who finds a flying donkey that, frankly, doesn't make any sense.  And then we get into the sections about Brazil and Mexico.

1.  Both are basically more like pitches for tourism than anything else.  It's not really there to sell you so much on the actual culture as to say "look at the partying you can do in Brazil and/ or Mexico!"  There's no real sale of the actual Mexican or Brazilian people and why we should all be allies, except...
2.  It really wants to sell you on Latinas.  Or, at least the promise of Sexy Time in Latin America.  I really don't know who this movie is really aimed at, but it certainly seems that whatever was going on with Walt and Co. on their excursion must have absolutely convinced them that Brazilian and Mexican ladies were where it's at and WASPy America is doing it wrong.  I mean, far be it from me to argue (I'm not made of stone), but there's no small amount of the movie that is not spent with Donald - our representative of what I'd assume to be the 1940's anglo-everyman from Disney's perspective - chasing around after Carmen Miranda's sister (quite literally) and then an entire beach full of girls in Acapulco.


Note the cartoon "boinging" sound at the 29 second mark.

I mean, if you're shipping this overseas to a bunch of guys who are still mooning over their ratty, taped-up picture of Betty Grable they arrived with, well, sure.  Whatever gets them out of the foxhole.  But I imagine if your husband is serving overseas and you just brought the kids out to the pictures for an evening away from the munitions factory and tending the Victory Garden, this had to have been a somewhat baffling experience, allowing even for the slapsticky reactions to pretty women that are a standard part of cartoons.

This is a beautifully designed movie.  It's not quite the technical achievement of Fantasia, but if you've ever seen the design work behind the scenes as Disney makes its movies - all the colorfully crafted concept art that seems to become a little pat as the patented Disney look takes over by the time the thing shoots - it's like they stuck with that developmental look and brought it to life for the second half of the movie.  It starts off gorgeous and just gets absolutely bonkers by the end.  I mean, really super weird stuff they were clearly just trying just to try.

But, man, if it's not a beautiful movie.


There's some terrific blending of animation and live action that would be perfected by Mary Poppins that is key to the pop-up book scenes in Brazil (it's taking all my strength not to spell in Brasil, like some obnoxious undergrad trying to prove a point), and integrating Donald into several scenes in Mexico - where he acts like Silvio Berlusconi on a bender for about twenty minutes.

It's a kinetic, colorful experience free from the constraints of straightforward narrative and extremely playful in its presentation, basically throwing out any semblance of trying to please anyone but the creators themselves.  I'd say "who knew Mexico could be so trippy?" but then I expect anyone wearing a t-shirt that says "I ate the worm" and also woke up in a hotel they can't recall checking into would raise their hand.

Seriously weird visuals fill the screen from abstractions, to blending of animation and live action of two characters fighting over Carmen Miranda's sister who turn into fighting fowl, to floating heads of women taunting a sweaty, clammy Donald, to integration of just some Latina legs as somehow the movie devolves into what could really be seen as a Freudian nightmare of Donald's confused sexuality.  Not the intention, certainly, but, boy-howdy.

For the Disney fan, it's an absolute must-see, but it's absolutely no surprise the movie has been relegated to a novelty or curiosity, an artifact of the era, something Disney seems keenly aware of without bearing the same mark of shame that Song of the South carries with it.   It's just easier not to push it on the public while still giving fans a chance to check it out.

*yes, of course I hated it at some point, but on spin #434 of the disc, at some point you get over getting tired of the music and come back full circle to liking it again