I realized I hadn't been posting a whole lot, at least not about movies.  But I've also been watching a metric @#$%-ton of TV lately.

Like a lot of you, I heard the Tina Fey produced Unbreakable Kimmy Schmidt was pretty good, and at 22 minutes per episode, only 13 episodes and that each one was like eating a box of Hot Tamales or Mike & Ike's, it was the first series I've binge-watched since I was home with the flu and watched 2 seasons of Archer. 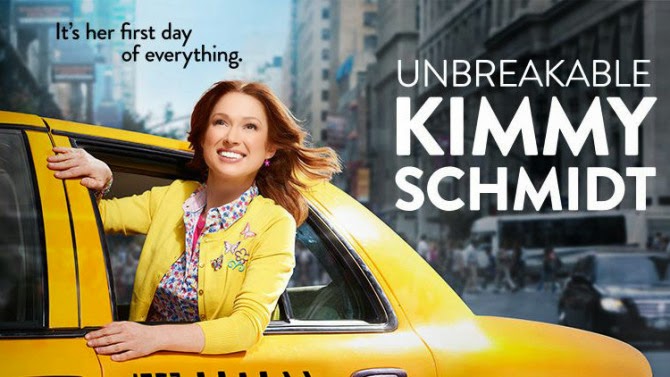 A concept that, no doubt, HBO would have insisted been a brooding melodrama with plenty of sexual dysfunction and nihilism, this take on "what happens when a girl is kidnapped at 14 and doesn't leave her bunker cult layer until she's 29ish?" is, instead, super upbeat, life-affirming and a hell of a lot of fun to watch.  The brand of humor feels akin to the dizzy chaos of early 30 Rock, and even if we only ever get these 13 episodes, they were pretty damn enjoyable.  But, yeah, I guess there's a second season guaranteed by Netflix (where the show is living), so I'm down with that.

Anyway, it's not often I watch 13 episodes of something so fast I don't even mention it between start and finish, but there you are.

And before we move on:


I'm only 3 episodes into Marvel's Netflix-only Daredevil, and I'm totally in.

Look, we need to talk more and in depth about Daredevil when I get further into the show, but I was a Miller and Bendis Daredevil fan, and as such, I cannot believe my eyeballs seeing how - kind of like the Cap movies, this show has distilled the character and pacing of those two creator's runs and found a way to bring it alive in a way that, upon reflection regarding the source material, I don't think you could ever do as a 2 hour movie.  Daredevil always played for me as a slow burn, low and quiet with loud punctuations when it came to the action (and in Bendis' run, it could be months between fight scenes). 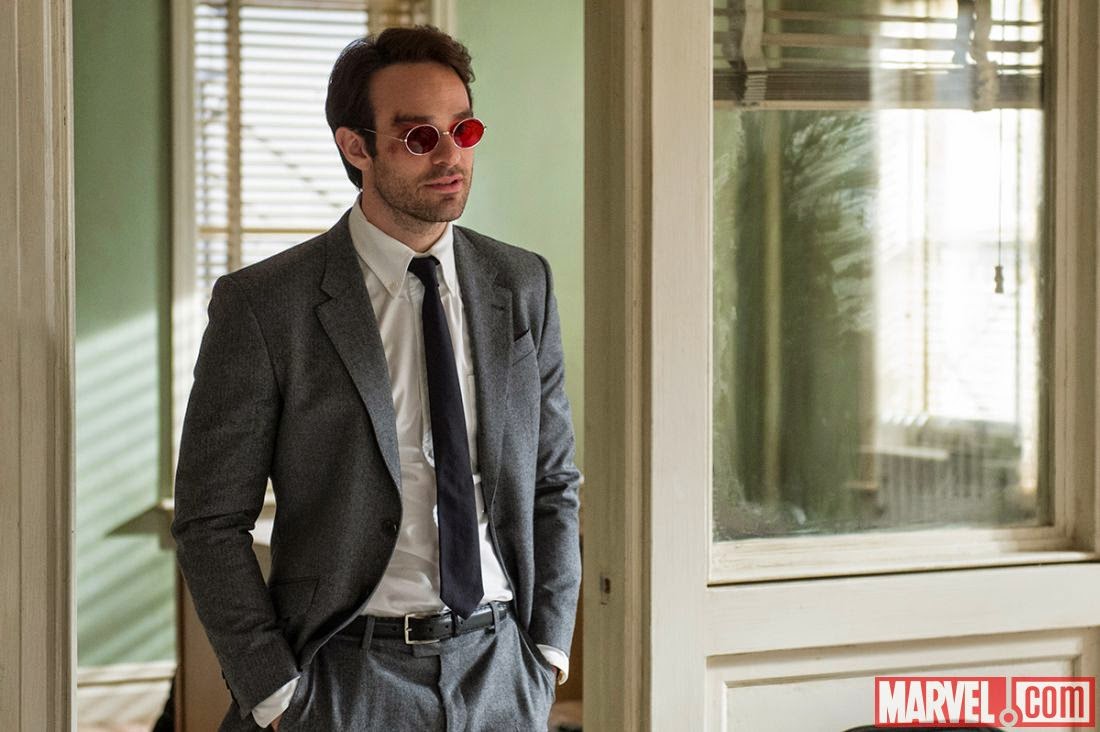 Maybe the spiritual counterpoint to Kimmy Schmidt (hey, Matt and Kimmy are both New Yorkers!  That'd be an awesome crossover!), this show is also quite different from Iron Man, Cap or any of the other shared Marvel Cinematic U material in tone, pacing and approach, and it's that diversity that's been inherent in the comics since the 1960's that's finally making it to the cinema and TV.  The niches us comics nerds have long been aware of are showing up enough that - hey, not everyone will like this show, just like not everyone liked the comics.

I don't want to beat a dead horse, but the Affleck movie from a while back (not something I blame on him) was so early in the new superhero film era that it fell back on bad habits, trying to make Daredevil fit into the superhero mold of other superhero movies in a way that wasn't going to work very well.  It's nice to have some redemption for a character and comics I do like, and to see it doing so well on a second chance.

And, if you don't want to get spoiled, don't watch this (from episode 2), but it is Daredevil as all living hell, and I predict everyone ripping this one off for a while.


Of course, Jamie also got me those Batman episodes, and while I haven't watched any since Sunday - I foresee no shortage of Bat-viewing in the months ahead.  It's really astounding how much that show was fully realized right out of the gate.  The pilot was fortunate to get Frank Gorshin as The Riddler, certainly (he's my favorite of the Batman '66 Villains), but the oddball humor of the series is pretty much right there in the first few scenes, and the show is so much darn fun.

The Americans is about to wrap it up for another year, and, holy hell.  Yeah, we'll talk more about The Americans after this season wraps.

Mad Men picked up the pace a bit with only four episodes to go, and I'm very much on board with how this is going.  This feels neither pre-destined to the point of absurdity (see: Lost), nor is it going to give a cop-out ending.  The same deliberate characterization and work that's gone on for the rest of the series still feels very much intact.  No wish fulfillment for our characters here.

I was totally jazzed to see Brandon Routh, the guy who played Superman in 2006's Superman Returns, show up as The Atom on The Flash.  I don't know quite how they'll get him from Iron Man knock-off to Tiny Titan status, but he has a chance to do something interesting with the character of Ray Palmer.  I just hope the writers of the Flash/ Arrow universe use both Routh and the character wisely.  I don't think The Atom is a terribly good fit for The Arrow, where he's currently a supporting character, but I hear he may be a featured player on the planned team-up series, Brave and the Bold, probably coming to CW in September.   And, hey, surely CW and DC learned something from the success of The Flash - you don't need a brooding, tortured character to get someone to watch a superhero show, it turns out.

Anyway, that's what I've been up to.

I'm pretty picky (ha!) with my TV time, so I'm avoiding Kimmy Schmidt, but Daredevil will make me hop back on Netflix. I'm pumped you liked it, and I've read several good things on Slate. I *need* to watch it but should probably wait until I finish grading and editing this weekend. Ugh.

And Flash! I will make time to watch tonight. Can't wait.

If you can make time for a Nicholas Sparks movie, you can try the pilot for Kimmy Schmidt. :)

I did the exact same thing with Kimmy Schmidt. I watched the first episode one night with friends and then when they left I mainlined the rest of it over the next 36 hours straight into my brain. It is completely mental and I love it.

I've also watched the full run of Daredevil and I loved it. The hallway scene was pretty amazing and it reminded me in a good way of that True Detective scene that everyone was raving about last year. What I really like about DD is for the most part there are practical effects and the fights are as real as they can be on TV. The longer the fight goes the more tired these guys get and the sloppier they are, great attention to detail. Overall the story line was pretty great and I love how they were dropping Easter eggs that will pay off in Iron Fist. Very pumped up by this MCU TV on Netflix.