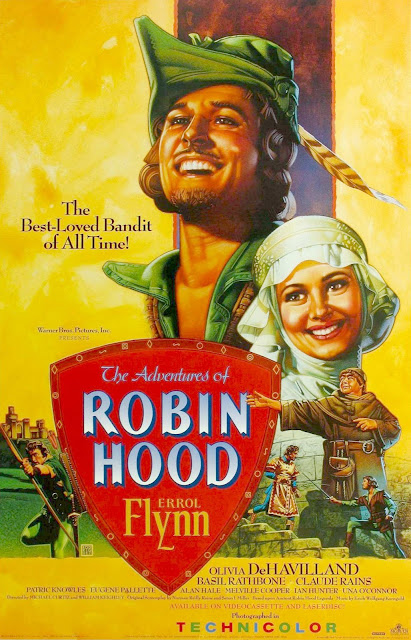 
If you've never seen it, there's just such a raw joy to this movie that's hard to convey.  Maybe it's the bold exploitation of the possibilities of Technicolor, but it's a movie with heroes who make each other laugh, who laugh at danger, laugh as they enter in sword fights, laugh as they take ne'er-do-well knights hostage, etc...  And all with terrific stunts, sword play, archery tricks, big scale battle-scenes and grown men in tights climbing trees.  It may not have the "move so fast the audience won't have time to keep up" pacing to it you might get in a modern actioner, but it moves along at a brisk clip.  And, of course, the dialog is amazing.


The impact of the movie is absolutely undeniable, especially if you want to get an idea where all those capes and tights came from in the superhero boom of 1939 and 1940.  Errol Flynn is the embodiment of the cool, dry witted action hero with a charming recklessness that I think modern action films could learn from, and from which movies of an earlier era borrowed before every action hero had to become Bronson or Eastwood.

It's also a movie that drives home the point of Robin Hood.  He could have safely remained a rich noble and let the injustice around him occur, but he took action when the people around him were threatened, both Saxon and Norman, and bore no ill will toward the Normans in particular, just injustice.  What looks like factional fighting is, in fact, a power grab and one that will lead to the ruin of all the common people, and it's a point well taken.  There's always a Prince John who benefits.

This is one of my favourite films. It's one of those films that when I see it on TV I just stop and watch it until it is over. Ack, I gotta go watch this again now.

Recorded this off Turner Classic this week. Jamie will do anything not to watch any noir films, and that's what else was on the DVR, so I got to give it a whirl.

I've been itching to see this film for years, but this tears it. I have to see it now. Also, I think you should write a post on how bad the Costner version is. Every time I come across it on TV, I cringe. And no matter where in the movie I land, there's a cringe-worthy moment no more than five minutes away. Usually it's Costner's hair, followed by his on and off again kinda-sorta accent.

from the bits I've caught on cable over the years, I think it best I not return to Costner's version, but I'd like to see the Ridley Scott one some time.

The only reason to watch the Costner version is to see Alan Rickman eat up the screen. Damn fine actor.

If you love the Errol Flynn version, you will hate the Ridley Scott version. It's so full of self-loathing, for the source material and for the historical period, there is not an ounce of fun or joy to be found. It's awful. As lame as the Costner version is, at least the filmmakers were sympathetic to the idea of the character and his world. As I watched it, I couldn't help but think, "why did they bother?"

Fair enough. It hadn't had good reviews from what I recall. It did have some weird back story about how it had been a brilliant script about the Sheriff of Nottingham, but got turned into whatever that movie was.