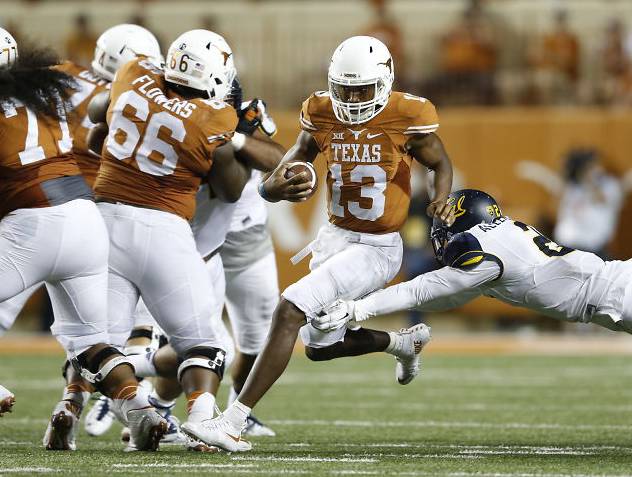 The defense had that aforementioned rough third quarter where, I suppose, the Cal offense had adjusted to them, and in the 4th quarter, they adjusted right back, stopping the runaway train.  We kept defensive penalties to a minimum (I haven't seen any stats yet, but that's my recollection), and while 45 points gave Cal that one extra point they needed to win the game and was thusly at least one touchdown too many for us to feel good about the job done on the field, nonetheless, I think they have something to build on.  Like this Vaccarro sibling.  I saw he had 7 solo tackles and a total of 9.  How can you not like that?

It's not all Jerrod Heard.  More than one Foreman had a great game, Burt was doing okay, Johnson, the other guy.  But, Jerrod Heard was out there incidentally breaking school records, shaking off criminally performed facemask penalties, racking up an ungodly amount of rushing yards, and demonstrating both superhuman ability to make quick decisions as well as put all that into action with his feet.  And without much in the way of turnovers (as we say at my house when a player is suddenly going for a great but dangerous run "BALL SAFETY!!!  BALL SAFETY!!!").

It is true that we could have tied it up and gone into overtime had we scored the extra point.  But I played sports long enough to know that if you lose a game because of one point as the clock runs out, you're not blaming one guy.  It takes a team effort for you to put your kicker in that position.

It's no secret at my house that I'm not a huge Nick Rose fan, and whether that's because I hate his moronic profile pic from both this year and last year, or because my general impression is that he can't handle pressure well - a theory I think gained a little traction tonight, I don't really care.  I feel genuinely bad for the guy, because he's going to blame himself, and that's going to impact his game one of two ways, and we'll have to see which way that is.  We all have people we dislike irrationally, and for more than a year, I've already had it in for this poor kid.  Tonight did him no favors in my book.

But this game, despite the L that it will be in the annals of sport still felt like a win.  Even when we were down by a touchdown, the fans in the stands were acting like we were blowing out Cal for a reason.  This was the UT team we wanted to see, and one we haven't seen play like this in a while.  No way do I want to see us lose every other game this season, but I believe in these particular players and coaches, and somehow it feels like a turning point.

Starting watching these guys.  Maybe this season won't be full of wins, but this is the start of something.

Hope this was a sign of things to come. Heard looked good, and you're right to give credit to a seemingly much improved offensive line. I also hope this isn't just a sign that Cal is actually a much weaker team than we initially thought. At any rate, the offense was completing passes and making plays in a very convincing way. Very fun to watch.

Yeah, I truly believe we saw the start of a sea change at UT. It may not be impressive this year, score-wise, but this should be the start of the real Charlie Strong era. keep in mind, Mack Brown did not turn UT around in a single season. It took a while. So I hope we're all willing to give Coach Strong and Jerrod some latitude to build on this week's performance.

That was rough. Credit to UT, though. Cal can sling it around. I thought they might run away with it. Heard did a helluva job gettin' up after having his head damn near ripped off.