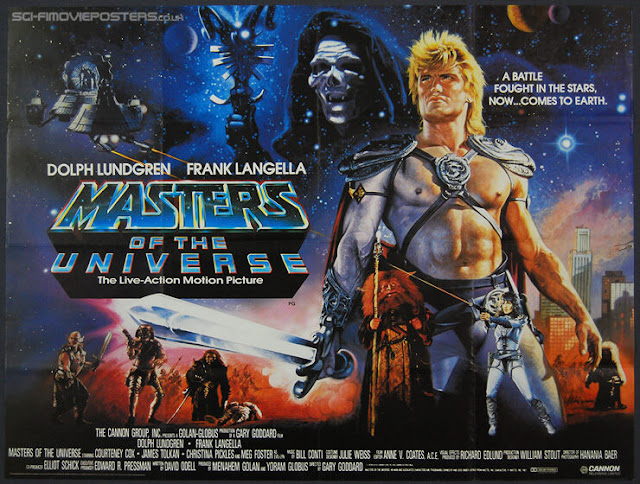 I haven't seen this movie since the mid-80's when it came to VHS or cable.  I can't remember which.  All I do recall is that they got cheap and filmed most of it in modern-day 1980's America rather than on Eternia.  Also, they wrapped up Courtney Cox into the proceedings, back when her claim to fame was being the girl in that one Bruce Springsteen video.

Mostly what I remember is that the femme fatale from They Live is also in it as Evil Lyn, looking way better than Teela.

If you've trapped at home and need something to do, and have the same sort of half-assed memories of He-Man that I harbor, we'll be plodding along.

Full disclosure:  While I watched the cartoon, I am not much of a fan of He-Man, the Masters of the Universe concept or whatever they put in the movie in place of Orko, who I also hated, but this guy was worse.  So, not a lot of scared cows for us on this viewing.  So, heads up.

Great timing as "How Did This Get Made" just did an episode on "Masters of the Universe" so you should take a listen after you see the movie.

I'll get the link ready to share with folks. OR, you can hop on and start dropping factoids like you learned from the podcast, as if you're a wiz at MoU trivia.

Haven't listened to it yet but it's in my queue.

That SlashFilm article linked from the "How Did This Get Made" site the is pretty cool.

Quotes from William Stout on the production I'd never heard/read before.

I've convinced Emily to join us. She'll be with us until we fall asleep.