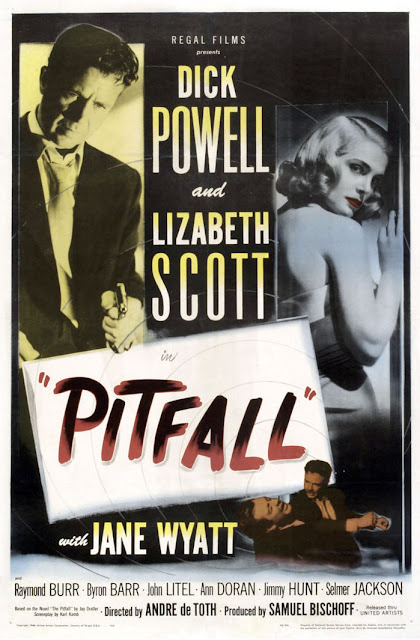 
It's also another noir film where we learn that Insurance is a dangerous and sexy business.  Powell plays an insurance man who has hired Burr as an investigator on a case where he's looking to recover $4000 in fraud.  But Powell is maybe a little dissatisfied with his home life.  He's got a good-looking post-war wife in Jane Wyatt, a swell kid, a steady job and a schedule that's suffocating him.  He wants to remember the man he wanted to be.

Powell gets a tip from Burr that the fraudster, Smiley, had a girl and he bought her a lot of expensive gifts.  Powell gets down to her place to learn she's the fun-lovin', good-lookin', day-drinkin' Lizabeth Scott.  Fast forward a bit, and they're knocking boots.  This irritates Burr who wants a shot at her, and he begins harassing first Powell and then getting Smiley riled up that someone is making time with his girl while he's on the inside.

The movie is, in it's way, a paean to domestic life in America in the post-War era and stands as a cautionary tale to bored husbands who might be thinking about playing grab-ass with someone other than The Missus now that they're home and settling into a routine that's maybe a little dull, if we're all being honest with ourselves.  At the darker edge, it's a recognition of the resentment felt by anyone in any era who feels that maybe the perfect, cookie-cutter life they've been sold on isn't as exciting as it could be, and is maybe there to scare them off by seeing what can happen when they step outside the safe bounds of home and hearth.

And even as the movie sets up Lizabeth Scott in a purely sympathetic role - surprisingly so, really - everyone in the movie gets taken down, even Powell's wife who has, apparently been reading and absorbing some Dan Savage columns.

This one won't go down as a favorite, but Powell runs the gamut of character states, and it's pretty great to watch him work the part.  And I'll just say, I think a lot of classic movie buffs dig him, and deservedly so.  He'll never get the same recognition of a Bogart, but he's up with Robert Ryan in my book.  Just a guy who could turn in a great performance when you gave him half a chance.

I'm not quite as keen on Lizabeth Scott as many straight-up noir aficionados.  I get that she's pretty good, but she never hits me over the head the way a Bacall, Grahame, Totter or Marie Windsor manage to do.  Which is weird.  I have no real reason why.  She always seems a little distant in her roles, or something.

This movie is no Double Indemnity, but it's still half-way decent and isn't a mess when it comes to the narrative.  Oh, and fun fact!  The movie was directed by Andre de Toth who did House of Wax!  So, there you go.