Gene Wilder Merges With The Infinite 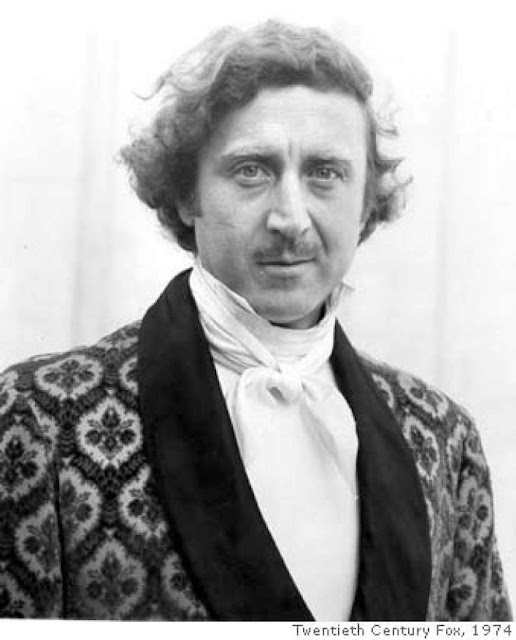 Gene Wilder has merged with The Infinite.

Included in everyone's list of favorite movies, you'll find Blazing Saddles and Young Frankenstein.  Like you, I watch both with alarming frequency, just dropping in for 30-45 minutes or more when I see them on cable.  We watch Young Frankenstein a day or so before Halloween every year as a break from actual horror movies.

There really wasn't anyone who was like him before and there certainly isn't anyone like him now.  Who else brings such a thoughtful, skilled, deftly nuanced approach to comedic roles in quite the same way - the punchlines sometimes going by so quietly you almost missed them on the first go-round - or delivered with such staccato bombasity you barely have time to register what's happening before you find yourself laughing.  And that's part of what makes the movies work so well on watch after watch after watch.  He managed to wrangle the cartoony freneticism Brooks brought to the screen in Blazing Saddles, but he was never the straight-man.  He was just funny in his own right, and he knew how to make a scene work far better than it should, even when the jokes were so broad you could drive on them.

Of course, his Willy Wonka came seemingly out of nowhere, a manically perfect performance not intended to comfort children but there for them to understand when, maybe, they got a little older.  That weariness and dissatisfaction of the genius among mortals, that keeper of the faithl in the land of the wicked, just brilliantly played.

I'll always like Young Frankenstein best, but that won't come as a surprise.  There's nothing in the film he does I'd say doesn't work.  He's in perfect sync with everyone in the cast, holding all their various tones together and making for one of my favorite comedies in any medium.

I'm very sorry to hear Mr. Wilder has passed, but am so grateful for what he brought us, and I'm cheered by the massive outpouring in social media.  I hope he knew, and I hope his family knows, how much love people had for him and his work.

Well said. Wilder was unique among all actors I've watched. He had this mischievous twinkle in his eye combined with a warm, gentle spirit. I saw it in all his performances. I can't think of anyone who pulled it off so genuinely. That became clearer than ever after watching Johnny Depp's weird take on Willy Wonka in Tim Burton's remake.

I remember reading about how devastated he was after Gilda Radner's death, and I find myself seeing a little bit of melancholy in his face when I watch his films now, which I am certainly projecting, but maybe that's because he has a vulnerability on screen that makes it easier. I don't know. Probably just pop psychology.

Anyway, Young Frankenstein is my favorite as well ("Put the candle back!"), but we just watched that a couple weeks ago, so tonight his tribute will be a viewing of Blazing Saddles!