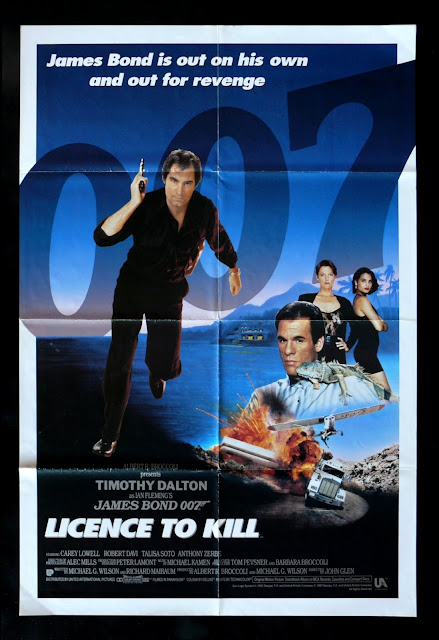 License to Kill (1989) features one of the hokiest damn openings of any of the Bond films.  I was a little bit embarrassed for everyone involved as - before the credits sequence - Bond and Felix Leiter skip out on Felix's imminent wedding to jump in a chopper to go catch a drug dealer in the Florida Keys in one of the worst executed attempts to capture an international criminal ever is committed to film.  And the sequence ends with Felix and Bond parachuting from the unlikely capture of the drug dealer into Felix's wedding, not a hair out of place.

It's just kind of stupid and cartoonish, and a weird way to set the tone for the first Bond movie to really delve into gratuitous violence, 80's-style.

The movie, which struggles from beginning to the end with what to do with women, has Leiter's newly minted wife seemingly throwing herself at Bond, which she isn't according to the script, but the actress seems to have very different ideas.  Look, it's goddamned weird.

The drug lord (played by character actor Robert Davi) bribes his way out of jail, and returns to capture Felix and murder his new bride (hint - never marry an agent in a Bond movie.  Your life expectancy drops to less than 24 hours from "I do.").

Then a bunch of scenes are lifted from unused portions of the novel of Live and Let Die, and you get the feeling they're trying for that gritty Ian Fleming Bond, including brutally maiming Felix and thinking he's dead when they drop him off back at his own house (where Bond finds him).

Mi6 comes and intercepts Bond as he begins his investigation, and basically threatens to kill him, sorta, as he resigns.  This whole part made almost no sense, because as of now - 007 was now just James Bond: guy.  And no matter how the film ended, I don't see how he was supposed to be getting his job back.  But I also don't work in Intelligence, so maybe this shit happens all the time.  Who am I to say?

From here, the movie becomes a checklist of 1980's action movie riffs, from insanely wealthy drug-dealers with a rage problem to a scene with something kinda like a strip bar to an overly chatty woman insisting she's Bond's equal but (ha!) we know she's not.  To ninjas.  Yeah.  Goddamned ninjas.  And a truck chase that makes no sense except somebody watched The Road Warrior and wanted something similar.  Oh, and televangelists.  The kids will never understand the 1980's cynicism about televangelism.

In some ways, the movie adheres to the Bond ideal.  There's a casino scene, women sort of throw themselves at Bond, some spectacular stunts, an overly twisty plot, and lots of scuba stuff (because there is no snow skiing in this film.  We have to have one or the other.).

But as the movie focuses on Bond's personal vendetta and has some of the more gratuitous violence of any of the movies until we got to Casino Royale, and is deeply worried about cocaine money and shipments - it feels sort of off from beginning to end.

The movie has some scripting issues, but the casting didn't seem to help much.  This is the first movie that genuinely contains some acting that I felt was a mismatch for how the character seemed written.  I just watched this movie and I'm not entirely clear what the character "Pam Bouvier" was supposed to be to Felix Leiter other than a name in one of his files.  A contact of some sort.  Somewhere online I saw she was supposed to be CIA, but if that's true, very little of what they do in the movie makes sense.  Like - why don't they call the CIA?  Anyway - my point is that the actor, Carey Lowell, who plays Bouvier seems weirdly cast.  She seems to be taking acting cues from Meg Ryan, doing a sort of cute-pouty thing that I can't say works terribly well in context.

But that was kind of the issue in female roles in the 80's.  If you weren't as passive as Maryam d'Abo in The Living Daylights, you had to do lots of being freaked out and wise-cracking while being less competent than your male lead.  As I firmly believe Commando is the ur-Action movie of the era, we can point to Rae Dawn Chong's performance as Cindy, the flight attendant who gets wrapped up in the adventures of John Matrix.  She's also, of course, a pilot (which... so is Ms. Bouvier), so our hero doesn't need to be his own driver, I guess.

Apparently something had also changed at the Bond offices and sex was no longer to be the casual affair it had been since the start of the films.  Now the girls are in love with James Bond, which is somehow less believable while also feeling far more awkward in execution.  Bouvier, intended to be played as sexually aggressive, instead seems to have skipped twenty minutes of film-story to suddenly want to have sex with Bond just after discovering their boat ran out of gas miles out from the coast in the middle of the ocean.  It's not sexy - it's weird, and even Bond seems a bit confused.

Lowell isn't great, she's certainly miscast, and you get the feeling all the producers noticed was that she looks terrific in an evening gown.  Curiously, she has also been married to both Griffin Dunne and Richard Gere, so there's your useless trivia of the day.

Our other Bond girl, maybe the villain's wife?  His girlfriend?  It's unclear.  Literally declares her love for Bond seemingly out of nowhere.  She's set up to have an interesting character arc, but it literally goes nowhere and she's more or less a prop to show us that we're dealing a bad-guy who is maybe no more or less cruel than other Bond villains, but that we're willing to show the violence this time.

Robert Davi who plays our lead villain is a classic "hey, that guy!" character actor who seemed to be in every fifth movie you'd see back in the 1980's.  He's still very much active, but I don't see him in much these days.  If you want a guy who can play ruthless, he's your man.  If the character is a bit flat, he feels like riffs on every Latin American drug lord who had preceded him in film and television over the past decade - and if you weren't there for the 1980's, that's a lot of drug lords.

Felix is played with gameshow-host cheese by veteran Leiter-actor David Hedison who had failed to be eaten by a shark in the original film of Live and Let Die back in 1973 (again, the character is brutally assaulted and maimed in the book of the same name).

And, hey, they did include Wayne Newton as a televangelist just happy to be there as the movie goes along.  He may tie Desmond Llewelyn  for giving the most fun performance in the movie.

It's just kind of frustrating and sad to see the Bond offices feeling they needed to get in on this Latin American drug-lord frenzy that had occupied action movies for years at this point.  In the Reagan-80's, anyone tied to drugs was disposable scum our hard-drinking action heroes could dispatch without batting an eye, and in retrospect, there's certainly an undercurrent of "and they're in shithole countries, so who gives a shit if the hero blows everything up and kills everyone?".  Also - racism.

While certainly there's a movie in there somewhere in which Mi6 could have been interested in drug traffic and toppling a regime - certainly toppling regimes was the favorite sport of the Reagan-era intelligence community - making this a vendetta does play to the character of Bond in the books, but he usually was doing this under sanction of Mi6.  Instead, the movie ends suggesting Mi6 wants Bond back, but that seems unduly complicated given the shooting at Bond they were up to in the first third of the film.

This would be Dalton's final outing as Bond, and I'm deeply sorry we only got to see him do his thing as legit-Bond in one movie.  I like him, and I like him when he shows up in other movies and TV shows, so I'm glad that whatever time he spent in the role has kept him as a name people look for, while also not bogging him down with type-casting.

There's also an excessive amount of violence for a Bond movie - a sign of the times when Arnie was standing in fields with a machinegun mowing down guys in olive drab or Sly was using an uzi to take out a grocery store.  I guess the producers felt they needed to show Bond was playing in the same field, but they can't quite handle the change in tone the same way that would work rather well with Casino Royale, grounding the movie a bit with the realization that this was kind of ugly work our Bond was up to.  In this movie they're still parachuting into weddings.

I won't say it doesn't work at all as a movie - it kind of does.  It's just overly written, and it seems like the producers didn't find an idea they wouldn't shove into the movie, making the 2 hour, 15 minute run time at least 30 minutes too long for the story they wanted to tell.
Posted by The League at 1/07/2017 11:42:00 AM

This was, maybe not the worst, but the most forgettable Bond movie ever. I've only ever seen it once and never plan on seeing it again. It just didn't feel like a Bond movie to me.

Sad for Dalton to go out like that but Pierce was waiting in the wings. I can't wait to hear what you think about those outings which start well then crash and burn.