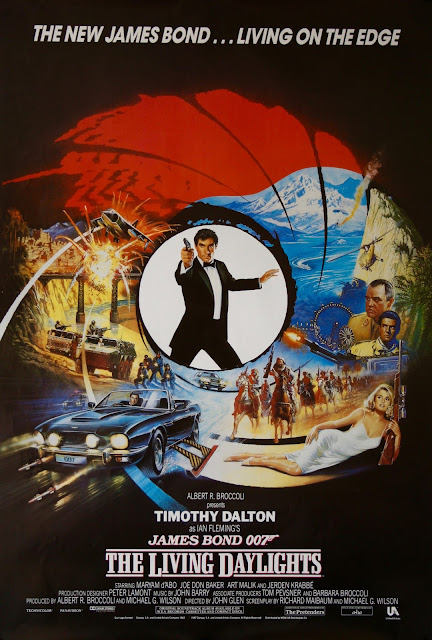 I've heard some say that Timothy Dalton is their favorite Bond, and I get it.  He's pretty terrific in this first outing as Bond, and now that I've read an actual Bond novel or two, he may be more in line with the first two books' Bond than his three predecessors.  Had they gone for the more rough-and-tumble Bond of the books with fewer gadgets, etc... as we'd eventually see with early Daniel Craig, and gone with Dalton, it would have worked just fine.  And the movie seems to want to use the stunt-rich opening sequence to demonstrate that with this new Bond, you can tell way less that the person conducting the action is a stuntman.  By the end of Moore's tenure, the cuts between Moore and his stuntman had gotten downright funny.

Dalton's got a charm that's understated, and far less cheeky than Moore or Connery, and a sort of controlled capacity for rage that Connery had and Moore demonstrated in exactly one scene of his entire Bond career.  In fact, the one time Dalton seems out of his comfort zone is in the opening sequence where he's literally fallen into a sexy situation, and you know Moore would have nailed this bit, but Dalton looks almost uncomfortable.

Our story - Bond is in Czechoslovakia (a country I have to routinely be reminded no longer exists) to help a Russian General defect.  He spots an alluring sniper waiting to take out the General, but feels something is amiss and, rather than snipe the sniper, simply shoots the rifle out of her hands.  The General is taken to England, but is seemingly recovered by the Russians.  Bond goes on the trail of the cello-playing faux-sniper, and international arms-dealing intrigue abounds.

I like the level of gadgetry in this Bond movie.  It feels like they stepped back a bit to make stuff that was plausible-ish, even if I have reservations over how many gadgets one could really stuff into an Astin Martin.  The escape route of the defecting Russian General has always stuck in my head as a stroke of brilliance.  And I've kind of wanted to get shoved into an oil pipeline myself ever since.

The stunt sequences and fighting scenes mostly work very well.  I'm actually quite a fan of this particular snow-chase, and I like the commentary baked into the Joe Don Baker scenes including the final fight sequences.

Directed by John Glen, it seems like he's back to his comfort zone with what he did well in For Your Eyes Only.  He's got a bit more serious content to work with and a script with some actual heft.

We're now up to Bond movies that I saw in the theater and remember social context around their release.  The press made a big deal out of the lack of sexy time on the part of Bond in this movie, and I'd argue that the romance is treated more like romance almost as in Casino Royale and less like Bond's usual "hello, I'm James Bond.  Yes, you may disrobe," approach to the proceedings.  And I very much remember reading at the time that the producers felt this was the era of AIDS, and Bond wouldn't be simply boinking his way around the globe.  Maybe, maybe not.  I suspect it was a happy accident of scripting a back-to-basics Bond.  But it doesn't hurt to see Bond actually build something of a relationship.

Before the movie started I told Jamie "this is one of my least favorite Bond girls.  She's kind of useless."  And, if you're going by my favorite Bond girls being Vesper Lynd and Pussy Galore, a damsel-in-distress may not be creeping up to the top of the heap.  That said, Kara the cello-player, played by the fetching Maryam d'Abo*, is more sympathetic than I recalled, and more of a casualty of the sexual politics of the 1980's (ie: weak writing for women) and a Bond script not particularly interested in doing anything colorful with their female character (singular).  She's not the empty-headed Honey Ryder of Dr. No, but it's not exactly Michelle Yeoh's super agent of Tomorrow Never Dies, either.

Like I said, I think the movie gets away from them just about the time they wind up in Afghanistan.  The scale becomes suddenly much larger as the villain's plot gets locked in which seems almost pedestrian as not a single nuclear weapon needs to be disarmed.  But the Mujahideen, meant to add a bit of both contemporary events and allies for Bond, seem like an oddball add-on that doesn't entirely work, especially as it seems like Bond causes a WWIII of an international incident in working alongside them.  And, frankly, the whole "fighting on a cargo net outside a moving plane" but just feels awkward more than interesting, exciting or fun.

It's probably also worth noting that this movie and Rambo III were more or less my context for Afghanistan growing up.  Russia was up to their elbows in this war, which was clearly their Vietnam, and ignoring that one should never get involved in a land war in Asia.  It's interesting to watch those 80's-era movies which portray Afghani fighters as salt-of-the-earth freedom fighters as we consider the context for what followed over the next twenty years.

All in all, I kind of dug it.  And I'm excited because I've never seen the next film in our line-up, License to Kill.

I love Dalton as Bond. I've tried numerous times to rewatch License to Kill, but just can't get past the first 20 minutes. I suspect it was pretty solid on paper, and Dalton plays him hard AF, as the kids would say.

Good luck. I hope you like your Bond in pleats.

I would pay to see him in a Bond one-off (as bad an idea as that is) after watching Penny Dreadful.