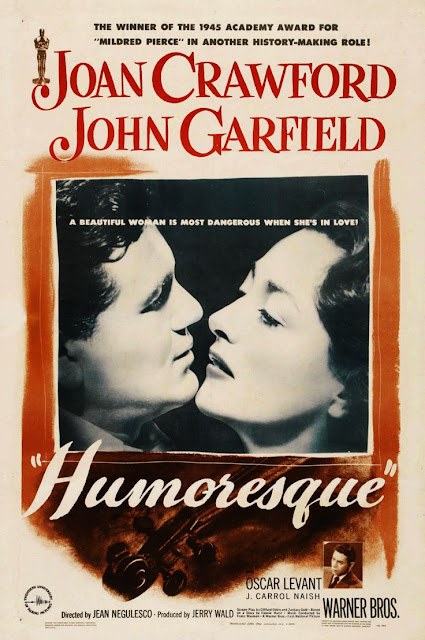 As mentioned, I'm listening a bit to the You Must Remember This podcast during my commute, and moved on to a 6 episode run on Joan Crawford.  One of the topics covered toward the end of the series is how much of an impact Mommie Dearest (starring Faye Dunaway as a cartoonish Crawford) had on the popular conception of Joan Crawford, surpassing the image the actress had worked tirelessly for decades to make herself a star and retain her star status for decades past those of her contemporaries.

Humoresque (1946) should probably be thought of as a John Garfield picture, first and foremost.  He's certainly got the most screentime and the longest character arc.  The actions of the other characters in the film are focused upon what focused on their relationship to Garfield.

He plays Paul Boray, a violinist who rose from working-class roots in the streets of New York to become a national sensation within the high-class world of classical performance.  The film is a melodrama, no doubt, and an examination of a man of extraordinary talent and passion and the women in his life, including the girl-next-door, his mother and the wealthy society woman who elevates him from nothing to star status, but who carries an incredible amount of baggage.


Crawford plays Helen Wright,  wife of a New York blue blood who, himself, doesn't seem to have to work for his money.  Not much is said about how the Wrights came to marry, but you can take some guesses about what happened and how it went wrong.  Now they hold parties in their penthouse apartments and her husband watches as the young men fawn over his wife, still beautiful and strong while he had faded, aware of the situation but not strong enough to do anything about it.

At one of their parties, Garfield's violinist with a Brooklyn-street-kid attitude attends with his piano-playing pal (Oscar Levant in a nigh-Henny Youngman-esque role) who is hired to entertain the crowd.  On something like a dare, he picks up his instrument and quickly draws the attention of the crowd and Helen Wright, who challenges him in front of the crowd (and loses).  But this is a flirtation, and soon Wright is helping Paul with his career.

It's worth noting here that Crawford was about 40 at the time of this film, and Garfield about 33.  In Hollywood terms, this is a May-December romance (the actress playing Paul's mother is the same age as Crawford).  It makes it difficult to peg how old, exactly, either Garfield or Crawford are supposed to be playing.  And, indeed, Paul's mother, while glad of her son's success, is deeply and vocally suspicious of "Mrs. Wright".  Meanwhile, the girl next door keeps showing up, and it takes her a bit to click as to what's going on.

But, of course, no matter what he may believe intellectually, Paul is in love with his music above all.

It's a strange movie to arrive right on the heels of WWII.  It certainly never acknowledges the war, not any more than the prior year's Mildred Pierce does, either, and I don't know if this is just a sign of how much people were ready to move on or if the audience for the film wasn't being reminded of the war by the studios.  It is a remake, and from a book, and so, like Mildred Pierce, it was written pre-war, so why insert the war?

The movie is very well shot, including some complicated bits where Paul plays the violin like a champ - apparently by using the hands of Isaac Stern and others - while Garfield rested his chin on the violin.  But, in general, the film itself has some excellent lenswork by Ernest Haller (who worked on everything from Gone With the Wind to Rebel Without a Cause).  Including the final scenes for Helen in the film, which were remarkably well assembled.

And while I said that the movie should probably be thought of as a Garfield movie, it's hard not to see it as a Joan Crawford movie.  For as strong as the story-arc, character and performance by Garfield - both the character of Helen Wright and Crawford's careful portrayal are more complex than you'd guess from the arc the movie begins upon.  Certainly Crawford's dissatisfied woman of leisure is far from the only character you'd see in movies like this during the era, but this particular film digs far deeper into who that character is rather than making her someone sniping from the sidelines and making the lives of our main protagonists miserable.

The story has hints of Kate Chopin's The Awakening, certainly, and presages Douglas Sirk women's pictures - and, in fact - is mostly really about Paul.  But dropping Crawford into any picture tends to draw focus, even when you've got John Garfield to contend with.

I'm not quite sure who to recommend the film for - it would certainly be an interesting entry to put in a "music in film" series, as the movie isn't exactly forgotten, but Crawford's movies have become a bit taboo in the post Mommie Dearest era, assumed to be high camp (and we got dissect Johnny Guitar some other time).  And while I'll always point to Mildred Pierce as a starting point for "getting" Joan Crawford - and it's certainly the Rosetta Stone for this era of her career and later - the movie is a better melodrama than you'd expect.  I, myself, planned to watch it over two sessions and instead stayed up way past my bedtime to make it through.