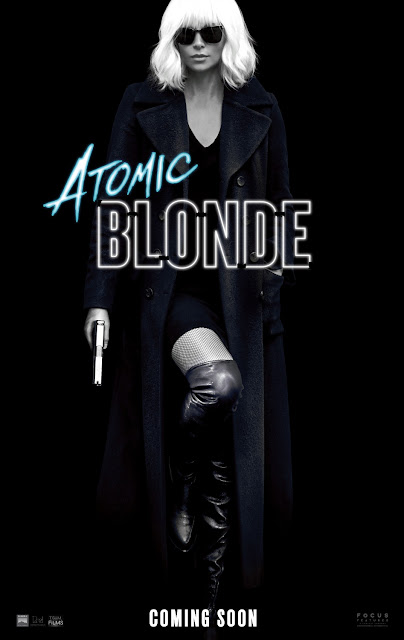 The entire movie hints that the events will either tie in to the fall of the Berlin Wall or become enmeshed in that landmark moment in history - but, ha ha... psych!  That would mean the movie understood how to make itself interesting and/ or have plants and pay-offs.

And, of course, the movie goes for a last minute triple-cross that may actually negate literally everything you've seen before as the product of an unreliable narrator.  At minimum it means nothing you watched before matters all that much, but don't worry...  if you still care about anything that's happening on screen and how or why or what it's all about by this point, you're more invested in ciphers than I am.

All that said, it's not a *terrible* movie.  This isn't head-to-palm stupid, exactly.  It's more the product of a Xerox of a Xerox of too many films like this and the current trend in fetishizing the 1980's while utterly misremembering what the 1980's were like.

If the movie made one crucial mistake, in an attempt to show the filmmaker's "I went to film school!" bona fides, the characters literally walk into a screening of the late 1970's Russian sci-fi film, Stalker (now available from Criterion!), reminding me as a viewer that they are watching a better movie than I am watching.  I can't stress enough to filmmakers:  do not welcome comparisons to well-established works in your flick.

And... seriously, you should have paid more attention to how Michael Mann in his prime would have done all of this.   Especially if you're going to use neon as your indicator that it's the 1980's.

When it comes to well-executed modern action sequences, it seems like Hollywood has finally moved past the "rapid cut so much we can't tell what the hell is going on" stuff that marred a decade's worth of actioners and what little I've seen of the Transformers franchise.  There's some stunning work here, and Charlize Theron - looking for her own action franchise in whatever her character's name was - is more than up to the task of committing to the believable and brutal close-up combat sequence.

What's maybe a little surprising is how much the sex/ sexy angle is played up and that Theron, who doesn't need to be doing nudity at this point in her career, absolutely goes for it, maybe flipping the script in a way on how these things usually work in spy-flicks - but not exactly putting her in the gender-flipped role.  It rides the razor's edge of good old fashioned prurient interest from a by-gone era (hey!  The late 1980's!) and something I can't quite put my finger on.

In all honesty, prior to Mad Max: Fury Road, I was pretty ambivalent about Charlize Theron.  I hadn't seen many of her movies, and when she did show up in something I was watching, she wasn't anyone I found particularly engaging or memorable.  And this movie reminded me why. While she radiates a certain intelligence, and there's no denying that she's startlingly attractive, neither the way the character was written nor anything about her performance makes you care a whole lot about whether this movie decided to turn on a dime and put a bullet in her before the credits rolled.

Certainly, that's a major failure of script and trying to keep the audience guessing, but if Atomic Blonde was intended to be the first in a series (and I suspect it is), actually giving a @#$% about the protagonist for reasons other than that she dresses well and gets the most camera-time seems like a good idea.  So, yeah, I'd have liked to have seen something other than laconic detachment for two hours.

The obvious pitch on this one is "a female James Bond" or "a female Jason Bourne", and there's nothing wrong with wanting to make that a thing.  But I'm not sure this movie understood what built that audience - and it wasn't tediously byzantine plotting and two hours of delivering dialog in monotone.  Frankly, I wanted to like this movie - Theron looks rad as hell in her spy get up, and she can throw a totally buyable punch and whatnot.  But I shouldn't be crossing my arms mid-movie thinking how much I'd rather see Rucka's Queen and Country adapted into a film (this was adapted from an Oni Press graphic novel I'd never heard of).

I'm missing something, because the movie is tracking pretty well at Rotten Tomatoes.   I assume the reviewers have seen all the same movies I've seen when it comes to this sort of picture, so I'm not really sure where our opinions part ways.  I'll take a look at some of the write-ups and see.

I've seen a lot of movies this summer and have been at the cinema almost every weekend for something or other (finally seeing Dunkirk on Tuesday).  And this was probably the movie I am most certain I'll forget having had seen - followed closely by Baby Driver, which I liked well enough, but it's not exactly a game changer to the genre.

The trailer didn't look that interesting to me. I don't think I saw a scene in it that wasn't lifted from a different movie.

Yeah, I mean I don't want to piss off any of the audience that was jazzed for "it's a female Jason Bourne", but at some point you need to not just take good stuff from those movies and drop in Charlize Theron. I mean, I'm done with Jason Bourne because it's been looping in on itself since the second movie. Give me an intriguing character and/ or premise so I don't mind that there's only so many things to do with spies.

That said: fight choreography is insane. Theron is a beast.

My first comment to Ryan afterwards went something like: "I feel like a dumb, because I have no idea what was happening in that movie." Much to my relief, he confirmed that it was indeed pretty murky and bogged down by muddled dialogue.

Agreed about the crazy impressive fight sequence, though. It was the only time during the film where I sat up to take notice. However, even that portion fell a little flat when that's the moment where I realized I had no stake in any of the characters. Disappointing.

I love seeing strong female leads in movies. But when that hype overwhelms objective, critical reviews of a film or show (i.e., a weak script is till a weak script) ya lose me.

Minus "Mad Max: Fury Road" I've not been clear on what people love about Theron, so I accept that I'm missing something here. This could be on me. But, yeah, it's pretty boiler-plate stuff with a really nice budget.