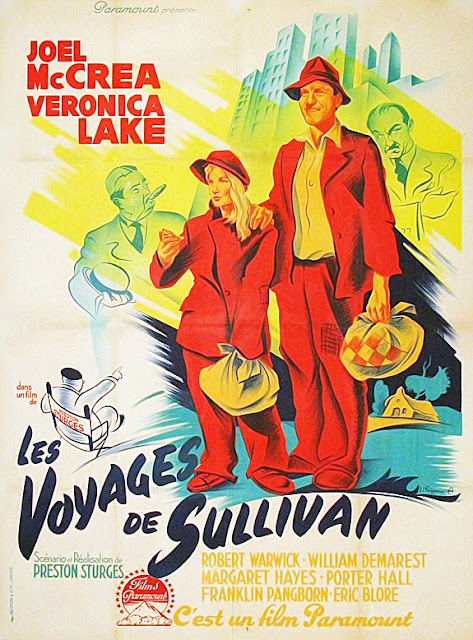 To be fair, Sullivan's Travels is not a Gone With the Wind sort of movie everyone sees at some point.  It's more of a shibboleth for folks who pass some threshold of a certain kind of movie watching.  There's no doubt it's a comedy, but it's one with a genuine heart and a head trying to sort things through.

The film acknowledges not just the coming war, but expresses anxiety about it and acknowledges the Depression - something so many Hollywood movies avoided dealing with in favor of comedies about socialites in high-rise apartments or country houses.  And, in point of fact, that disparity is what the movie, itself, is about.

Sullivan's Travels follows a director of light comedies (Michel Sullivan, played by Joel McCrea) as he - in a very 1941 mood - decides he's not telling the real stories that really impact people.  Depression.  War around the globe.  Need and want.  Sullivan was born upper class and has had a wildly successful career since his mid-20's.  While he wants to tell a story of the common man's plight, he realizes he can't do so as he has no relevant experience.  He decides (by accident) that what he will do is go off in tramp's clothes and a dime in his pocket to see how "real people" live.

The movie is curiously episodic, and swings from screwball to, really, pretty dark, with sections including a "land yacht" full of studio flunkies required to follow him at a respectful distance, an accidental return to Hollywood, meeting a spunky Veronica Lake, a joint voyage across America and a twist I won't spoil if you've not seen the movie.

If we spent our write-up of The Shape of Water grumbling about how the Academy rewards movies for being about movies, this is the film that passes through the looking glass and self-examines that concept.

For me, watching this movie is inseparable from my teenage and 20's film watching, which included a worship of the Coen Bros., who were clearly impacted by Sullivan's Travels.  Barton Fink is a dark-mirror parable of a writer brought to pre-war Hollywood who has been writing plays of the sort performed by The Group Theatre, who tried to bring the life and times of "the common man" to the stage and in moving to Hollywood.  Barton's realizations of his own shortcomings in this regard play out... differently.

Further, The Coens named their film O Brother, Where Art Thou? after the movie within the movie of Sullivan's Travels.  And some day we'll rewatch that and get into the kaleidoscope of meaning there.

But clearly the Coens, as very young men at that, had taken the lesson of the film to heart - and that's that maybe there is a place for those heartfelt, sincere movies - but there's also a gift in what Hollywood's escapist, fantastic comedies and adventures can provide.  And... maybe telling those stories of the common man is a more difficult thing, and a thing that - were you to really learn what other people go through and feel - might not leave you so confident in your decision to proceed.  That maybe the common man already knows what's up with the common man and doesn't need you showing him.

(late edit:  there are some unmissable parallels between this movie and Beggars of Life, a movie that very much wanted to share the miseries of the hobo life.  And also featured a very attractive woman failing to pass in any way for a man despite taking on a man's wardrobe.  But I forgot to write about it, so that's all I'll say for now.)

It's something I'll be thinking about for a while, and it's something to keep in my pocket as we consider why some movies are considered "serious" or valuable, and others aren't.  We also don't want to tip the scales too far and claim inherent and equal value in everything that gets a chuckle out of an audience.

Oh man. How did I miss this?

It was an Alamo Victory screening. I literally popped up twice before the show to see if you were in the house. I shoulda called you. Sorry.