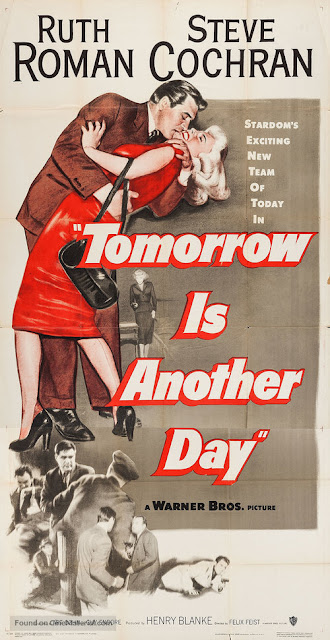 Again, I am loving the hell out of Eddie Muller's Noir Alley series on TCM.  In pretty short order, it's going to air twice per weekend, so either catch it Saturday night or set yer DVR's, as the kids say.  Every installment features Eddie and his encyclopedic knowledge of mid-20th Century Hollywood, and honest assessment of the pictures.  He doesn't try to oversell movies that don't deserve it, even when he found something about the movie worth putting it on the air.

Tomorrow is Another Day (1951) is such a movie.  Maybe not the world's best film, but it has it's good parts, including Ruth Roman in general.

Steve Cochran plays a 30-ish guy getting out of jail for the first time in 18 years.  He was sentenced as an adult at just 13 years-old for a murder.  Between the script and Cochran's frankly pretty deft performance - it's interesting to see Cochran's character as someone not just out of prison after a long time with few touchstones, he's still very much a wounded young teenager with no life experience in the body of a man (with a hairgame I have to salute).

He winds up in New York where he uses some of his hard-earned cash made from work in prison on a taxi dancer played by Ruth Roman.  The two don't exactly hit it off, but there's something there as the world-weary girl  realizes the guy really is the straightforward, awkward kid he seems.  But Roman's sugar daddy shows up, a gun is fired, and now the two of them are on the run.

In the outro, Muller rightfully rolled his eyes at the studio-assigned ending - which fits nothing of the tone of the preceeding movie and makes no sense, legally, anyway.  Still, I've certainly seen worse, and honestly really liked both of the main performers.  The script feels a bit like a mish-mash of a lot of things you'll see in other noir (sometimes better) films, but it's not actually terrible, even if some of that mish-mash doesn't always justify the romance - that grabbing of Roman you see in the film's poster above is one of those things that in today's context wouldn't happen if two character were supposed to eventually fall for each other.  Different times.