"Planet of the Apes" 50th Anniversary 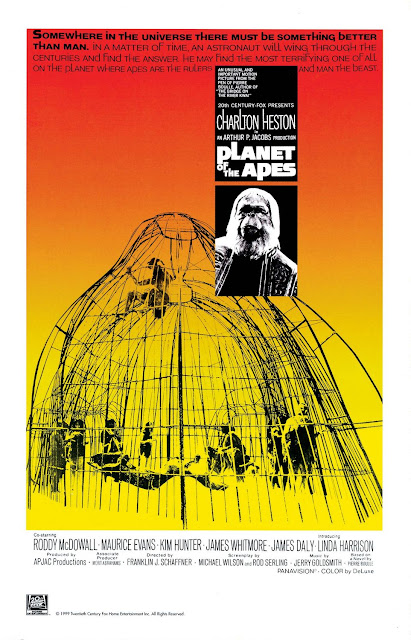 So, Shoemaker sent me a text alerting me that today is the 50th Anniversary of the Premier of Planet of the Apes!  I've found three completely different release dates, and February 8th is absolutely one of them.  I wasn't born yet, so I don't know, but I expect this is the Premier date the rest were release windows across the US.  Movie distribution used to be a bit different.


What I do know is that on our local UHF channel when I was a kid, in the summer during the day they would show Godzilla movies and then there was Ape Week at some point, and that was at night.  They showed all five Planet of the Apes films in a week long blitz of what looked like fun, but, man, the Apes movies are kind of a bummer.  All of them.  I mean, it's an all-ages film series about how man is doomed to self-destruction.  Like, not just fated to self-destruction, but has a genetic predisposition to make terrible decisions that will lead them to first nearly wipe out all life on Earth, but will then lead them to literally atomize the entire planet.

I hadn't watched the Apes movies from maybe Elementary School until some point late in college.  I know it was then, because I remember drunkenly relating the arc of the series to my boss at the time (never say I don't know how to wow my benefactors).  And that was when I went *really* ape for Planet of the Apes.  In fact, when 20th Century Fox had displays out for a 30th Anniversary VHS edition release at Target, Jamie, my brother and some poor guy just trying to browse movies watched as I dropped to my knees and shouted "YOU MANIACS!  YOU BLEW IT UP!  DAMN YOU!  GOD DAMN YOU ALL TO HELL!" at a cardboard Statue of Liberty.

Anyway, I like Planet of the Apes.  Like, a lot.  Something about it works less as the adventure movies for some reason people take them to be (they are not adventure movies) and more as parable.  And all of the movies are these perfect cautionary tales, taken together all basically begging people to think about how acts of aggression, big and small, all lead to the same place.  Fall of mankind at best, losing literally everything at worst.

Also, the movies are not overly fond of dogma or inflexibility.  Especially when those things lead to harming others.  And, of course, slavery is bad.

The first movie is based upon a French novel, which I have actually read (in English).  The screenplay was originally adapted in the US by Rod Serling - yeah, Mr. Twilight Zone - but what made it to screen, despite the definite Twilight Zone-ish ending, was the product of rewrites and others working on the movie.  Everything I've heard about the Serling script suggested it was actually kinda close to the novel.  Which, by the way, ends maybe more close to the Tim Burton version than I'm usually happy to talk about.

Frankly, the movie's ending has a lot more depth instead of just feeling like "oh, well, that was weird..."

The first film spawned those four sequels, and everyone sort of has their favorites.  Mine is Conquest of the Planet of the Apes.  I find Beneath interesting, but a bit off - like there's two different movies overlaid on a single film and in competition with each other.  Escape From is a fantastic movie, but is also the most heartbreaking of the movies, and lacks the deep sci-fi backdrop, trading it in for the real world.  Conquest is the most visceral of the sequels, and I respond like crazy to the Ape revolt in a brutalist landscape that looks amazingly like the buildings where I attended film classes while in college.  Battle for has some really interesting stuff, but is hampered by budget and the fact it feels like it was shot at a summer camp.  But Paul Williams is pretty great.

I've only seen the Burton Apes remake once, and that was plenty.  All I remember was wondering why Tim Burton took a semi-cerebral sci-fi franchise and just 90's'd it up in the worst ways possible, and let the humans talk and seem like they'd just been evicted, not that they were a lower form of life.

I won't write about the new trilogy or we'd be here all day, but I loved those movies.  All of them for different reasons, and I'm very glad they exist.

But, if you've not watched Planet of the Apes before or its been more than ten years, put it on.  It's a heck of a film.