Shark Watch: The Last Sharknado (it's the 6th and final Sharknado) 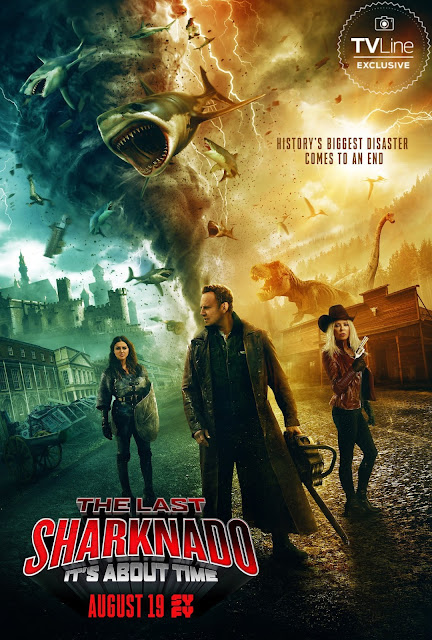 Well, it's all over with.  No more Sharknadoes.


Yeah, yeah.  I've heard from those of you who don't like knowingly bad movies.  We're going to have to just agree to disagree on that front.  I agree, most of them are crass time-fillers, and the only right way to watch them is to view the first 15 minutes, walk away, and then watch the last fifteen minutes to see how they wrap it up.

But occasionally something comes along that is brilliantly stupid.  And there is no question that the first Sharknado was some sort of major evolutionary jump for The Asylum, who had mostly been making really cheap knock-offs of summer movies straight to home video and had also found a niche by combining sharks with other concepts.  Ghost Sharks.  Sharktopusses.  Giant Sharks.  Plus, alligators and other animals doing same.

Pretty clearly they were just cramming ideas together, and... who knows?  Maybe someone put Twister together with a Shark.  Maybe it was just someone saying they had so many shark concepts, it was like a sharknado spinning up at Asylum.  Or maybe someone truly believed in the story of a man trying to save his family during a catastrophe in LA, and that catastrophe was a horrendous storm raining sharks down upon the greater LA area.  I'll never know.  But I watched it.  And between Tara Reid's return to television, Ian Zeiring's winning heroism, John Heard slumming, and a whole lot of sharks...  plus a lot of winking and a whole lot of openly stealing stuff from better movies -  It was a great combination.

It was nuts to hear they were going to make a second one - but they did!  And it was bigger and full of cameos of all sorts of people (they've since edited out the Jared Fogle equence).  Follow ups grew in scope and scale, including going to space (yes, there are Sharknadoes in space) and globe trotting adventure.  And, of course, this final installment as our heroes travel through time to stop Sharknadoes throughout history because something something if they stop them in the past, there won't be any in the future).

Somewhere over the series, Tara Reid became a cyborg and then a robot.  They had a kid named "Gil" who had a flying, time-traveling Humvee.  And Vivica Fox was involved.  And all of that plays out in this final installment as our heroes meet George Washington (Darrel Hammond), Merlin (Neil DeGrasse-Tyson) and travel to a far future ruled by robot Tara Reids and flying metal sharks.

I mean, if you want to look down your nose at all that, that's on you.  But for me, I'm going to just be glad this thing exists six times over and posits a future in which Vivica A. Fox is elected president.

It was a fun ride, and always had that feeling of Hollywood's D list putting on a show.  Heck, when you're putting Tori Spelling in front of the camera again, you're clearly not trying to make Citizen Kane here.  And as much as I understand the desire for a good, sharky horror film - I also get a charge out of just seeing people having a good time.  If I didn't, I wouldn't like stuff like Adam West's Batman, Axe Cop, and any ol' mish-mash of stuff that's not taking itself very seriously.