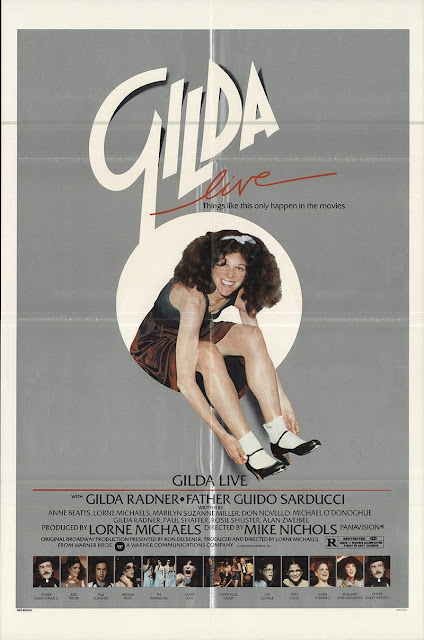 
Honestly, I didn't know this existed until I was scrolling through TCM's lineup looking for Halloween movies and it was tucked into the schedule.

I suppose the Fathom Events have somewhat taken away the concept of the concert films people would pay to go see in the theater, paired with HBO specials and now Netflix specials.  But there was a time where people paid money and went and sat in a theater and someone would play a film of a standup routine or a concert or whatever.  It didn't last all that long, really, but it doesn't seem weird to me that it happened, because I was growing up in the age of Eddie Murphy concert films and when things like Stop Making Sense played the local cinema.  Kind of a weird conceit when the era of the movie musical finally died and was seen as too "artificial" or whatever.

Still, Gilda Live (1980) is still one step further.  It's really a showcase of her sketch characters familiar to fans of the early SNL seasons when Radner was a stand out among a cast of giants.  She can, of course, swear and whatnot as she's in a movie rather than network TV, but its new material working with fan favorites and was - I think - intended to be her send off after 5 years on SNL by Lorne Michaels, who tends to have a good-bye celebratory movie with many of his favorite cast members who leave to pursue other things (usually these movies are terrible).

This being early SNL, there's a curious, chaotic element to the stage show with an audience that seems not quite sure how they fit in as the camera cuts to them frequently, scene changes are covered up (beautifully) by Father Guido Sarducci who makes the most of the fact that the primary set for the show is a whole other proscenium arch added in at New York's Winter Garden informing the audience that they're witnessing a high school play, complete with a basketball backboard that swings in and out of the way of the stage.

The movie has some oddly big-name talent associated with it.  Mike Nichols is listed as the director.  Howard Shore on music.  Paul Shaffer is both actor and musician, and GE Smith plays himself on stage (I don't know Gilda and Smith's romantic status at this point), and it just feels like a bunch of name people who were on the upswing at the time, mixed with people who kinda disappeared after all this.

I won't say much more, other than that I think Radner's appeal and why she's so well loved all these years on gets a sort of button moment when, as Lisa Loopner, she gets the entire audience singing "The Way We Were", and this schmaltzy song from a movie I'm sure the hipper NYC crowds were not taking too seriously gets elevated through the shared awkwardness that disappears as the voices raise and blend into each other becoming something better than anyone heard before on adult contemporary radio of the era.