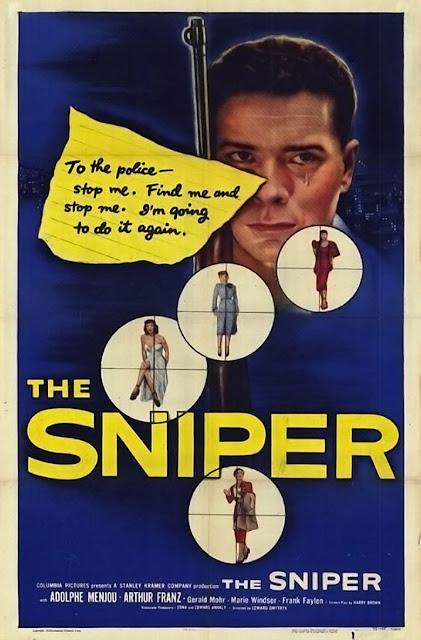 
In short - the film is about an ex-con (Arthur Franz as Eddie Miller) who knows he's having a psychotic break, that he will hurt people, and he can't control the urges prompting him forward.  We're given some insight into how he sees his interactions with others - he lives his life on the defensive, internalizing conversations as browbeatings, in particular when he comes up against women.  After believing he's making progress with a lounge singer (Marie Windsor), he learns she has a cool musician boyfriend and she's just being nice.  His shame, frustration and embarrassment culminate in him taking to the roof opposite the bar at which she plays piano and, when she leaves for the night, shooting her down in the street.

This gets the police involved (obviously) and as he takes a second victim he gets a taste for what he's doing.  Meanwhile, the police - so far behind what's happening they don't even know how far behind they are - try to make sense of the senseless killings while public sentiment gets stirred up.

A modern reading of The Sniper would step over the hard work that the film does bringing ideas about the pathology of the killer to life without romanticizing what's going on with the killer and trying to explain without forgiving in an era where psychology was still finding its footing as a profession and as how it was interpreted by the film industry*.  He's broken and been broken so long, he'll have left a trail of previous violence toward women - whatever set him off likely not a conscious part of his thoughts or decision making.  And, smartly, the movie shows us the acts that prevent him from receiving preventative treatment or anyone catching him even as we see what's triggering him, mundane as it might be.  In many ways, he's a vintage Incel - simply warped and frustrated and he's turned that fury toward innocent women.

Time and again, even in the span of the film, the killer seeks someone, anyone who will hold him or stop him before he does the next awful thing - finally dropping a plea to the police in the form of a note.  And, pointedly, the movie shows hospitals, employers and cops ignoring the signs.

The film doesn't kid around when it comes to how complicated it can be to find a "motiveless" killer and how the public and well-meaning but frightened people in power focus their energies on blaming the only people doing something about the case, the police.  But it also bars no holds when it comes to how unprepared for this sort of killer police were (and often remain) when faced with an unknown serial murderer,** pursuing the wrong sort of suspect via dragnet profiling rather than through precision based on the evidence - especially as they feel pressure to just close the case.

Shot in San Francisco, the movie has some of the best use of the sharp inclines famous to the city - and whether the filmmakers intended to use the multi-level nature of San Francisco as a frightening staging ground concealing and providing unique opportunities for vantage points for a sniper, or whether they intended the multi-dimensional labyrinth of the city to reflect the state of the killer, I'm not sure.  But it's a beautifully shot film and one I think of whenever I'm in SF.

Similarly the framing of Windsor - a particularly inspired choice for the chanteuse first victim - is fascinating.  Windsor's appeal wasn't just in her figure or sloe-eyed charm - she's always good at casual chit-chat and has a natural approach to her delivery that can read as extremely warm - something our killer would misunderstand. She's made a full-blown character in her scant scenes, and so her sudden removal has weight and impact to both the killer and audience.

Arthur Franz who plays the killer has the thankless job of playing someone luckless and - even when sympathetic - the audience sees him from a sort of removed standpoint.  He never seems like a character you necessarily want to know any better, and as he unravels, what lurks beneath, no matter the source, is rotten and corroded.  This is not the charming sociopath, but a broken man-child lashing out.  He's really pretty great, and lucky the movie didn't sidetrack his career into roles as a monster.

The cops themselves are interesting for the time - usually the young, hep cop is the one to bring new ideas while he wins the girl.  This isn't that picture.  Instead, our senior officer - Adoplhe Menjou - is the one who recognizes that the old tricks won't work and has to put up with the needling of his partner as he follows the advice of the SFPD shrink.

As Muller said in his bookending segments - it's hard to program something like this when there are shootings like this now every day in the US.  Growing up, we looked at the UT Austin tower with a certain trepidation, knowing what had occurred there, but now that sort of horror seems to unfold weekly in the paper - if not more often.  And, yeah, frankly I wondered if Whitman has seen this movie at some point before taking the elevator up to the observation deck.

But the movie's message (and it is a message movie) is trying to catch the psychosis early and often, that we need to deal with the young man when he first shows symptoms, not just dump him back out into the world because dealing with him is too much work.

It's not a "fun" movie.  It's difficult to say it's an important or impactful movie, but it is an interesting movie and one worth watching for historical context and to see noir when it's not a poverty-row cash grab.


*Hollywood then, as now, was very into psychology post WWII.  You can find psychologists showing up as characters in any number of films, and certainly littered across noir.  As in the case with The Sniper, they were often used to explain aberrant personalities - usually not forgiving, but with a sort of scientific analysis of how such behavior was possible.