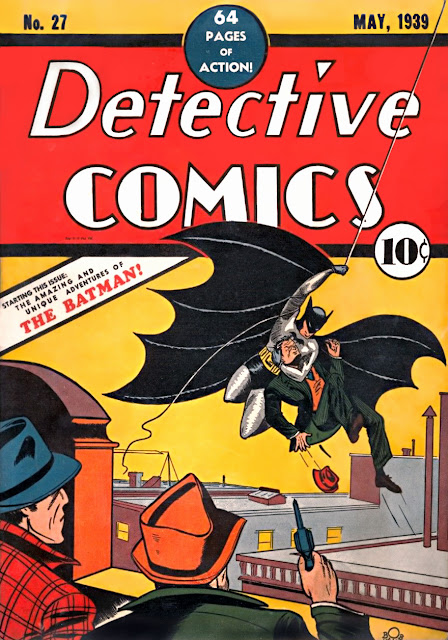 This week, DC Comics released Detective Comics #1000, a big event book as it well should be.  I'll pick up my copy at my local comics shoppe (I asked for the Steve Rude cover - we'll see what I wind up with, because I genuinely don't care  All the covers were terrific, imho).  What happens in #1000 matters less than the stunning achievement of 80 years of Batman, a character dreamed up in the wake of Superman's overnight success, and whose most outstanding achievement is the ability to fit into any tone or version of the character you want and still remain, fundamentally, Batman.


This will sound like nonsense, but family lore states that among my first words were "Batman", mostly because, in those tender years, when my mom needed to make dinner each weekday, she would plunk me down in front of the ol' TV to watch Adam West and Burt Ward camp their way through Gotham City.  I don't remember this, of course, but I do remember a knowledge that Batman was "my" hero.  Toys, dolls, capes, what-have-you - all with the Bat Symbol emblazoned on them - filled my toy box.  I very much remember rolling a Batmobile and Bat-chopper around my bedroom, both in Mego and Matchbox car size.

When I got into comics, it was the mid-80's, and so I pulled Batman and Detective off the spinner-rack about a year before they killed Jason Todd. I used Christmas money to buy a trade version of Dark Knight Returns from what is still my LCS, Austin Books and Comics - and, in that transaction, likely sealed my own fate as a lifelong comics reader (you're welcome, ABC.  You've made a small fortune off of me in the years since.).  And through Batman, I learned how much comics were *not* just for kids.

Funny enough, as I was trying to sort out comics, I came in just as Crisis on Infinite Earths was wrapping - which was not a terrible time to be sampling things.  I missed Miller's Year One story until I bought *that* trade circa 1986-7, but I also saw a reprint of Batman's origin in Secret Origins, a title I wish still existed. 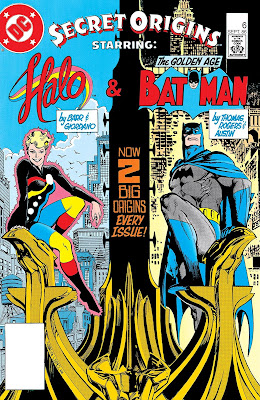 The issue contained a Golden Age version of Batman's origin, and I understood it for what it was.  Later, I'd find a book at the Austin Public Library that reprinted the first year or so of Batman's actual earliest adventures, including Dracula, guns, Julie Madison, gyrocopters and the whole "this is clearly just The Shadow" thing I'd figure out soon enough.

That Batman was able to jettison his roots as a knock-off of then-wildly-popular pulp figures, like Zorro and The Shadow*, and find his own path (of course still hanging onto Zorro's cave and the shared rich fellow secret identity), is nothing less than remarkable.  Especially for a character who was an "also ran" for the much of his early existence.  Ditching guns, brightening the suit, teaming with Robin, chilling with Alfred... all good stuff.

But it's amazing to see many, many people embrace the flexibility of Batman - to not find it weird that they're buying a t-shirt with a symbol of a guy in a really weird suit who chases down muggers for a hobby.  I can't think of another character we can see as a fun, goof about doing right who we put on toddler PJ's but *also* accept as a plutocratic paranoid fantasy mercilessly meting out justice in a kevlar suit whilst driving a tank, keeping the city a warzone so that he can go back to his billion dollar mansion and sleep between 10,000 thread count sheets and be served breakfast in bed by a tireless butler.

As messy and muddy as they are, especially that third film, what I think Nolan was trying to unencrypt was we see in Batman that makes the notion work, what makes a vigilante with some personal trauma so appealing.  What *is* our need for someone in a mask dedicating their lives to stopping madness?  What would make this a good person?  What sort of person would this even be?  It may not be a fantastical series of movies akin to most Bat-fare, but I think Nolan gets closest to at least looking at the machinery without deconstructing in plain view.  His Batman is a hero can take the world on his shoulders, carry the weight of the mess we've created, and do it in shadows, but with only himself to answer and to compromise.

I'll be the first to say the minds at DC have given Batman the most colorful supporting cast in comics, including cops, butlers, psychopaths, world-conquerors, femme fatales and an endless supply of dark-haired kids to train up.  Thanks to comics artists and Anton Furst and his successors, Gotham has been realized for the past thirty years as one of the most detailed, specific fictional locales on Earth (and no longer, basically, New York with different street names).**  I tend to think we all have a pretty good idea of Gotham as a 1970's-era New York with some old-world architecture.  And, of course, the shining beacon of the Bat Signal.

And - of course, the Bat-gear.  From cave to computer to mobile to arang, the bat-gear is what I always come back to.

These days my Bat-intake is not what it once was.  I'm well behind on the Tom King Batman comics and I just started picking up Detective in anticipation of 1000 (and a trusted creative squad).  If I'm being honest, while I like the trappings of Batman, I struggle with the sheer amount of Batman comics fans demand exist each and every month (you could easily buy just Batman comics and still have a stack every week).  Ive not been terribly impressed with any animated take since Bruce Timm and Co. hung it up, and I have no room for more Bat-stuff in my house.  And, yeah, I think a lot of the comics took the "Batman is a Mary Sue for Edge Lords" thing too far.

But, yeah, I'll still check out the comics, and I still love me some Bat-lore, and I want to see Batman being cool as hell in the comics.  Sure, I sometimes struggle with Batman, but - honestly - that has more to do with the fans and some occasional poor writing, that's just a sample of the ocean of Bat-content.  I still get jazzed to see good Batman and Robin art, I still want to read good bat-tales***.  I want a Bat-movie that blows my socks off again (it's only been a few years and I will knife-fight you over Dark Knight Rises). I want good cartoons and...  you know, I am so good on toy Batmobiles right now... it's fine.  I don't need any more.

But 80 years is amazing for anything.  That's, like, 1/3rd of US History with no end in sight and with WB still 100% behind their property, so like to keep making sure he stays fresh and relevant for every generation of kids who ever wanted to put on a weird cowl and cape and imagine doing right before disappearing once more into the night.

*this is not a dig.  It's fact.  And Superman's origins are just as rich in mining borrowed material.

**I may love Metropolis and the world of Superman, but his supporting cast has struggled for attention and both Metropolis and his rogue's gallery have suffered via too much re-imagining.