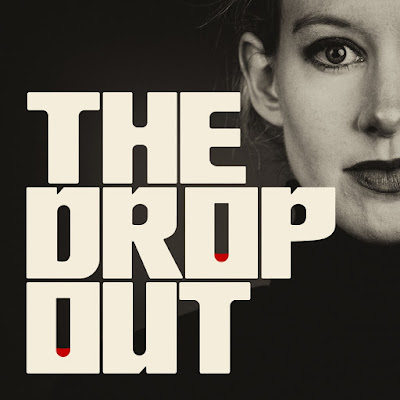 I'll be honest - after watching the Netflix doc The Inventor, I'm still stuck on the saga of Theranos and Elizabeth Holmes.

At Maxwell's recommendation, I turned to a multi-part podcast called The Dropout to see what wasn't in the Netflix doc, which seemed to just raise questions without ever really providing answers.  Produced by ABC news, The Dropout covers much of the same territory and the same figures, gets more on-the-record interviews, details more of what occurred, giving specific stories, certainly revealing points that I'm surprised the Netflix doc left out, and generally does a good job of building a solid case for what - at least transactionally - happened at Theranos.

But... I'm still baffled by how this even got started in the first place.


One of the things that barely gets addressed anywhere in the podcast is why or how a wide array of people who *should* have known better were credulous enough to believe the following:


That's just the investors and business partners - but... it's also a question to the press - one I know the answer to, but...

How did this not look maybe a little crazy to the press?  Why did this become just a series of puff pieces?  Why just chase the story of a personality?  Why were you willing to believe that just because *another* Bay Area company used the word "disruption" you should bite and not look into the claims - when you knew and highlighted the fact that the founder was a dropout and had no training in the very field she was supposedly pioneering?

That she started the company and sold the idea and marketed Theranos like a tech company is barely discussed, but that was *always* an inappropriate comparison.  Someone at CNN and the major networks in the news department would/ could/ should have known medical testing is not the same as writing software.  Or, at least, even in this report ABC News failed to grapple with the difference.  But, so did the Walgreens execs who hired Theranos and a bunch of retired Republican power players who threw money at the company.

There are endless comparisons to fellow dropouts, Bill Gates and Steve Jobs, but here's part of the deal: those guys actually showed working products and were on their way selling product before they were lauded as world-changers.  And I cannot stress enough how different the two industries really are - highly reliable and repeatable laboratory science is not the same as writing an OS in your bonus room.

I still don't know how Theranos was getting by without FDA approvals, touting said FDA approvals, or demonstrably proving their system worked.  How is that not a thing?  How do you look at the board or Theranos full of old guys with no science in their background and not wonder what is off here - that board should be people from household name companies you see at Walgreens.  Including Forbes, the New Yorker, Mad Money and everyone else who rushed to give Theranos/ Holmes a platform.

Also a fascinating tidbit that never really gets tracked down by ABC - how much total in hundreds of millions did Holmes raise from people who could afford to lose the investment - and how much do these same people, Devos, Murdoch, etc... who were investors, say we can't afford as a society?  I'll go out on a limb here and suggest that while people are free to do with their money as they choose - it's maddening to know what hoops actual scientific researchers go through to get a tiny drop of money when they're basing their work in well-documented prior research.  Maybe they all need turtlenecks and a Ted Talk.  I dunno.

The podcast does take a step back to chastise the press, including ABC, about their willingness to run with the story they were given, to hype the person telling them she was extraordinary instead of actually digging in to what she had accomplished.  But I'm not really sure, after spending hours focusing on Holmes, they ever do more than pick a sentence or two to describe Holmes - including a supposed smoking gun anecdote from high school - and call the total systemic breakdown on display, instead, the case of a single bad apple with hypnotic eyes.

What's really odd - if we're trying to profile an individual - is that nowhere in sight in the Netflix doc or ABC coverage is anyone wanting to point out how weird Holmes relationship was with Sunny, a man not just 20 years her senior, but a man 20 years her senior when she wasn't yet 20 herself.  Sure, there's some ellipses and trailing thoughts, but  played more for prurient interest than part of "what happened here?"

Look, even if she was of legal age and very bright, older guys can be a deep influence on a younger person, especially on someone whom ABC goes to pains to paint as friendless and in-her-own-world in high school.  After all, high school was only 18 months before she quit Stanford to start her company.  She was a kid and she wouldn't be the first co-ed who was told she was mature for her age by some older dude.

And, one bone I want to pick about a statement that gets repeated a lot in all of the interviews.  People keep saying Holmes was "well educated".  Well, no.  She wasn't.  She had a high school diploma from a reputable prep school, sure.  And, yeah, she got into Stanford, but she didn't come close to finishing.  You can be smart and do fine in life with your native intelligence, and I'm second to none in appreciating that.  But when the terminal degree in what Holmes was doing is an MD/ PhD, you'll forgive me if I think a decade or more of college is not the same as 3 semesters of pre-reqs.  She was, literally, uneducated.  It's fine.  You and I are also uneducated in biomedical science - but no one valued our biomedical company at 9 billion dollars and said we were Blood Savior Entrepreneur.

Finally, both employees (older people at that!) and the docs talk about Elizabeth's failings as a manager when you have to ask:  so, she's 19 when she starts this company, and I'm not sure she'd so much as interned anywhere or had a job...  how were you surprised that maybe she wasn't a genius of management and the corporate world?  Reading a Steve Jobs bio or two and buying some black turtlenecks isn't going to produce results.*  And Jobs was a notorious dickhole.  Even I know that, and I don't give a shit about how shiny he made computer cases or made them easy enough that they made The Jitterbug no longer necessary.

For reasons I cannot begin to sort out, it's like the spell of Holmes' celebrity is still there - that Holmes was a mature adult somehow at 19 and we still shouldn't question that notion.  The only person who seems to think this is nonsense is the Stanford professor who actually works with the world's brightest undergrads every day, and she's mostly brought in to say "look, Holmes didn't know what the @#$% she was talking about when she showed up on campus ready to tell us how to do things".

What's weird is that the story never really gets beyond "Holmes had penetrating eyes", like she has magical powers or some weird juju.  But a lot of what seems to have happened is that famous people were out of their depth in failing to get how science works, how scientific equipment works, and the whole thing entered en echo chamber of hype and publicity based on people who understand celebrity as a means unto itself.

I don't talk about it a lot, because it makes me sound like a nihilistic jerk, but part of why I gave up on the Oscars was my distaste for the parading of celebrities (who are doing fine, from what I can tell) as the annual human-achievement awards when there are people working to cure cancer, make cold fusion a reality, make a better mousetrap.

I can't stress enough how alarming I find the Theranos/ Holmes story.  Its one more time a culture of celebrity superseded the actual work going on in the world - where real people are doing actual work and actually know what they're talking about, and this time it may well have cost lives.

We - or, at least, the press - need to do a better job of understanding how science works, how scientific training works, and spend less time believing hyperbolic headlines that celebrate people "too smart for college".  We have enough problems with people deciding they know more than MD's, PhDs, professionals and subject matter experts, and while everyone is allowed to harbor the delusion that they're secretly just super, super smart - devaluing what an education is isn't useful.  Not here.

That Elizabeth Holmes was not curious enough to learn as much as she could about the field she wanted to revolutionize while she was in her formative years (and mom and dad were footing the bill) is not something to celebrate.  Had she stuck around Stanford, she may well have actually figured out how to accomplish what she wanted to do.

*I may also hold opinions about the cult-like status of Jobs-worship, and, indeed, the cult-like devotion to Apple product
Posted by The League at 4/01/2019 01:23:00 AM