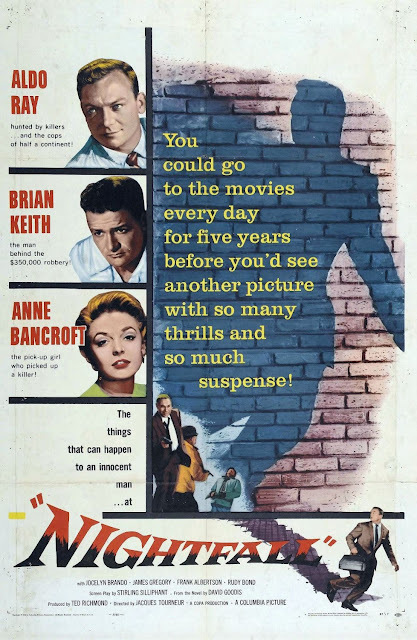 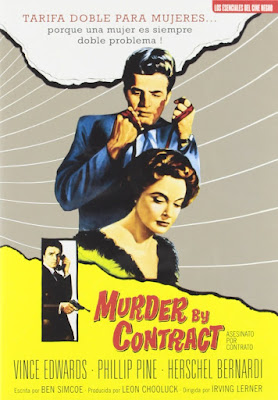 
This year I read the original David Goodis novel Nightfall,  and this was the second time I'd seen the movie - having caught it once before on DVD.  Nightfall (1957) stars Aldo Ray, Brian Keith and Anne Bancroft, and plays less to the weaknesses of a person consuming them and more to the average-guy in a tight spot, way in over his head thanks to circumstance brand of Noir.

Ray plays a commercial artist who accidentally got tangled up with some gunmen on the back side of a robbery.  In their attempt to cover their tracks, they more or less frame Ray's character, and he's hiding out under an alias, until the night they find him in a restaurant having just met Bancroft and starting to think he might make it and life might be worth exploring again.

As good as Ray and Bancroft might be, the two crooks in pursuit of Ray are the ones who leave an impression.  Brian Keith and Rudy Bond play a pair of crooks, one the smart planner, the other the mad-dog ready to pull the trigger, if he can't think of anything crueler.  James Gregory plays a detective trying to figure out what Ray is doing with his money, because his set-up looks all wrong.

There are major deviations from the novel (fine and expected), some of which make the material work better for a movie, some of which I wish they'd left in - they really tidied up Bancroft's character for the movie which felt like a bit of a loss and made the character far too one-note.  A tough sell when you're coming off an Ida Lupino movie the day before and you know what Bancroft can do with the right material.

Still - as a "guy in a spot of deeply unwanted trouble" film, it's really solid with a tight narrative employing flashback exceedingly well, and using Ray's general likability paired with his line-backer physique to good effect and selling some of what occurs in the movie better than you'd figure. Muller discussed the pivot to shooting brighter to accommodate TV secondary markets in conjunction with this film, and you can see why.  It's lit up in every frame, including night scenes (and day-for-night night scenes).

The second film, Murder by Contract (1958), was as fascinating to look and and consider from a construction stand point as it was as a narrative.  An inexpensive indie film picked up by Columbia, it's the sort of film where you can see the rented set pieces used and re-used and nothing ever adds up to flow as seamlessly as a studio picture.  Shot in just a few days, the movie is a shoe-string budget affair that can have the odd-pacing and lack of coverage for any given scene we might be used to in an RKO picture.  But - All of that seems to fit the raw feeling of the lead character, a guy with a straight job who gives it up to become a hitman when he does the math and realizes he'll do better financially whacking people.

Played by Vince Edwards, probably best remembered for playing Dr. Ben Casey back in the 1960's - Claude is a thinker who makes the lifetime crooks and goons he associates with a bit nervous because he's, frankly a weirdo who doesn't want to do his jobs with anything so simple as a gun.  He's not afraid to share his philosophy when asked, and the film indulges his monologues, letting the movie become a character study rather than a plot-driven thriller.

Paired with two LA-based thugs, (Phillip Pine and Herschel Bernardi), Claude is aimed at a woman who is set to testify against the big mob boss they all answer to.

There are a lot of influences at play in the movie, from the 1950's awkward exploration of psychology, to literary exploration of the era - up to and including existentialism.  The villains of other films are more or less bystanders, playing like secondary clown characters as they witness the strangeness before them, commenting and interacting like something out of Beckett.

But, the influence also pushes both directions - the gunman as doomed figure wasn't new in 58', but there's more of the doomed lone gunman that we'd see in movies of the 1970's and on in this film, and the near gravitational pull of doom from the first frame that more or less influences to this day how we think of some antiheroes.

Director Irving Lerner would drift more or less from here to television and editing, but he clearly had a POV if not the financing to quite pull it all together from a curious script that seems positively daring for the era.

And thus my Noir City Austin 2019 ended, with me leaping into an F-250 that came as my Lyft home.

I deeply appreciate not just what the Film Noir Foundation does to find and restore at-risk films, but in ensuring these movies continue to be seen, finding the next generation of fans and scholars through their spectacular outreach efforts.  While Muller is key, there's an army behind him in social media, design and production of materials, and help with merchandise and other key aspects of the enterprise.