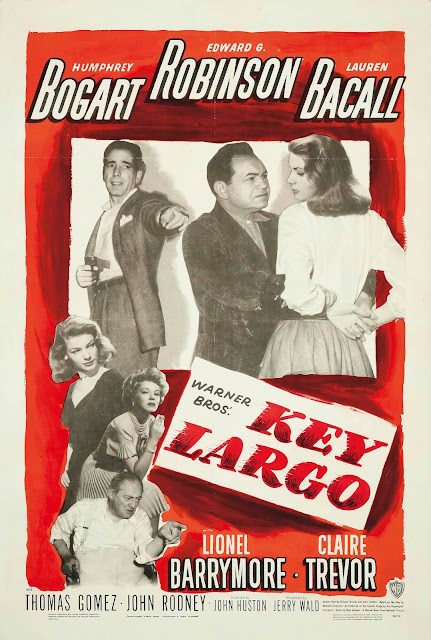 
Bogart plays a former Major who served in Italy in WWII coming to Key Largo to check in with the family of a soldier who died under his command.  Lionel Barrymore plays the father and Lauren Bacall his widow.  Clearly Bogart's McCloud hasn't been able to settle or return to the work he did before the war, and so he's drifting a bit when he arrives at the hotel owned by the soldier's father where his widow has stayed on.

Unfortunately, a group of gangsters has rented out the place and is hiding out.  Along with them is Claire Trevor playing a former chanteuse who was part of Rocco's (Robinson's) life when he was a Big Man in Chicago back before the war.  Now he's trying to make a comeback and is disappointed to find the girl he's summoned to be with him has become a drunk in the years since he left her behind.

As events begin to mount, a hurricane bears down on the island.

Like I said - this is a genre within the genre of noir (or movement of noir) - but this movie, much like a stage play, manages to find fascinating moments between the characters, watching them ricochet off each other, the ugliness and brutality brought by Rocco and those who benefit from his association a hurricane force of their own.

I don't want to say much more - rather, I'd just encourage you to watch the film.

Directed by John Huston, written by Richard Brooks and shot by Karl Freund, there's some fascinating stuff going on in the film.

While I already take Claire Trevor pretty seriously, she's simply extraordinary in this movie, a counterpoint to Bacall's brave-widow character - a woman damaged and tattered by association with a man who can only destroy what he touches.  If you want your heart broken, she's got the scene to do it (and Bacall has her own fantastic scenes, all which drive the theme of the film ever forward).

There is, of course, a post WWII message I'll let you uncover yourself, giving the story a fascinating and needed complexity that the more straightforward bunkered-hostage pics don't really carry, even when they're as enjoyable as Bogart's breakout in The Petrified Forest.
Posted by The League at 6/01/2019 01:32:00 AM