Longtime readers will remember that at one point I watched the now weirdly undiscussed series Lost, and during that period, I may have "lost" interest in the proceedings of the show, but, hey, it still kinda starred Elizabeth Mitchell as Juliet - the only character not as dumb as a bag of rocks.

Well, Ms. Mitchell has had a varied career since Lost burned to the ground and sunk into the swamp, and, hey, she remains an actress in demand.  And we are delighted that Ms Mitchell could star in one of these films to bring a little gravitas and acting that doesn't feel like the Spring Texas Playhouse Community Theater's production of Picnic.

There's some plot about this guy who is a real estate something who is working for a really enthusiastic fellow named Greg, and they basically buy Elizabeth Mitchell's dance studio out from under her with Mitchell's big, annual Christmas performance about to happen.  There's a lady who is magical, something about her $20 bill of the travelling pants which makes things happen, and the power of fate or something.  I dunno.  I forget.  I was mostly just seeing how Elizabeth Mitchell looked in a wide array of cozy looking outfits.

They decorate cookies, there's a misunderstanding, and a husband who has passed (no one is just divorced on these shows anymore - too messy), and a moppet of a kid who scoots off frame whenever mommy needs to make eyes at the guy.  I dunno.  Pretty standard Hallmark movie stuff.

Oh, and the house they show for the exterior of her place is maybe 1000 square feet, but it's an easy > 2400 sq ft inside.   The kitchen alone is bigger than the house they show.  Elizabeth Mitchell lives in a Tardis.  As it should be.

Oh, yeah, also, I forgot what a Christmas Club is - basically a Christmas savings account so you can pay cash eventually for your Christmas.  I have no idea why this is the title of the movie.

But, hey, look how great Elizabeth Mitchell looks in a red coat! 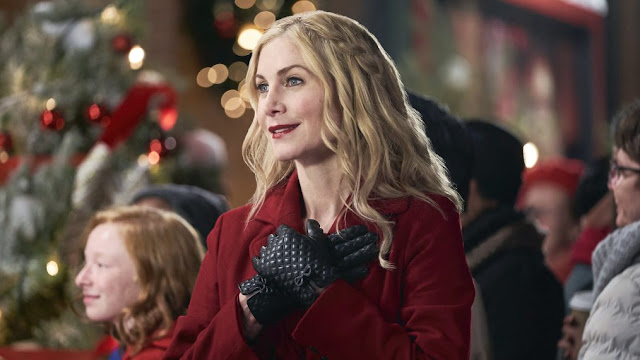 The magical old lady (who is not actually old, but bear with me) with $20 turns out to be Mrs. Clause, btw.  It's always Mr. or Mrs. Clause making sure some lonely small towners are making sweet, sweet (totally chaste and never discussed or hinted at) love by Christmas Day.  Why this is something they care about, I do not know, but I like that they're keeping things fresh in the minds of the low-key horndogs at Hallmark.


Anyway - this was a thing I sort of watched.

Oh, hey, now that is a nice blue scarf.