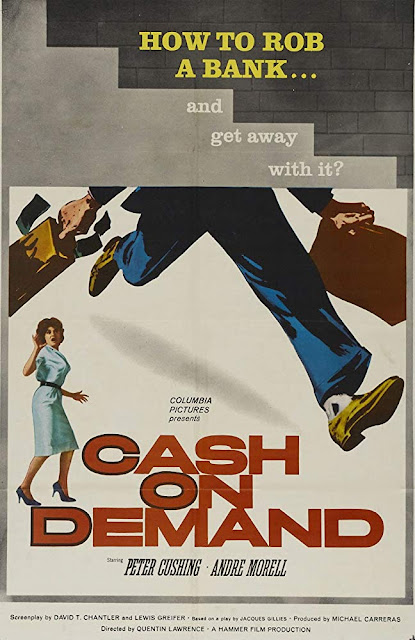 
Starring Peter Cushing as a deeply uptight bank manager who believes in efficiency above all else, and Andre Morell as a cunning (and charming!) bank robber, much of the production is a two-man show as Cushing and Morell face off, in the quiet days just prior to Christmas when the bank is carrying a very large amount of cash.

Other players include Richard Vernon as a sort of put upon victim of Cushing's bullying management, Norman Bird as a teller and Kevin Stoney as an Inspector.

Posing as a security expert from the insurance company, Morell works his way into the inner office of the bank, which leads to the vaults.  Alone with Cushing, he reveals his plan and that he has accomplices holding Cushing's wife and son and will electrocute them if Cushing raises any alarm and does not participate.

It's a fascinating film as the villain of the piece is clearly the robber, but he's the one with the kinder heart and more interested in the lives of the bank employees than their own boss.  There's certainly a Christmas Carol thread to the story, wrapping Marley and all three ghosts into the singular package of the robber and Vernon's character as Bob Cratchit.

Mostly, the thing is just remarkably well performed - and is a tight heist film on top of it.  Some enterprising person could do well to turn the small production into a play, maybe even a two or three-man show.  But it's hard to think of anyone else who could pull off what Cushing can, switching between SOB and sympathetic believably from moment to moment.