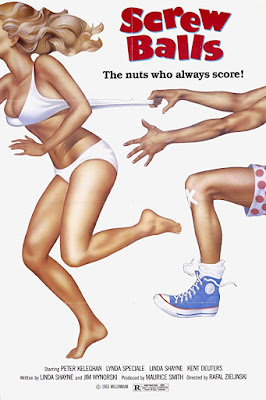 Back in the day, Hollywood settled upon a few formulaic items which generated endless, cheaply produced and ultimately very profitable movies.  Some took place in college, some in high school.  All were wildly horny, Rated-R and intended for a high school audience.  One such formula developed that deeply owed a debt to Animal House wherein a group of misfit dudes got up to increasingly randy, episodic shenanigans in pursuit of good times and bad sex.  The movies were an excuse to put boobs on screen, have young talent who couldn't act do Tex Avery character impersonations, lean into misogynistic and often racist stereotypes and somehow never quite be either as funny or sexy as you were figuring on.

Some of the movies went on to some sort of well-known (if not well-regarded) status, like Revenge of the Nerds.  But many, many of them existed in a purgatory of endless premium cable replay and giggly VHS rentals.  They weren't good, but it was a chance for many of my classmates (and sometimes myself) to see a boob, and the sophistication hit us about right in 7th grade.

Still, honestly, I didn't see many of these types of movies.  And by the time I did, they were edited for USA Up All Night (by way of which I saw movies like H.O.T.S.).  We didn't have HBO except in weird sporadic chunks when my parents were feeling generous, and then it would be taken away abruptly, and I was never sure why.  But it means, I am not overly familiar with, say Hamburger: The Motion Picture or Hot Dog: The Movie.  I hadn't seen Porky's until the last three years, and I found it mostly boring and bad and lacking in screentime for Kim Cattrall.  At school, I just mostly knew I was missing a lot of references kids who had seen the movies were making.

Well, flash forward to a week ago when I noticed Screwballs (1983) was free to watch with my Amazon Prime subscription so I went ahead and added it to my queue, not sure when or if I'd ever watch it.  But I was working on trying to sew my own COVID mask and looking for something to put on I didn't need to pay attention to, so I hit play.

Like I said, I just caught Porky's and now this, because every once in a while I wonder "everyone talked about this movie back in the day, and I haven't seen it..." but I never seem to remember the people raving about these movies were 12.

Anyway, this movie is terrible.

I did make my mask, but only occasionally watched the movie itself.

I am alarmed to see that this is apparently one of 3 movies in the Screwballs Universe.   And I hate myself for watching this.