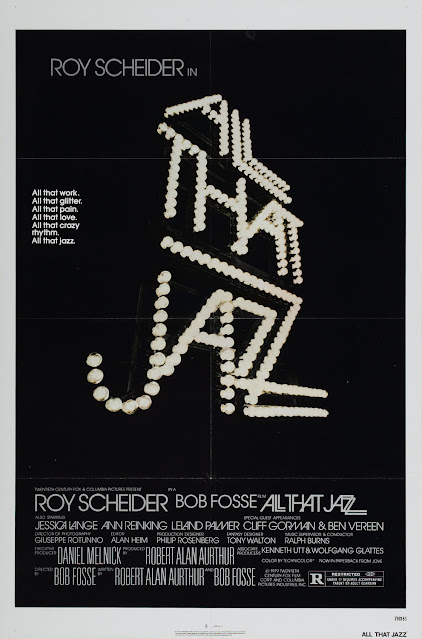 Watched:  09/15/2020
Format:  TCM on DVR
Viewing:  First (all the way through)
Decade:  1970's
Director:  Bob Fosse
Not that long ago I watched the FX limited series Fosse/Verdon, an FX television production following the later careers of Broadway and Hollywood director Bob Fosse and his ex-wife - famed performer, Gwen Verdon.  If you've not seen it, I can't recommend it enough.  It stars two of the greats of this era, Michelle Williams and Sam Rockwell, and features some amazingly nuanced performances by both, in a co-dependent relationship/ partnership that's bigger than a failed marriage.
I'm not a musical theatre follower - and certainly no historian of the second half of the 20th Century when it comes to musical theater or movie musicals, but it's not hard to see the impact Bob Fosse left on the form, and why everyone is still scrambling to keep up.  His stage show of Chicago (2002) managed to win Academy Awards when turned into a hit movie decades after his passing (1987).  And during his lifetime he was a huge part of the movement that made musicals relevant, updated dance on Broadway, and turned sexiness from something blushing and suggested to something overt.  And - he made the films Sweet Charity, Cabaret, Lenny, Star80 and All That Jazz (1979).
I'd seen parts of All That Jazz years ago, but on a channel that cut it for TV and for commercials, and given the flow, I threw in the towel with an intention to watch it all in one shot - which I never did.  But i did see enough of it to gather some basic facts - I figured it was a confessional auto-biopic from when "directed by Bob Fosse" came up, and saw what the film was about.  So I didn't go into Fosse/Verdon totally unprepared.
If you do plan to watch All That Jazz, which (I'll cut to the chase) I highly recommend doing, do it with a minimum of distraction and plan to watch it in one shot.  The film is a time-spliced montage of events, following a self-destructive director as he handles editing a film (a clear stand-in for Lenny), choreographing a show (a stand in for Chicago), tries to be a father, a good ex-husband with a wife with whom he's wrapped up with creatively, a lover to his steady and to anyone else who's game, a drunk, a pill-popper and a chronic smoker.  IE: It's Bob Fosse.
A few years off Jaws here, Roy Scheider plays Joe Gideon, our Fosse stand-in.  And seeing Scheider channel that undercurrent of intelligence and at-the-end-of-his-ropeness that you saw in Jaws into a man at war with himself is something really pretty incredible.
The film-costars Jessica Lange, maybe not a huge star yet, as a mystery woman consulting with Joe.  But it also has CCH Pounder, Wallace Shawn, John Lithgow and even Sandahl Bergman in small parts - before most of these names really meant anything.  And I assume pulled from the NYC Broadway scene of the time.  Ann Reinking, who you know best from Annie, plays Gideon's girlfriend, and Leland Palmer (who is fantastic, but who is in practically nothing else in movies) plays his ex-wife.  Child actor (allowed to play a child) Erzsebet Foldi, plays Gideon's daughter.
And, Ben Vereen, who would have been a name in 1979, plays an important and odd role.
The maturity from Sweet Charity to Cabaret was hugely impressive, but turning the story to your own life and expecting an audience to go along with it?  That's breaking one of the rules for every first-time writer.  And then making it work?  That's not nothing.  It's a wildly self-aware story, jiving with the facts of the matter - and not through the perspective of the storyteller positioning himself as someone terribly sympathetic.  He's charming, certainly, but it's someone who has been through something (as depicted in the film, Fosse wound up in the hospital after a heart attack that very nearly killed him) and has had time to reflect - and be honest with himself.
This is a musical, and as I've mentioned before - I lack the proper vocabulary or knowledge to discuss the structure or how it works in depth (and should probably fix that).  Fosse is a strange talent as a story teller - he comes from dance and choreography, but took to direction which understands character and story, and unlike the big, splashy shows of prior eras, he's in tune with actual, functioning humans, experience and all the messiness of humanity, but here and in Cabaret, he conveys story through song and dance as well as he manages the straight acting scenes. And in this film, because it's about a choreographer and director, you get the opportunity for some of that dancing to place not in the mind's eye, but the world as it is, but also the fantasy element of dance.
And while that's been true since Gold Diggers of 1930-whatever and 42nd Street (or name a musical from back in the day), the reality here is not just ingenues finding love and putting on a show.
And, of course, the choreography - whether it's the crushing cattle-call auditions at the opening - Gideon dancing with his ex as they talk shop - or Gideon's final sequences - is amazing.  And, of course, you're not like to forget the spark of genius that is the re-worked sequence for his dance crew.  And all of it is so well anchored by Scheider, who is utterly buyable in every scene.
Anyway - I dug the hell out of it.  I do recommend watching it before watching Fosse/ Verdon, which feels, in many ways, like an extended cut of this movie.  And a remarkable note of apology and love to the people who matter to someone who would live a few more years after the film, but ultimately be a victim of decades of his own vices.

How did you see it? I couldn't find it streaming.

You can always see where I watched something in that little bit at the beginning under "Format". In this case I recorded it off TCM on my DVR, because I believe in basic cable.

TCM items are sometimes available on HBOmax or Criterion Channel, but I'm not finding this movie there. This is why I believe in actually purchasing copies of movies if you care about them longterm, btw. I don't trust any of these services to maintain a decent library.

Here's a laserdisc for about $8. https://www.amazon.com/ALL-THAT-JAZZ-LASERDISC/dp/B00EENHKFW/ref=sr_1_14