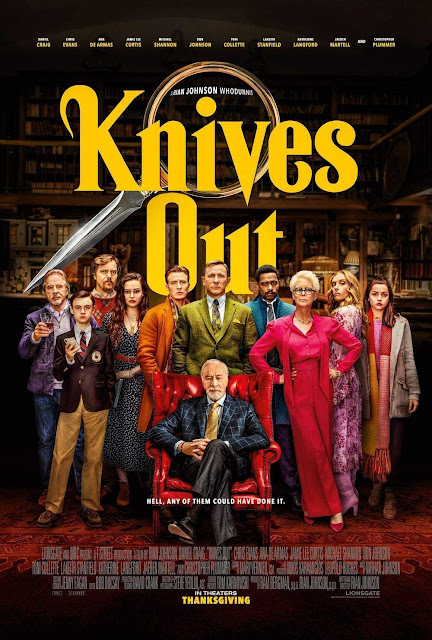 Watched:  11/21/2020
Format:  Amazon Prime Streaming
Viewing:  Second
Decade:  2010's
Director:  Rian Johnson
Rian Johnson is one of those directors we need more of.  He's smarter than his audience (sorry, he is), and he's making stuff he'd want to see, and if we happen to come along and like it, too, great.  If not, it doesn't matter.  He made something *interesting*.
On the heels of his stupidly controversial gigantic Star Wars movie that followed his usual way of doing things and managed to make maybe the only interesting Star Wars movie since Empire, he turned to the all-star murder mystery - a la Inspector Poirot films.  But not a murder mystery that relied on nostalgia, an exotic setting and romantic period in which the film occurs.  It's a family all brimming with motivations to take out the patriarch as they gather in the family a mansion in a wealthy Massachusetts suburb.
The deceased patriarch (a vigorous Christopher Plummer) is a mystery novelist himself, but he's left no clues as to why he would have killed himself - only the evidence suggesting that he did, on the night of his 85th birthday party.  His children and their spouses have been spoiled by their father's success - refuse to admit to others that they didn't find success entirely on their own (or that Dad may still be footing bills).
Yes, on a second viewing, I was once again dazzled by the all-star cast - all turning in terrific performances (Daniel Craig, Chris Evans, Jamie Lee Curtis, Michael Shannon, Don Johnson, Toni Collette, Riki Lindhome).  And, yeah, absolutely the script which works like an amazing Rube Goldberg Machine/ Swiss watch, providing an amazing dazzle at the finale in the best of Thin Man or Poirot style as the solution is laid out before us, always there all along.
On this viewing, two things I got the first time really hit home for me as the primary drivers of the film - and fascinating commentary to code directly into our operations for a murder mystery, which usually only pokes at upstairs/ downstairs politicking at best.
1) the film doesn't just use Marta's status as the child of an immigrant as a plotpoint - the film is one long analogy for White America's relationship with the immigrants who live among us, and how we view our unearned privilege, imagining we built each of our personal empires ourselves.  And the abject helplessness of the children of privilege, even as they shuffle off their filial duties to paid help.
2) film after film (and all of reality television) is about outgaming one another, about being more devious than those who would hurt us.  But Marta's inherent desire to help is, in fact, the right choice again and again - even when others subvert her or deny her ability to take action.  She is truthful to a fault.  She seeks to heal those who she thinks would hurt her.
Within the workings of this great murder mystery is a remarkable parable - and I think we all felt that while watching.  But rewatching reminds me that this film has a lot more going for it than lots of stars and a neat magic trick of detective fiction.  We already have our Agatha Christie mysteries and our weirdly un-filmed Hammett mysteries, so finding anything new to add to the mix of stuff people remember or appreciate beyond the theatrical window is going to take some doing.  Frankly - I think it's how well Johnson baked in these ideas that will mean this movie will continue to be found and considered by film nerds for decades to come.  Come for the star cast - stay for the commentary.
And, while he is no way cajun, there are scenes of Daniel Craig as Blanc where I'm like: hey, it's JAL.